As a kid, I cut my teeth on typical American-Chinese fare such as mu shu pork and and General Tso's. My mother made a lovely version of Wo Hop's* ruddy sweet and sour pork, a cloying, syrupy concoction that I loved through my adolescence.

*The Chinatown restaurant in New York.

But the older I got, the more I dismissed those sweet and sour flavors with a wave of my chopsticks in favor of the ma la fireworks of Sichuan cuisine.

It's taken me over 30 years to regain my childhood respect for, and develop a deeper appreciation of, those sweet and sour tastes. Wo Hop and the corner take out joint aside, the union of sweet and sour is one of the most iconic flavors of China's food culture, just as important as chili-blasted pork and ginger-steamed fish.

As with most of my revelations about regional Chinese food, this epiphany took place in the Chinatown of Flushing, Queens. That's where I first encountered the food of Dongbei.

Dongbei, better known as Manchuria, stretches up toward Siberia from Beijing. It encapsulates Liaoning, Jilin, and Heilongjiang provinces, and in Harbin, Heilongjiang's capital, winter temperatures drop well below freezing. While Southern China favors delicate flavors and abundant produce and seafood, Dongbei cooking is more hearty and meaty to bulk up against the cold.

The region's name literally means "East-North," and it is in fact bordered by Russia, Mongolia, and Korea. The latter's influence in the kitchen is immediately apparent at the start of every Dongbei meal. Along with Chinese tea you'll find an abbreviated spin on Korean banchan placed on every table. One dish contains crunchy, chili-tinged suan chao tu dou si, a sour potato slaw of sorts, and the other is a lightly pickled cabbage that calls to mind a sweeter, less intense version of kimchi.

Unlike in other parts of China, wheat, rather than rice, is the staple starch, so noodles, dumplings, and flatbreads play a big role in everyday eating. Corn, ground into flour, makes its way into rustic breads, too.

The hearty food of Dongbei was virtually unknown outside of China until a decade ago, according to Chinese food expert Jaqueline M. Newman, the editor and publisher of the Chinese food journal Flavor and Fortune. These days, though, Dongbei-style restaurants keep cropping up in cities with big Chinese populations like New York and LA. It's certainly the case in Flushing, which is where you'll find Fu Ran, something of a grandaddy of Dongbei restaurants in the United States. That is where I had my first taste of the cuisine to make me sit up and take notice, a little something called "Muslim lamb chop," or mu su lin yang cai.

"Chop" is a delightful misnomer. As Serious Eats has noted before, the dish is actually a rack of lamb ribs that's braised, deep fried, and then encrusted in cumin, chili flakes, and white and black sesame seeds. I've had my share of Sichuan-style lamb and cumin dishes, but this is one where cumin takes equal billing with the meat. A veritable boatload of the fragrant spice encrusts the exterior. Beyond that crust lies red-tinged meat and bone along with bits of snow-white fat, all packed with wonderful lamb flavor.

Fu Ran makes few compromises to American palates, so it was with some surprise that I noticed dishes at the next table that looked an awful lot like moo shoo pork and pork in orange sauce. But just like General Tso's chicken and tikka masala, some Westernized "ethnic" dishes take their cues from legit cuisines, and the spirit of sweet and sour is strong in Dongbei.

The Sweet and Sour Connection

Among Dongbei cooks, it's said that you're nothing if you can cook the whole range of Northeastern cuisine but not guo bao rou, fried pork cooked in a sweet and sour sauce. Those who master the dish are instantly qualified to open a restaurant.

One can see why after tasting a proper sweet and sour pork. Unlike its bastardized American cousin, guo bao rou is not cloyingly sweet. It consists of thin pork cutlets coated in potato starch batter, usually fried twice, then tossed in a sauce made from rice vinegar, rock sugar, ginger, and garlic. "Forget all those sickly-sweet, bright red sweet-sours you may have tasted in other Chinese restaurants," Fuchsia Dunlop writes of a properly made guo bao rou at Manchurian Legends in London.

The dish can be traced to the early 20th century, when Zheng Xingwen, a private chef for the Harbin government, stir-fried pork in a hot wok, then poured on a thick, salty sauce so the meat absorbed its flavors, giving the dish its original name, literally "stir-fried pork in the wok."

After some Russian guests found the dish too heavy, he changed up the dish by introducing the now-iconic sweet and sour sauce. The Russians were delighted, and today it's often rendered on menus as pork in orange sauce, as it is at one of my favorite Flushing haunts, Lao Dong Bei.

I think of guo bao rou as gateway Chinese food for my less adventurous friends. The same restaurant also does an amazingly good version of "chicken in orange flavor," or chén pí jī, fried and coated with hot sugar syrup. Crunchy and sweet bits of chicken are interspersed with fragrant dried orange peel and chilies.

Sing a Song of Suan Cai

Harsh winters and relatively short growing seasons have made pickling a common form of food preservation in Dongbei. Pickled cabbage, or suan cai, is traditionally made by most households in giant clay vats.

So revered is suan cai that people from Dongbei are fond of saying, "Suancai is wicked good!" In 1999, the crunchy sour cabbage, which bears more than a passing resemblance to sauerkraut, was immortalized in a jaunty pop tune called "All Dongbeiren Are Living Lei Fengs," which included the line "Cuihua, serve the suan cai!" Cuihua, a common rural Dongbei girl's name, immediately became synonymous with "waitress."

At my home in New York it's only slightly warmer than Dongbei. Lately I've been enjoying my share of sha guo suan cai dun fen tiao, or sour cabbage with rice noodles and pork belly. Sour, mellow, and hearty, it's a dish that seems as fitting of a German table as a Chinese one.

More Dongbei Dishes You Should Know

Di san xian: Commonly rendered on English menus as "triple delight vegetable," this trifecta of stir fried potatoes, hot green peppers, and eggplant slicked in a slightly sweet soy sauce is a hearty Dongbei classic that warms both palate and body. The name loosely translates to "three delights from the earth."

La pi (green bean sheet jelly): A cool tangle of wide, flat mung bean noodles served with various accoutrements makes for a refreshing salad of sorts, and a test of chopstick skills. At Xiao Dong Bei in Flushing, "green bean sheet jelly with special sauce" consists of the noodles topped with strips of egg, wood ear mushrooms, pork, chili paste, and carrots. Over at Fu Ran they make a similar "country style" version as well as green bean sheet jelly in red oil, which entangles the slippery noodles with chunks of cucumber, fresh cabbage, and peanuts, slicking the whole lot with a chili oil dressing with just a hint of sweetness. Oddly enough, in LA's San Gabriel Valley (which along with Flushing is a stronghold of Dongbei cuisine in the U.S.), the dish is mistranslated on menus as "sheet of tiny green beans."

Jian jiao gan dou fu: Swatches of dried tofu skin tossed with green hot peppers in a mellow sauce of slightly thickened chicken broth. The knots of skin have a mild beany taste to fill out your meal.

Xiao ji dun mogu (baby chicken stew with forest mushrooms): A hearty stew that comes to the table bubbling and redolent of star anise. Slurping the noodles and sipping the rich anise-scented broth will surely warm your bones. In the wintry northeast of China, a mushroom harvested from the prehistoric Daxingan Valley is often used to prepare this dish.

Ji gu jia (chicken backs in cumin and chili): The perfect Dongbei drinking food. Find them on English menus as "smoked chicken bone." Coated in cumin and chili and served cold, this boneyard of necks, backs, and breasts is worth gnawing through. Wash down ji gu jia with an ice cold Harbin beer.

Ba si: These fried chunks of apple, taro, or sweet potato tossed in molten caramelized sugar are a signature dessert. Dunk them into the bowl of water and caramel coating hardens into a candy shell, trailing wisps of sugary filaments, and encasing a still-piping-hot interior.

More Than Ma La: A Deeper Introduction to Sichuan Cuisine »
The Secrets of Cantonese Cooking, America's First Chinese Cuisine »
A Song of Spice and Fire: The Real Deal With Hunan Cuisine » 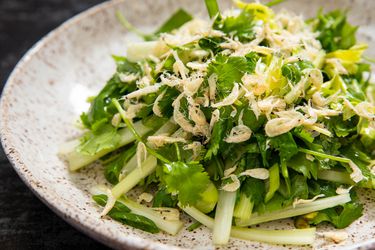