"I especially like the way the stretchy, creamy melted mozzarella stretches out with a kind of sheath of tangy tomato sauce coating it."

A couple weeks ago I took a detour through Trenton, NJ on my way to South Carolina in the hopes of completing a quest that Slice correspondent Nick Solares started last year. Namely, to visit Papa's Tomato Pies, America's second oldest pizzeria (second only to Lombardi's in New York*, but more importantly, the oldest continuously running pizzeria in the country. Since 1912, it's been in the same location, run by the same family.

*Though there is some dispute.

Alas, I should have read Nick's piece more closely, because I fell victim to the same blunder: I arrived there when it wasn't open.

Seeing as Nick had already checked out and written up two of its competitors, De Lorenzo's Tomato Pies and Palermo's, I did the only logical thing and visited the third of Papa's major competition: DeLorenzo's Pizza.

These days, Rick DeLorenzo Jr., son of the original Rick is the guy in front of the oven slinging the pies, and from what I gather, he's there every single day. He was quite friendly when I walked in, inviting me to take pictures of him at his game (although he was a bit standoffish when I asked him about the "other" DeLorenzo's)

Having never tried a tomato pie before, I had him go through it step-by-step. Unlike a New York-style pizza where the sauce goes directly on the dough and the cheese goes on top, a Trenton-style tomato pie is built with the cheese underneath and the sauce on top.

The dough is stretched pretty thin by hand, then Rick sprinkles it with a bit of crushed garlic and a sparing amount of grated mozzarella. I was gonna go all tomato, but Rick recommended I try the sausage, which is applied raw in little nuggets. Rick employed a method I hadn't seen before: rolling each ball of sausage in a bit of flour on the counter before adding it to the pizza. It apparently keeps the sausage from sticking to your hands, and helps to stem some of the flow of juices out of the chunks as they bake.

The sauce—which is simply roughly pureed imported Italian tomatoes—is applied in rough swirls and splats, allowing plenty of the cheese to peek through. (This isn't my olive pie, but it's the only good pic I got of sauce application. )

The whole thing gets sent into a moderately hot deck oven, where it bakes for about fifteen minutes.

It's a pretty magical transformation that happens during that brief stint. Cheese and tomato meld together into a saucy, slightly soupy and really delicious topping. The sausage chunks are excellent; juicy and spiced just well enough.

I especially like the way the stretchy, creamy melted mozzarella stretches out with a kind of sheath of tangy tomato sauce coating it. That doesn't happen with tomato-first-cheese-after pizza.

If there's one complaint to be made, it's in the crust. I mean, cracker-like is one thing, and I can live with that, but the crust here was pretty bland on top of that—a bit more salt in the dough would have worked wonders.

Nevertheless, this is pretty awesome pizza, especially because you eat it with the knowledge that you're tasting one of the oldest pizza styles the country has to offer.

Oh, and in case you were wondering: 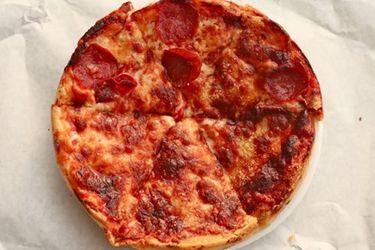