We've got plenty of grilling season left, but by this point in the summer I wouldn't blame you for being in a little bit of a culinary rut. Even the best grilled meats and vegetables are going to get boring if you eat them over and over again. One of the easiest ways to breathe new life into grilled foods is to serve them with flavorful dipping sauces. I'm talking garlicky aioli for grilled asparagus, parsley-flecked chimichurri for steak, tamarind-spiked peanut sauce for chicken, and more. If you need a little inspiration to stay excited through Labor Day, we've rounded up 21 of our favorite cookout-friendly dipping sauces.

There really is no reason not to have this super garlicky sauce around all the time, since it goes on everything and anything. But it is particularly delicious when spooned on top of anything that's got grill marks, particularly meats. The best part? It lasts for months in the fridge, so be sure to make a whole bunch to last you through grilling season and beyond.

Get the recipe for Traditional Toum (Lebanese Garlic Sauce) »

While xató most likely refers to a salad made from endive or chicory and topped with a romesco-like sauce made from red peppers, cured fish, and almonds, the sauce itself is just as good on grilled vegetables and fish as it is on the salad. Our version incorporates grilled vegetables and lightly grilled nuts, which amplifies the smokiness and makes it an even better pairing for the stuff coming off your grill.

Get the recipe for Xató »

Think of molho à campanha as a Brazilian pico de gallo; it's very similar in terms of ingredients, but instead of using citrus, Brazilians add vinegar, and they also add in some fresh peppers to the vegetable mix. We pair the sauce in this recipe with grilled fish, but it is just as good on grilled meats of all varieties.

I don't know about you, but I wouldn't think about making satay without a peanut sauce. This one combines the peanuts with mouth-puckeringly sour tamarind concentrate, soy sauce, and curry paste. We save time by using store-bought curry, but then spend some of that saved time pounding the sauce by hand with a mortar and pestle.

If you've ever made our two-minute mayo, you've gone most of the way towards this quick aioli. The recipes are almost the same, but we leave out the mustard and replace half the vegetable oil with olive oil. An immersion blender will make olive oil taste bitter, so we use it to combine all the other ingredients and then whisk in the olive oil at the end.

Get the recipe for Two-Minute Aioli »

Before you put away the immersion blender whip up a batch of Choron, one of the absolute best sauces for steak. The sauce is based on Béarnaise, a variation on Hollandaise made with white vine vinegar, shallots, and tarragon. To make Béarnaise into Choron we blend it with a light fresh tomato purée.

Most Arab food falls pretty low on the Scoville scale, but this Yemenite hot sauce is an exception. It's richly flavored with coriander, cumin, cardamom, garlic, and parsley and gets serious heat from Thai bird chilies. Zhug is the perfect addition to a falafel sandwich, but would also be at home on grilled fish.

If you feel like zhug looks familiar, it's probably because it bears more than a slight resemblance to chimichurri, an Argentinian sauce often served with grilled beef. The sauce is made of olive oil, parsley, garlic, and oregano, plus tangy red wine vinegar and just a dash of red pepper flakes.

Get the recipe for Chimichurri Sauce »

Another olive oil, parsley, and garlic sauce, this mojo is made with mint, capers, shallots, and citrus juice—sour orange juice is traditional, but a mix of orange and lemon juice will work in its place. If you're looking for a non-grilled cookout side, try this with sweet, crispy fried plantains.

Pesto is best known as a pasta sauce, but it's just as good spooned over grilled vegetables. Ours stays pretty basic with basil, pine nuts, garlic, salt, olive oil, and cheese (Parmigiano Reggiano and Pecorino Fiore Sardo). What makes the recipe special is preparing it with a mortar and pestle, which produces a smoother sauce that verges on creamy.

Get the recipe for The Best Pesto »

For a more unusual pesto, try this version made with a variety of fresh herbs—cilantro, basil, parsley, and mint—and either pistachios or walnuts. The recipe is 100% vegan thanks to the addition of miso paste, which has a savory, nutty flavor that stands in for Parmesan.

This pesto is made with toasted almonds and fennel—we keep the fronds raw but roast the bulbs to drive out some excess moisture and break down their starchy texture a little. Pounding together fennel and almonds by hands is a pain, so feel free to break out the blender or food processor for this one.

Get the recipe for Roasted Fennel Pesto With Fennel Fronds, Toasted Almonds, and Garlic »

These next few sauces were developed for dumplings, but would be a fantastic addition to a cookout. This one is made with intense kimchi paste that we thin out with butter and sweeten with honey (we also add sesame seeds to make it just a little nutty). Try it on grilled chicken—you won't be disappointed.

You could do worse than serve ponzu—a Japanese sauce made from citrus, seaweed, bonito flakes, mirin, and vinegar—as a dipping sauce on its own. Here, though, we mix in more mirin to give it a better consistency for dipping, as well as ginger, scallions, and sesame oil for extra flavor.

Our take on a classic Thai-style dipping sauce tames the umami-rich kick of fish sauce with lime juice, sugar, garlic, cilantro, and chili flakes. You can definitely serve it as a sauce, but also make extra to marinate your steaks before throwing them on the fire.

If you're grilling up pork chops, this is the sauce for you. It's made with Chinese fermented black bean paste—a salty, funky condiment that we balance out with sweet maple syrup, creamy peanut butter, and spicy chili oil. The paste is thick, so you'll also need a splash of water to make it dip-able.

While this sauce is meant for fried chicken, it'd be at home on a grilled bird too. It's made with a base of soy sauce, rice wine vinegar, and sugar and flavored with garlic, scallions, cilantro, and toasted sesame seed oil.

Get the recipe for Sweet Soy-Garlic Dipping Sauce »

Guacamole's tangier cousin, guasacaca is a Venezuelan dip made with avocados, vinegar, and a variety of other ingredients. Our version is made with onion, bell pepper, cilantro, parsley, jalapeño, garlic, and lime juice. We keep the texture thick enough to scoop up with a chip but thin enough to use as a sauce.

Get the recipe for Guasacaca (Avocado Salsa) »

This dip takes inspiration from Kansas City barbecue sauce, mixing ketchup with brown sugar, apple cider vinegar, barbecue rub, and more. The result is sweet, tangy, and a little spicy, but not strong enough to overpower the meat or vegetables you dip into it.

Get the recipe for Barbecue Ketchup »

I saved one of the best for last—this sweet, spicy, savory dipping sauce will steal the show at your next cookout. The recipe is a fairly simple mix of fish sauce, vinegar, lime juice, sugar, garlic, and tons of Thai bird chilies, but those few ingredients turn into something magical.

Get the recipe for Thai-Style Sweet Chili Dipping Sauce » 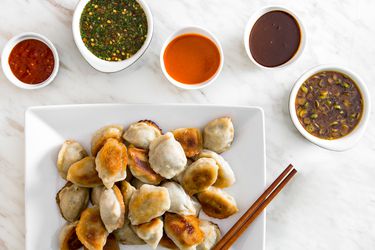