David Lebovitz is one of the best: a great cook and pastry chef, a talented writer, a skilled photographer. If you haven't read his My Paris Kitchen, do. (It's worth checking out his piece on how the book came together, too. The book offers more than just (many) tantalizing recipes: it's heaped with stories of real life in Paris—scenes from charcuterie stands and olive shops, doctor's offices, cafés, and dinner parties.

It felt a bit cruel to ask Lebovitz about his favorite books—he lost his precious collection of autographed cookbooks in the process of moving to Paris—but I was curious about the writers that inspire him these days. Here's what David Lebovitz looks for in a cookbook, and a few thoughts on his favorite authors.

How many cookbooks do you own? To be honest, I've completely lost count! Before I moved to Paris, I had to weed my massive collection out and sold a bunch of them, gave a few cases away, and stored the ones that were nearest and dearest to me in a storage locker. About a dozen cases. (And, of course, there are the two cases of personally signed cookbooks to me, from the likes of Julia Child and James Beard, that I shipped to France back in 2003, that I'm still waiting for...)

In Paris, because space is at a premium, and I lived in a very small apartment that used to be a maid's quarters (who apparently didn't collect cookbooks), I kept my own cookbook collecting to a minimum. Well, until I moved to a larger place. (And my partner built me a huge bookshelf!) However, that's already full and I have at least five or six stacks of cookbooks on the coffee table, the floor, on the kitchen counter, next to my bed, and one place I'd rather not mention. But I'd say I have at least two hundred in Paris. Time to move again?

What do you look for in a cookbook? Unlike a lot of people, I don't need a lot of pictures. People seem to be hysterical about lots of photos in cookbooks these days. One reason that that's not really a priority for me is that a number of books with a lot of pretty pictures have been styled by food stylists, and often bear little resemblance to the finished dish. So what's the point?

I like to read recipes that have the author's voice in them. That's what distinguishes them nowadays. There are a gazillion recipes for roast chicken and Oreo-stuffed red velvet cupcakes in books and online. But I want to know why the author makes the dish (well, except maybe the Oreo-stuffed red velvet cupcakes...), how they came about making them, and I want to hear (or read) the author's voice speaking to me as I make the recipe.

"A cookbook should have a reason to exist. I'm interested in the story of the book and the author."

A cookbook should have a reason to exist. I'm interested in the story of the book and the author. Why did they write this book? What is their unique perspective on the topic? What are they bringing to the subject that's new, interesting, or relevant? What makes this person special? I want to hear the author's voice when I read a cookbook.

Yotam Ottolenghi and Sami Tamimi are good examples of that; they have an unusual background and present unique, inspiring takes on Middle Eastern and North African dishes. Alice Medrich fascinates me because she is inquisitive, always wondering why something works better than another ingredient, and you can feel her going the process of coming up with the recipe when you're making it.

I also am, of course, a big fan of The Zuni Cafe Cookbook by the late, great Judy Rodgers—I always learn something when I open that book. And the Chez Panisse books by Alice Waters, because she, the restaurant, and the philosophy, were always inspirations and a big part of my life as a cook.

What cookbooks have really inspired you lately? I've been enjoying books that explore different cuisines and cultures, some that might not be so familiar, and make them accessible. Pomegranates & Pine Nuts by Bethany Kehdy, Simple Thai Food by Leela Punyaratabandhu, and Coming Home to Sicily by Fabrizia Lanza are close to my kitchen.

I spent some time in Sicily this past year and last, and the Middle East, and those books have helped me understand the ingredients, and recreate the foods that I had there. Bethany's book makes the food accessible, but digs a little deeper into Middle East and North African culture.

Good Thai restaurants are scarce in Paris, due to the locals' timidity about eating highly spiced and seasoned foods (although my Parisian partner told me it's his favorite cuisine), and getting the ingredients isn't as easy as it is in other places, so I'm hoping to make some of the Thai recipes in Leela's book shortly. She presents a few shortcuts for those of us with limited resources, but still maintains the authenticity of the dishes.

I also keep picking up Tartine Bread, thinking that I'll finally get around to tackling that bread recipe. But so far, I've just been admiring the pictures. And wishing I could make bread like that. Someday...

What are your favorite cookbooks for desserts and pastry? Any favorite recipes from them? Bakers who I've trusted and relied on for years include Maida Heatter, Nick Malgieri, Dorie Greenspan, Alice Medrich, Flo Braker, Marion Cunningham, Matt Lewis and Renato Poliafito (of Baked in Brooklyn), and Carol Field have been very influential to me. They write with just the right amount of clarity, without making one terrified to bake something. I've learned a lot just reading their books, and have been inspired by them.

The raisin-cranberry pie in The Fannie Farmer Baking Book by Marion Cunningham, has been an annual favorite around the holidays. It's not fancy, but the two humble ingredients work perfectly together, and tastes very special once baked. (Thanks, of course, to a generous dose of orange liqueur.) I've made a lot of the Italian cookies in Carol Field's The Italian Baker over the years, the cornmeal zaletti are a favorite. And Dorie Greenspan's French apple cake is always a hit.

What cookbooks do you turn to when you need comfort? I cook Mexican food, so turn to those recipes when I want to feel right at home. Being from California, Mexican food is our "soul" food, so to speak. And I love making a big pot of carnitas, and serving it with rice, beans, and Mexican-style crema, which I replace with crème fraîche. I don't really use any recipes, specifically, but I enjoy reading Fany Gerson, Diana Kennedy, and Deborah Madison, who has a lot of recipes from the Southwest that share the same ingredients with Mexican foods.

Any favorite cookbooks for recipes for entertaining? I'm terrible at entertaining. I have a restaurant cook mentality and don't believe you can feed a lot of people unless you're really well-prepared and completely stressed out. So I stick to braises and long-cooked dishes. I make the Caramel Pork Ribs and Lamb Tagine with Moroccan spices from My Paris Kitchen, because they are tried-and-true recipes, and you just pop them in the oven for a few hours—give or take—and let them simmer to perfection. (Plus Parisians are always late for everything, including dinner, so those dishes give you plenty of leeway.) 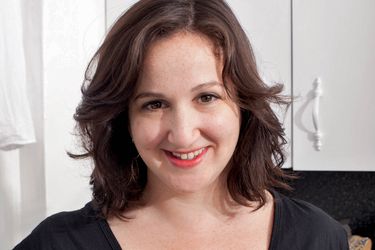