I used to call Thanksgiving an overrated holiday, because I used to be a contrarian twerp in desperate need of a canned-gravy waterboarding. Lucky for me, I came to my senses before any advanced persuasion techniques were applied, and I now freely admit it is impossible to overrate a five-day weekend built around football and gluttony. Thanksgiving is the best!

Thanksgiving food, however, doesn't live up to the hype. It's fantastic in that there's loads of it, but I still maintain the actual food items lack some of the luster we ascribe to them.

Raise your hand if your favorite pie is pumpkin. Now use your other hand to pinch yourself for being a dirty rotten liar. If pumpkin pie were so special, we'd eat it year round, or at least more often than we do. Same goes for the centerpiece: turkey is cheap, plentiful, nutritious, and easy to cook (step back, briners, fryers, 'duckeners, and spatchcockers: I'm referring to the way most people cook turkey, i.e., pop it in the oven for half a day, hope for the best, and settle for the good-enough). So why don't we cook turkey in March? Because we don't really love it as much as we pretend to.

The most damning evidence against the traditional Thanksgiving meal is the popularity of the leftovers. We like the full spread on Thursday primarily because it's so easily repurposed between a couple slices of bread Friday through Tuesday. Essentially, we prize Thanksgiving food for its thereness.

In recent years, sandwich shops across the land have capitalized on our faith in Pilgrim food to push all manner of Thanksgiving sandwiches on us. The logic is solid: We eat plenty of turkey sandwiches year round, because that's what turkey's good for. It makes for a benign condiment holder during a fast, cheap lunch. Then you factor in that most people like stuffing and cranberry sauce, and gravy improves all foods that cross its path, and voila, a seasonal premium sandwich is born.

I tried the Panera version last month and good golly was that a disaster. (Aside to those familiar with that sad song: Panera headquarters got wind of the situation, apologized, and offered a gift card. I declined the gift card but will give the chain another go once the initial trauma fades.) But for all my kvetching, I love a good leftovers sandwich more the next guy, so I was happy to try the D'Angelo Thanksgiving Toasted.

D'Angelo is a chain of 155 sandwich shops scattered throughout New England. It was founded in 1967 in a Boston suburb, and it almost went national in the early 1990s after being acquired by the Pepsi/KFC/Taco Bell beast, but by 1999 it had been sold to New England pizza chain Papa Gino's and has since embraced its role as regional star. D'Angelo remains strong because it specializes in steak, which helps it from being subsumed by Subway, as most discerning palates agree that steak tastes better from the griddle than from the microwave.

For $6.99, I got a medium (8-inch) sub of thick-sliced turkey breast, stuffing, cranberry sauce, and mayonnaise. The bread was well toasted all the way around, not just flash-heated on top as per the fast food norm. It got a little spongy at the point of contact with the fillings, but that's the fault of neither the bread nor the toaster: It was inevitable given the preponderance of cranberry jelly, mayo, and wetter-than-ideal stuffing.

The turkey was generous and fine, though a bit tough and stringy and also the lone cold element in an otherwise warm sandwich. The bread was singed along the split, suggesting a sandwich that had been fully assembled prior to going in the oven on its spine and closing up a bit; since the turkey was in the middle, it was the farthest from the heat. No big deal; the gravy was hot.

The stuffing felt eerily similar to too-loose scrambled eggs, but it was full of flavor. It was herby and peppery and seemed to have been simmered in chicken broth. The cranberry sauce was uncommonly mindful of the fact that cranberries aren't born sweet, with a real-food tartness coming over the top of the added sugar. The side of gravy was hot (rather than warm) and savory, which is all it needed to be. With heavy-handed application of cranberry and mayo, condiments were definitely in the foreground, but that's acceptable in a sandwich whose other components are turkey, bread, and another kind of bread. D'Angelo's Thanksgiving Toasted is very good. 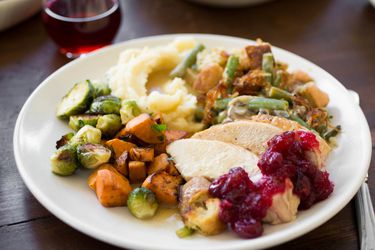 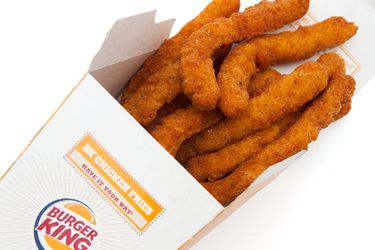