Foodblogs, as a rule, are borne of passion. I have explored pizza and hamburgers in passionate and mind-numbing detail on Slice and A Hamburger Today, respectively, but if I were forced to create yet another foodblog, I'd depart from the path of iconic American foods and look toward the East. That's because my third-favorite food is the Japanese-style curry known as "curry rice." For what it's worth, I actually did create a third blog to explore my other food passions, but it was short-lived; this ode to curry rice is from that site, but I thought I'd share it with you here on Serious Eats, as it's a perfect wintertime comfort food.

You'd think the Japanese would have come by their curry via India. Nosiree, Bob-san. Our mates the Brits took it from India and sailed with it to Japan in the late nineteenth century. In an early show of the ingenuity they would later gain renown for, the Japanese soon developed make-at-home versions of the sauce. When cooked, these curry mixes look more like medium- to dark-brown gravy and are a touch thicker and sweeter than their Indian cousins. Common brands found in the U.S. include S&B and House.

Japanese curry sauce is served over rice, no surprise, and in this configuration is known as karei raisu, or "curry rice"--as you may have guessed. As you may not have guessed, it is eaten with a spoon, not chopsticks.

So how did a Kansas-raised gaijin come by this dish? From a longtime friend and college roommate whose mom is Japanese. At some point in the mid-'90s, at one of the various apartments we lived in, this friend cooked up a batch of curry (using an S&B mix, as per his mom's recipe) and had me try it. Within a few bites, curry rice became my third-favorite food (pizza and tiny hamburgers, of course, holding down spots one and two).

Those of you familiar with curry rice will note that my version of the stuff looks a little different than that served in Japan or at Japanese restaurants here. My friend's mom didn't know how to cook when she came to the U.S., so her Japanese cooking is what he calls Midwestern-Japanese fusion. (Call it "hanbaaga helper.") This stuff, made from ten to 20 different spices, is delicious and strangely addictive. Fortunately, it's quite easy to feed such an addiction, if you should find yourself hooked on the stuff.

Start with a box of curry sauce mix (left). S&B is the most widely sold brand and is available in mild, medium, and hot; it can often be found in the "ethnic" aisle of large supermarkets as well as at Asian grocers. House Foods has several stylesVermont, Java, Kokumaro, among themalso available in mild, medium, and hot varieties. For a more authentic version, I guess you'd have to follow the instructions on the box. I'm going to detail how my Midwestern-Japanese fusion version is made.

Not only is Japanese-style curry delicious and easy to make, it's perfect for feeding a lot of people--or for getting several meals out of one cooking session; it can be easily frozen in individual portions for reheating later. To make it, you need carrots, potatoes, and onions.

First, sauté the onions in butter. It's probably not very Japanese, but hey, neither am I. I like to think the butter gives the sauce an extra richness, but who am I kidding? It's probably undetectable.

After the onions start to sweat and become tender and translucent, add the ground beef. One pound here. (Don't worry, weight worrywarts: It's for a batch with 10 servings.)

S&B is my go-to curry mix. House brand curry is another popular mix. It's cold outside right now, so here I'm using the hot variety. The curry-sauce mix comes in a plastic tray (left; click to enlarge) and looks like a bullion-cube candy bar. I don't recommend eating it like one. Doesn't the plastic tray look like a Barbie-size bathtub full of frozen gravy? One box makes one batch that serves five, but tonight, I made a double batch. The bar is segmented for easy break-apart action.

After the meat is browned, add potatoes, carrots, and the specified amount of water. You can add more or fewer veggies, but I know I've got it just right if the water comes up to the level of the vegetables in the pot. Bring to a boil.

Once pot starts to boil, add the sauce chunks. Here, two packages' worth of sauce mix for a double batch.

As the paste chunks dissolve and incorporate into the mixture, the sauce takes on the color and appearance of dog food, as a friend of mine put it. But trust me: It tastes much much better than anything a dog would eatwell, maybe not a dog spoiled by its owner. At this point, reduce the boil to a very gentle simmer.

The finished sauce thickens and the vegetables become tender after a 15- to 20-minute simmer. Remember to stir occasionally so the sauce doesn't burn and stick to the bottom of the pan.

FURTHER READING
Favoring Curry: Robert Sietsema of the Village Voice enthuses over the curry available at Hanami in New York City.
This Is Wrong: Yongfook.com warns against using instant boil-in-bag curry sauces. Based on my own experiences with them, it's sage advice.
Yohshoku: Japanese-style Western Cuisine: Foodblogger Maki Itoh on Japanese adaptations of Western food.
Japanese Curry Story: S&B Food Inc.'s page about the history of curry rice in Japan.
House Foods Curry House Restaurant: If you live in the greater Los Angeles or San Diego area, you can visit one of eight House Foods Curry House locations.

And now, the text-only recipe, for your convenience.

Procedure
1. Heat oil in a medium stockpot over medium-high heat. Add onions, and sauté until translucent.

2. Add beef, and cook until browned.

3. Add carrots and potatoes, and pour in as much water as the package instructs, typically 2.5 to 3 cups. Bring to a boil.

4. Break up curry-mix bar and add to boiling pot. Stir as curry chunks dissolve and mixture takes on dark-brown shade. Lower mixture to a simmer and cook, stirring occasionally, until vegetables are tender, 10 to 15 minutes.

5. Meanwhile, prepare the rice. If you have a rice cooker, aces! If not, prepare it on the stove according to package instructions. 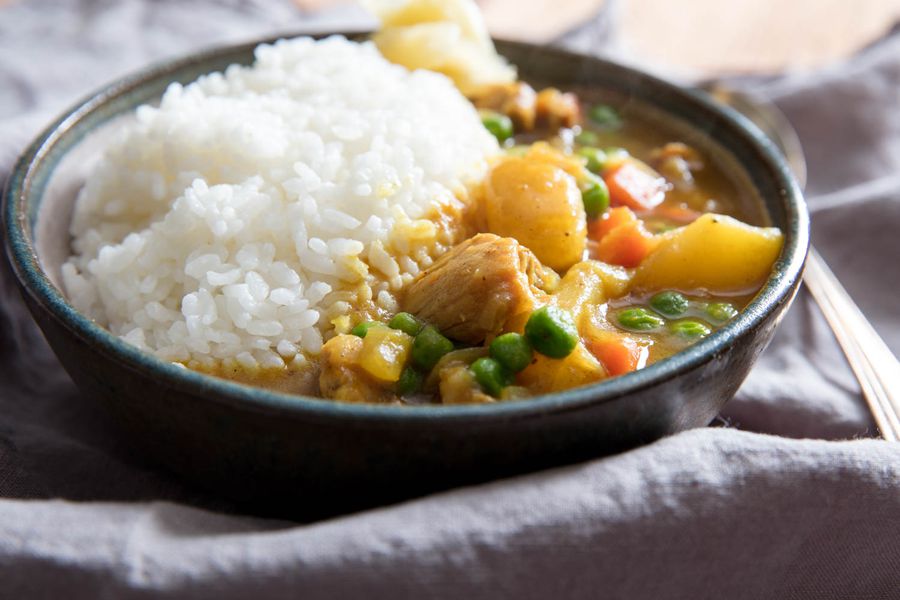 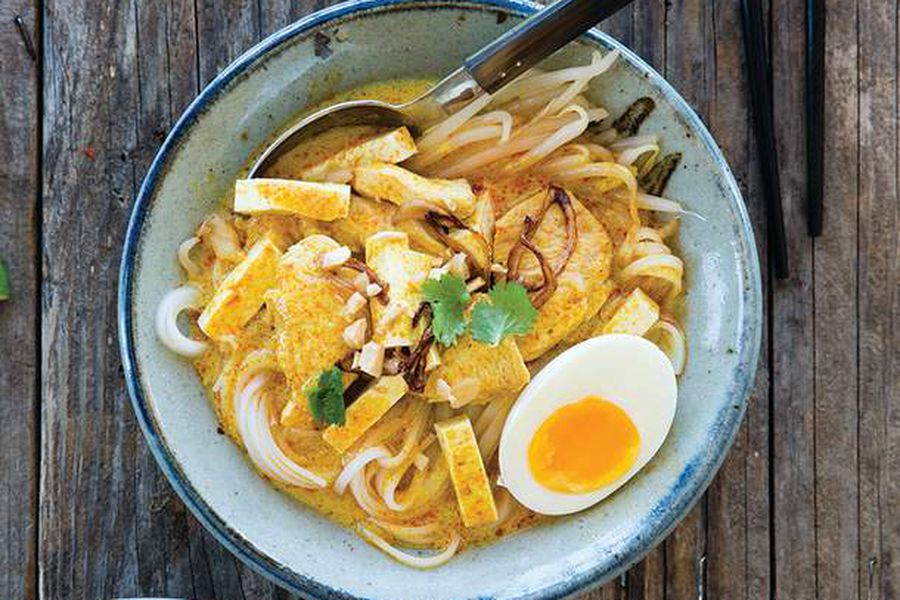 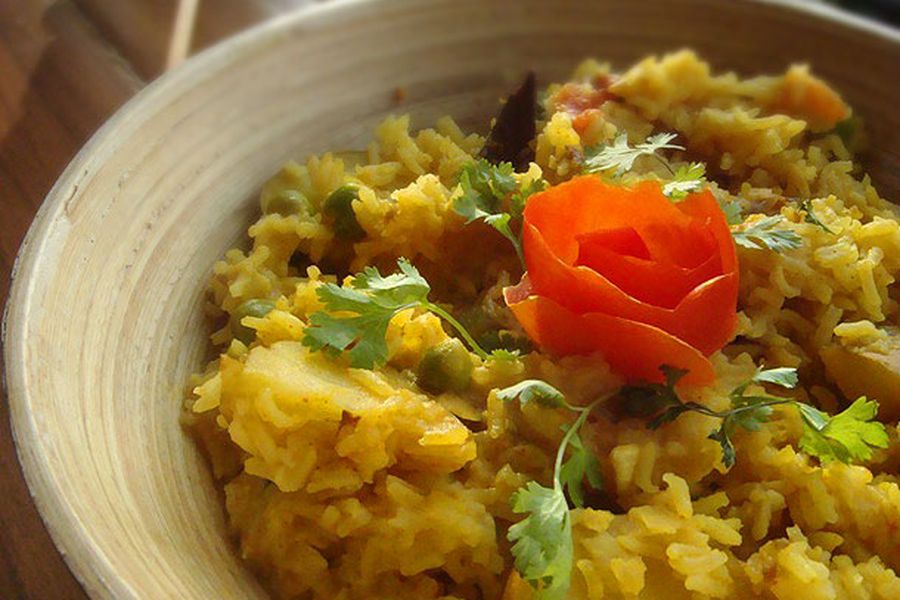 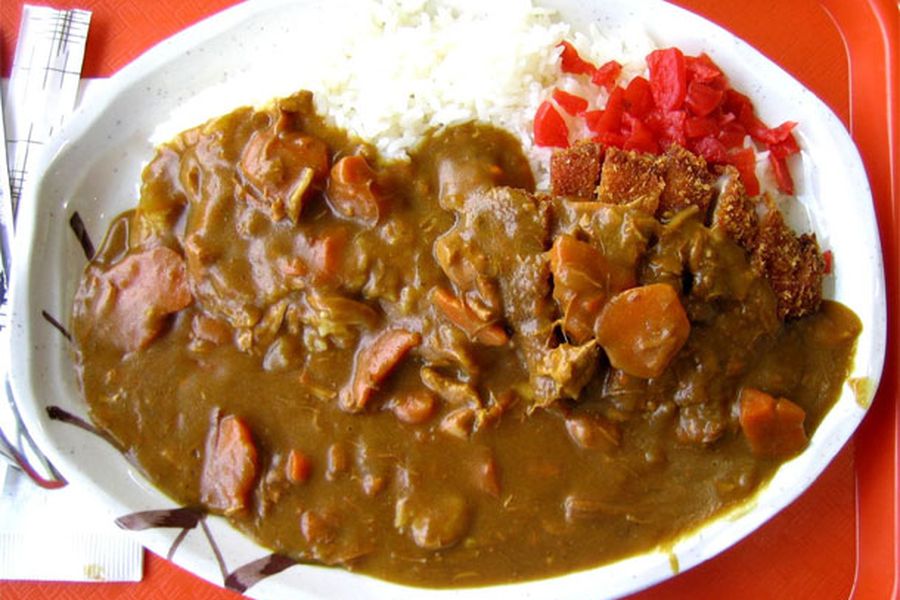 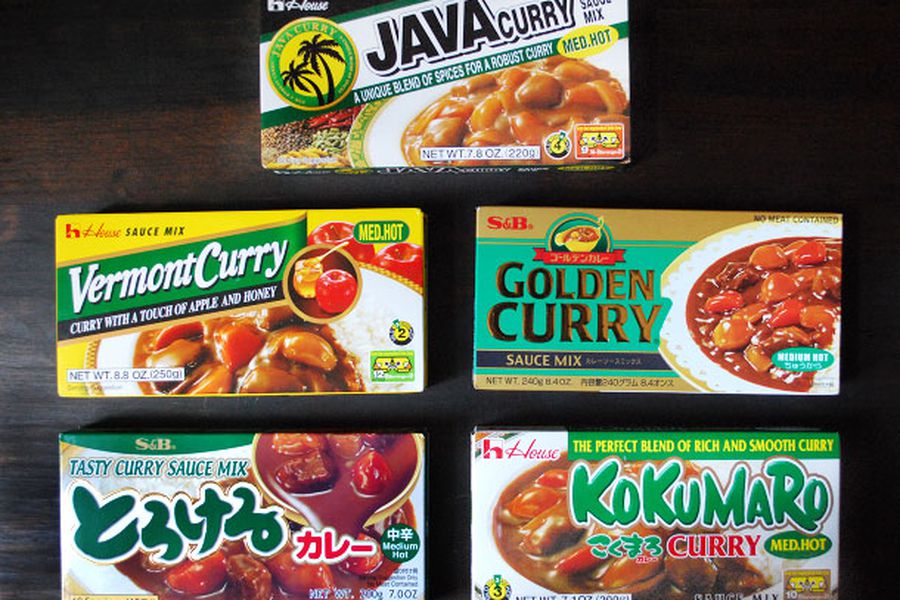 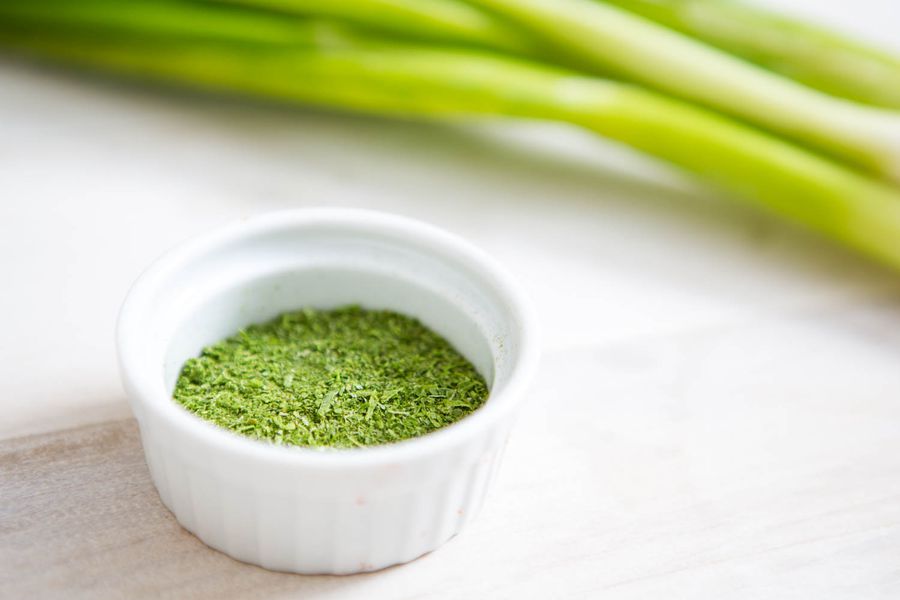 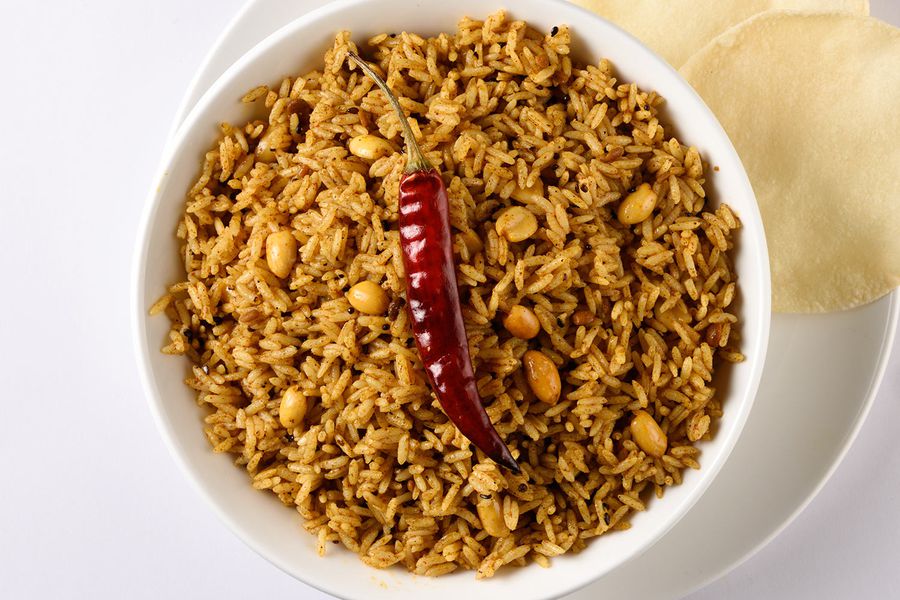 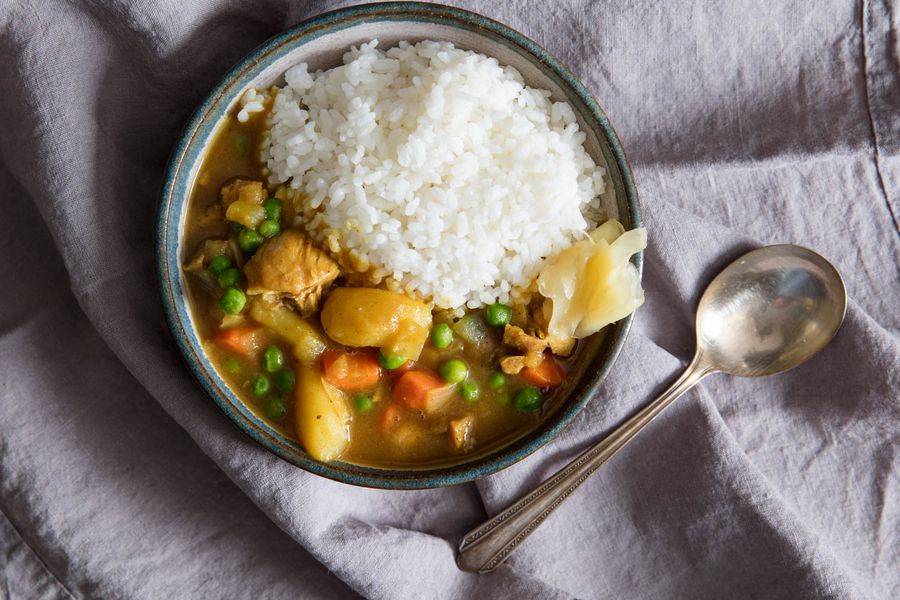 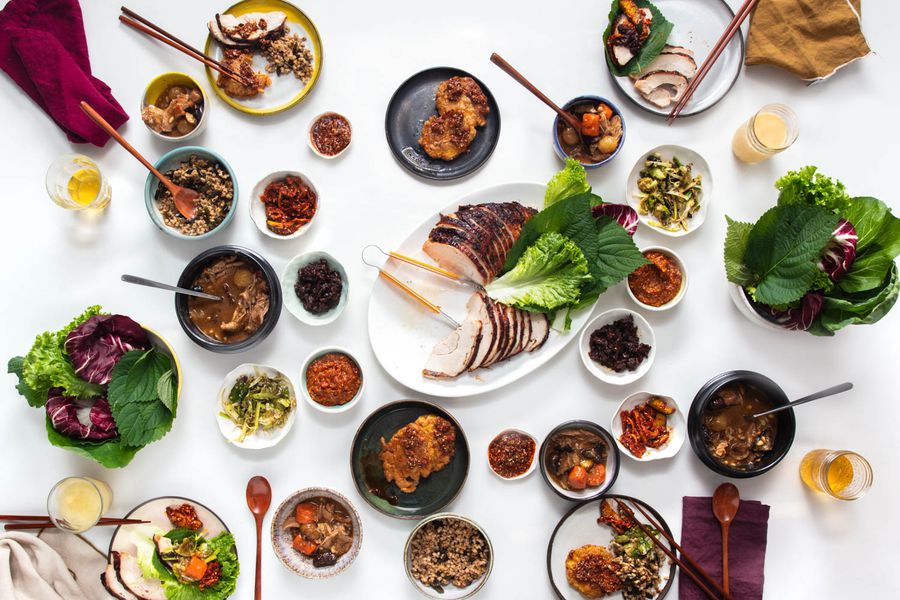 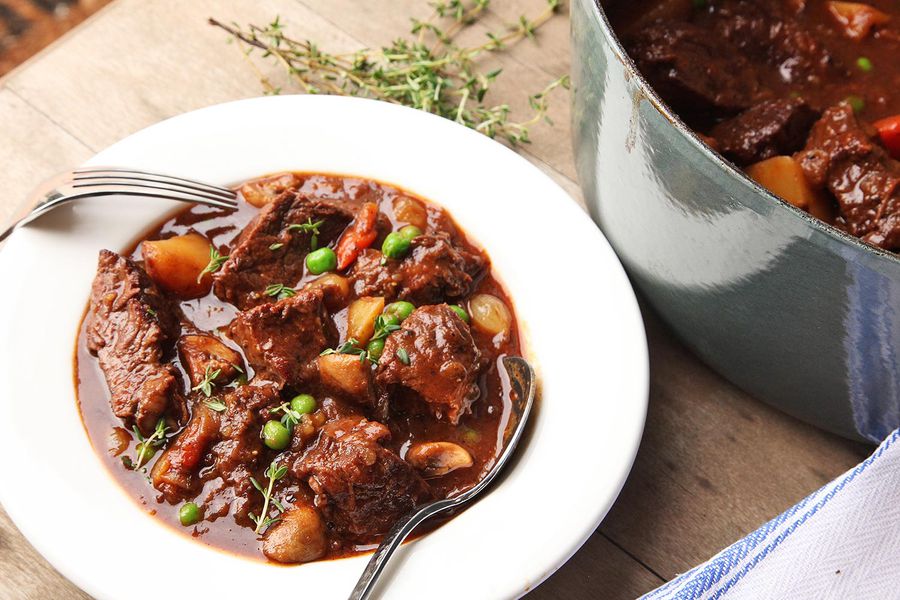 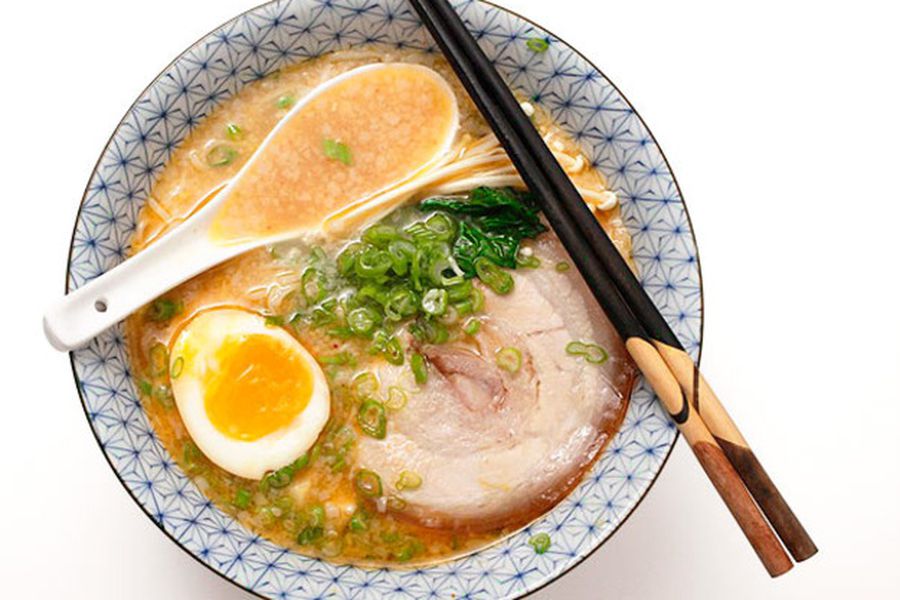 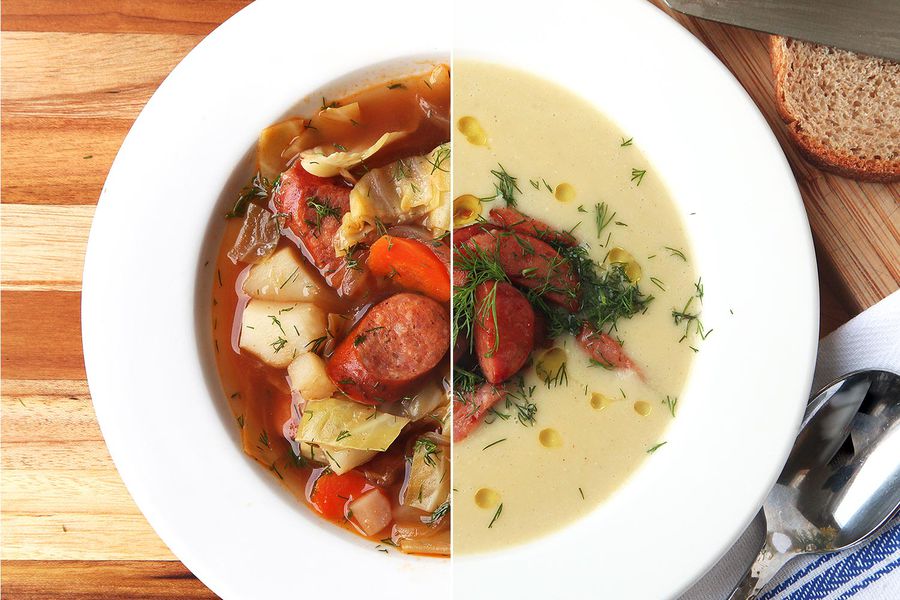 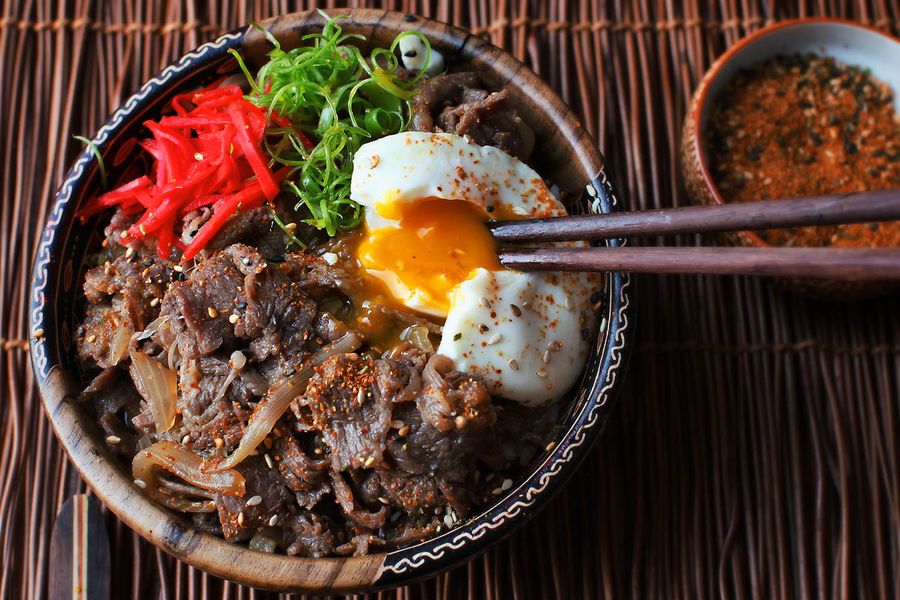