As farmers in Northeast China wrap up the final harvest of the winter pear season, excess pears are frozen so they can be enjoyed throughout the year. Of the fruit that’s harvested, the smaller, harder varieties are a little bitter and sour, qualities that make them less than ideal when eaten raw. But by using a process of freezing, thawing, and refreezing them whole, locals have found a method for extracting exceptional sweetness from the fruit that also produces a tender and juicy texture with minimal effort.

A pear that’s been frozen, thawed, and refrozen at least three times is a fruit with darkened skin and flesh that's perfectly sweet—no longer sour or bitter at all. What starts as a hard, underripe pear yields flesh that has the delicate texture of a canned peach—soft and yielding but still retaining a little bite—all thanks to the tenderizing effect of ice crystals forming and rupturing cells only to defrost and release all those cells' juicy contents.

In Northeast China, the tradition is to let the pear thaw in cold water until a crust of ice forms on the outside. Most people then shatter the layer of ice, bite a small hole into the leathery skin of the fruit, and squeeze and suck out as much of the fruit’s nectar as they can, before finally sinking their teeth into what's left of the pear itself.

While that’s certainly the most visceral and straightforward way of enjoying a frozen pear, this recipe uses the same freezing and thawing technique to mimic a traditional Chinese poached pear dish that's often served as a dessert. In a sense, the freeze-thawing technique "cryo-poaches" the pears, producing a wonderfully soft and juicy texture that's reminiscent of a poached pear while maintaining the uncooked fruit's bright and fresh flavor.

Sweet dessert soups are common in many parts of East Asia and many of them draw on multiple sources of sweetness to build a more complex flavor profile. In this recipe, I do that by creating a light syrup infused with the natural sweetness of goji berries, fragrant sweet osmanthus flowers or mildly buttery chrysanthemum, and rock sugar, all balanced by the bitterness of two types of Chinese almonds.

Like most Chinese desserts, this dish is subtle. It can be served as a refreshing end to a heavier meal or even as an elegant palate cleanser before dessert proper.

Goji berries, Chinese almonds, rock sugar, dried osmanthus, and dried chrysanthemum can all be found at well-stocked Chinese markets. Note that packages of Chinese almonds are often not labeled with enough detail in English to help identify Northern versus Southern almonds, but the two types are almost always sold near each other, and can be distinguished by their size, with Southern almonds being larger than Northern ones. Northern almonds are only consumed cooked, as they contain cyanide and are mildly toxic.

The pears can be stored in a sealed bag or container in the freezer for up to 9 months, during any stage of the freezing and thawing process.

The syrup can be made up to 1 week in advance and refrigerated in an airtight container until ready to use. 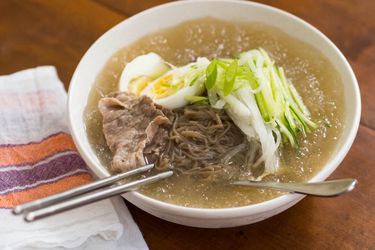 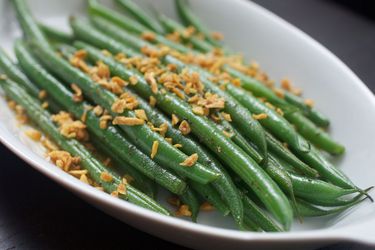