There are only few things in life that can't be made at least a bit better by topping them with a soft cooked egg. Off the top of my head I can only think of three: great novels (traditional paper or electronic), hair cuts, and ice cream sundaes. That's about it.

Things that are definitely in the better-with-an-egg camp: Steak. Pasta. Hash.

It's the latter we care about today. I'm a hash fiend, hard core. It's what I make when all I have is a few odds and ends in the fridge and a couple of eggs. Cut some vegetables up just right, cook them until browned and crisp, crack an egg on top and cook it until just set, and you've got a meal that's easy enough to make for breakfast but satisfying enough for a light dinner.

This version starts out as a traditional potato hash. The secret to super crisp potatoes that are golden on the exterior and creamy in the middle is to par-cook them in water to tenderize and add moisture to gelatinize their starches before frying them in a skillet to crisp up their exterior.

A few minutes before the potatoes are done crisping, I add handfuls of shredded brussels sprouts and kale, along with some sliced onions. It looks like a lot of stuff going into a moderately small pan, but those greens will very quickly wilt and cook down, shedding their moisture and crisping as they do, turning their green flavor into something rich, sweet, and nutty.

If all goes well, and there's no reason to think that it shouldn't, your kale and sprouts should finish cooking down just as your potatoes achieve maximum crispness and your onions start to take on hints of sweetness to balance out the heat and tang of the hot sauce you stir in at the very end.

For the eggs, you can poach them using our foolproof method if you'd like, but it's much easier just to break them directly into wells you form in the hash and finish them off in the oven with just a drizzle of olive oil.

This hash smells so good coming out of the oven that my wife literally clapped her hands when I brought it to the dinner table. That's a pretty good return for about a half hour's worth of work, and an admittedly strange thing for her to do.

The jury is still out on whether she's better with or without a soft cooked egg on top, but I'll make sure to figure it out one night while she's asleep and report back. For science. 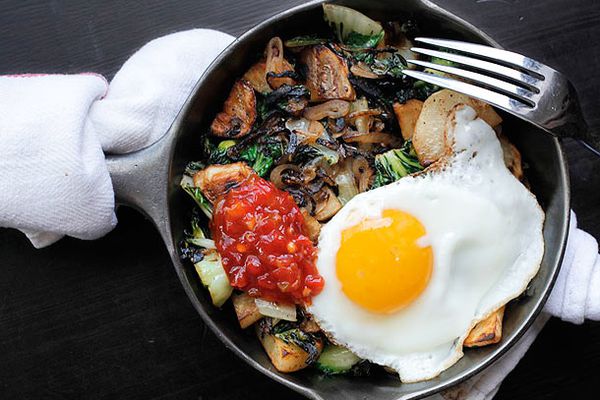