Once you've made duck confit, you're only 20 minutes away from a delicious weeknight dinner.

One of the trickier parts of developing and writing recipes is determining how detailed the instructions in recipe steps need to be. We want to make sure that people can successfully pull off these recipes and techniques at home, so hours upon hours are spent agonizing over the best way to describe things, like the motion of popping the ball joint out of the socket on a duck when breaking down whole birds. (After a long discussion with Sho and a Zapruder film–level analysis of my duck butchery video, I settled on comparing the movement to that of turning a sock inside out.)

While it's vital to provide accurate, descriptive visual cues for recipe steps—as Stella often reminds everyone, visual cues are more important indicators than time ranges, given the great deal of variance in things like the output of a stovetop burner, which can't be completely accounted for when writing a recipe—it's also important to be concise. Overloading recipes with text can make them confusing and difficult to follow.

Over the past few months, I've become interested in a particular wrinkle of this recipe-instruction conundrum—recipes that provide detailed step-by-step instructions for cooking the item in question but end with a yada yada regarding what to do with the finished product, particularly when the recipe in question doesn't produce a stand-alone meal. People generally don't need guidance on how to eat a doughnut, but if they're making homemade XO sauce for the first time, I feel like it's important to provide readers with additional recipes and inspiration for putting a recipe to use that goes beyond "serve over rice."

The yada yada problem is one that crops up frequently with duck confit recipes. The tripping-up point with confit is that even after curing and gently cooking duck legs in fat for hours, they still need to be spruced up a bit before being served. Sure, you could fish a duck leg out of the cold fat it's been stored in and start chowing down, chewing through the soft skin to get to the tender meat beneath it, but that would be a waste, since it's far more delicious to eat after it's skin has been crisped and it's served warm.

The downside to reheating and crisping is that it involves more cooking steps, going beyond those required to make the confit itself. Most recipes skirt this issue by ending with Cliff's Notes for warming the confit, but usually stop short of providing detailed instructions for turning the confit into a composed dish.

For readers who decided to take on my Big Duck Project, I didn't want to leave anyone hanging—that's for the duck crowns—so, along with the recipes for both traditional and koji confit, I developed simple weeknight dinner recipes that put them both to good use.

For the traditional confit, I kept things classic with a bistro-style dish that pairs a whole crisped-up leg of confit with a light, bright, and bitter mixed greens salad. Because it's so rich and meaty, duck confit pairs well with bitter vegetables and benefits from a kick of bright acidity, so a mixture of radicchio, mustard greens, chicory, endive, and frisée, dressed with a simple vinaigrette, is the perfect companion.

Inspired by the garlic fried rice that Sho served alongside his chicken adobo, along with his recent takes on Japanese-style rice bowls, I made the koji duck confit the star in a weeknight rice bowl meal. Along with the whole legs of confit that are crisped up in a skillet, the confit also plays a part in the rice that the duck legs are served over—sliced garlic gets quickly cooked in fat from the confit and then both are folded into a pot of cooked short-grain rice along with umeboshi—salty-sour Japanese fermented plums—fresh cilantro, and toasted sesame seeds.

For both recipes, I use a nonstick skillet to crisp the skin on the confit. Beyond cooking eggs, I don't really use nonstick skillets (you can read more about why you shouldn't either here), but this is something they excel at. The skin on duck confit is incredibly fragile, soft, and prone to tearing, and it's tricky to crisp it while gently reheating the meat. Reheating duck confit in an oven works pretty well, but it doesn't produce the most evenly browned or crisp skin. Attempting to crisp the skin in a stainless steel or cast iron skillet is risky; moving and flipping the duck legs can easily cause the skin to tear, no matter how careful you are or how well you've seasoned your pans.

But a nonstick skillet makes crisping the supple skin of duck confit a breeze. Heat the skillet over medium-low heat, pat the skin on your confit duck legs dry, and arrange them skin-side down in the pan. This is another good time to bust out the Chef's Press weights, using them to press down on the duck legs to keep the skin in even contact with the surface of the skillet. Keep the heat low and steady and, within 10 minutes, you'll be rewarded with golden-brown crispy duck skin and gently warmed confit. Once the skin is crisp, gently flip the duck legs over for a couple minutes to finish heating them through.

As you may recall, the natural sugars from the shio koji will cause the duck skin in the koji confit to brown much more quickly. This isn't a cause for concern, but just keep an eye on things while crisping the skin to make sure it doesn't burn.

Both dishes look and taste like special occasion fare but come together in less than 30 minutes. That's the best thing about taking on some of these bigger cooking projects like duck confit and shio koji—they pay off down the road when you put them to use for quick, easy meals. 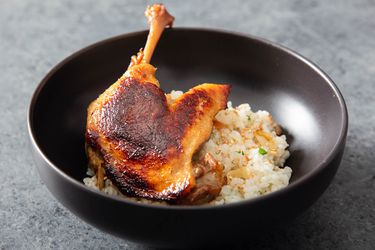 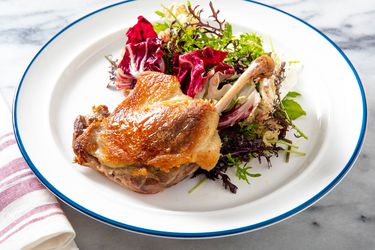 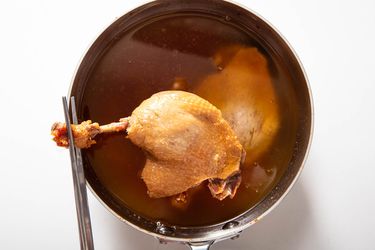 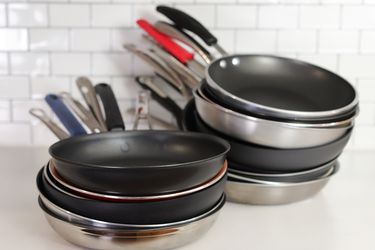