It only took a few months of writing this series, and I think I've found my all-time favorite. I want to make the case that pigs' tails contain everything desirable in the pig, and in exactly the right proportions. Unlike oxtail, the tails of pigs come with the skin intact so that each segment is a perfect cross-section of skin, fat, tendon, and meat.

A Little Porky Universe: The Qualities of a Pig's Tail

Fried or roasted, the skin of the tail is chewy and crisp, with a gelatinous layer underneath. Tail flesh is fork-tender like that of the neck bones, but meatier than trotters. There's a modest amount of tendon around each bony hub--just enough to make the gnawing enjoyable, but not so much as to distract from the whole. All in all, a tail is a little porky universe unto itself.

I first encountered pigs' tails in a class led by New York City chef Ryan Skeen, and was intrigued with the idea of eating the whole tail of a beast. Oxtails, as befitting their owners, are so large as to lose their resemblance to our average conception of the tail. Pigs' tails, on the other hand, have a familiar, endearing quality. Like the curly stems of watermelons or the ringed shapes of pasta, the rosy corkscrew image we hold of the pig's tail resembles that which appears on actual pigs. For my purposes, I sought out tails greater in size, presumably from larger breeds. Like the tails I ate in Skeen's class, the tails I brought home from my Hispanic butcher were wider, longer, and cut into segments for more convenient use.

Initially, the tails were a pleasure to cook. A preliminary deep-frying (carried out so as to quickly brown the meat) was no trouble at all. The oil barely splashed the edges of the pot and within a few minutes, the tails emerged from the oil looking golden and smelling porky. The deep-frying was followed by an hour-long simmer in a pot of water, wine and soy sauce, which produced a full-bodied stock that made for a fine soup broth in the coming days. The preparations were so streamlined, so simple, that I didn't give much thought to the last step in the process—a final deep-frying to re-crisp the skin and brown the meat.

Frying the tails for the second time was an unqualified disaster. In retrospect, I should have considered the braising liquid in which the tails had been stewing—liquid that had rendered the tails succulent, juicy, and full of water. The moment I slipped the tails into the pot, the hot oil bubbled so furiously that projectiles of it shot out from the pot with astonishing range. I hid in the corner of the kitchen for a few minutes, waiting for the frequent explosions to subside. They never did. Like fireworks, the paroxysms erupted with unrelenting force, covering the walls and the floor with pig fat and vegetable oil. The lid of the pot had been propped uselessly to the side and in the dazed panic emerges when things in the kitchen run amuck, I debated whether it was even worth it at that point to cover the vessel.

I steeled myself for the task of retrieving the tails from their fiery cauldron. Grabbing the longest pair of tongs in the kitchen, I inched my way towards the stove. The first two segments came out of the oil with little damage incurred—just a few hot droplets of oil on my hands and forearms. The tails were perfectly golden and crisp and even as I stood on the greasy floor, my panic gave way to hunger. Tail after perfect tail emerged from the pot. Only one segment remained. Perhaps it was my exuberance that all had gone so well, or simply that I had grown tired from the day's exertions, but as I pulled out the last tail from the pot of oil, I squeezed the tongs an iota more forcefully than before. The slight variance in pressure was all that was needed. Suddenly, a spurt of oil shot forth from the pot, hitting me squarely in the face.

I let out a shriek that pierced through the thunderous sputtering of the oil. Tossing the mutinous tail onto the plate, I turned away from the stove and reached for the corner of my right eye. Had the oil made contact with my eyeball, I wondered frantically, or merely skimmed the surface of my eyelid? The pain was too diffuse to pinpoint. Naturally, I jumped to the worse conclusion. I would be blind in one eye, and all because of a pig's tail. Afraid to open my right eye, I stood still for a moment and allowed the regrets of my life to pour forth. I had never taken apart a whole pig. I had breached, but never snorkeled, in the Mediterranean. Despite several attempts, I had never finished James Joyce's Ulysses. And now I would have to fabricate a pig, go snorkeling, and finish that novel, all with the use of just one good eye.

Then, as quickly as the pain came, it subsided. Tentatively, I opened my right eye and gazed upon a perfectly fried platter of tails. Every detail—the crispy skin, the browned meat, and the glistening pockets of fat that peeked through both the skin and meat—was in precise focus to my eyes. I took a bite. The browned meat on the outside gave way to meltingly tender meat within, marbled with generous pockets of fat. The skin, gelatinous and thick, had been rendered crisp from the deep-frying, all the while retaining a slight chew upon each bite. Dressed in a bit of soy sauce and red wine vinegar, the meat was porkier than the porkiest trotter or shoulder. I gnawed on tail after tail, leaving behind skeletal remains intricately linked like cogs on a chain.

Immobilized by all that pork, I decided that a maimed eyelid was not a terribly high price to pay for the utter deliciousness of the tails. As I cleaned the oil from the walls and floor of the kitchen, I added "buying goggles" to the list of things I'd never done before. That way, I'll be covered the next time I fry up pigs' tails. 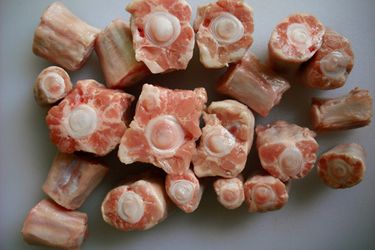