The key to a flavorful, luxurious cream of mushroom soup? "Construct" the cream with mushroom broth and plenty of butter.

In a previous post, I showed you how to make creamy soup out of virtually any vegetable. In that article, I mentioned that my old chef, Jason Bond, showed me how to make a creamy chanterelle mushroom soup. Tasting that soup for the first time was one of the high points of my culinary education. Today, by popular request, I'm going to share with you Chef Bond's creamy chanterelle soup technique.

For the record, this exact same technique will work for virtually any mushroom. Even the mild-mannered button will turn into liquid love when you treat him like this.

And now it's time to play a game called "Have You Met Tim?"

Have you met Tim?

Tim is a chanterelle. That buddy of his lying next to him? That's Tim too. So are the two chanterelles behind the first two Tims and the ones behind them. They're all Tim. In fact, all chanterelles are named Tim. This is because every chanterelle I've ever had has met with a horrible, gruesome fate within hours or days of meeting them. Giving them all the same name keeps me from getting overly attached.*

*It's the same reason all of my goldfish and neon tetras and mollies and other tropical fish are all named Jeff the god of Biscuits. But that's another story.

Today you're going to witness one of those grisly deaths: We're going to turn Tim and his Tim-buddies into Tim-soup.

First things first: He needs a haircut. A mushroom's gotta look his best when he goes up to meet that great big Vita-Prep in the sky.

Some chanterelles are tender and clean enough to cook with very minimal trimming. Others tend to get a little woody at the bottom. To remove that woodiness, hold the chanterelle in one hand and gently scrape its side with the blade of a sharp paring knife. The sides should peel right off easily and stay connected at the very bottom, like a tiny banana.

Trim off the bottom of the chanterelle and those peels should come right off. Just like any other scalp, these ones should be collected. Place them all in a medium pot and cover them with a quart and a half of chicken stock, and bring them to a simmer while you finish prepping. This will give you an intense, mushroom-scented chicken broth to cook with later on.

Here's Tim and all his Tim-buddies, looking and feeling their best, ready to tackle the world, perhaps to chat up that sassy-looking mousseronnette over in the corner. Little do they know how short for this world they really are.

But don't let them in on the little secret yet. First, let 'em know that they look great, but they need a wee bit of a boost in the aroma department if they really want to impress the ladies. Shallots and garlic should do nicely.

As with any vegetable soup, you can use whatever aromatics you like to start your base. Regular onions and leeks are both swell, as is celery. In this case, I like the mild sweetness of shallots and garlic slowly sweated in butter. It boosts that mushroom flavor without overwhelming it, just the slightest hint of cologne to brighten Tim's naturally sweet and musky aroma.

Here's where things start to get a little frightening.

AHHHHOOOHHHHHHNOOOOOEEEEEESSSSS!!! WHHHYYYYYYY??? Scream a few dozen Tims all at once as they realize that they aren't going on a date after all, but rather are being fried in hot butter.

In point of fact, Tim makes no noise at all. He's just a mushroom. He sits there and takes every bit of punishment you have to give him.

As the chanterelles cook, they'll give off liquid, which should pool in the bottom of the pot. The goal here is to drive off and concentrate that liquid without actually giving the mushrooms or alliums any real color. We want clean, sweet, bright flavors here.

The best way to tell when your mushrooms are done sweating is to listen. When there's still liquid left in the pan, it'll make a faint simmering sound, sort of like "fwthpthfwthpthfwthpthfwthpfh."

As the liquid slowly evaporates and you're left with just fat on the bottom of the pan, it'll transition into more of a sizzling sound with the occasional POP or CRACK, like "szzszsK!szsPA!szzsKR!szzszs"

This is how you know that Tim is really, truly dead, and it's time to start covering up the evidence by converting his carcass from what looks like misshapen pieces of soggy orange pasta into something creamy, smooth, and delicious.

We start with a bit of flour.

The flour is not 100% necessary, and the large amount called for in many creamy mushroom soups can indeed overwhelm the flavor of the mushrooms, making it taste more like a mushroom sauce than anything, but a single tablespoon for a quart and a half of soup is enough to help the fat we're going to add later on emulsify properly without tasting stodgy or thick.

Next up, a splash of dry sherry or white wine. You may notice I've deviated again from my standard vegetable soup technique. You all know how important acid is to flavor, right? Sometimes—most of the time—I'll add acid at the very end of cooking, so that I get the brightest possible flavor. In this case, however, adding acid at the end gives this soup too much brightness, when really it's all about being rich and velvety.

So instead, I use wine or sherry, which adds brightness and complexity, but mellows out with some simmering.

Remember those mushroom trimmings we had simmering a while back? Well now's the time to use it.

Set a strainer over the pot and strain the mushroom-scented broth through it. Isn't this extra brutal? We're pouring Tims' decapitated scalps right back over them, only to whisk them back away and dump them in the trash.*

*It's kind of like Hannibal Lecter holding your amputated hand in front of you before tossing it in the trash and muttering in that Anthony Hopkins voice "I would not waste a fine bottle of chianti or fava beans on mere scraps."

So far, so simple. Time to complicate things a bit.

Ok, so not too complicated. All I've added is a couple bay leaves and some thyme sprigs and set the soup to simmer for about half an hour. At this stage, it should smell intoxicatingly delicious. I mean delicious.

Once it's simmered, we're pretty much done. You can discard the bay leaves and thyme and purée the sucker with a hand blender if you'd like, but you'll get much better results out of a real blender. A real blender is also better for the fat emulsification stage that's so essential to giving a vegetable soup some body and mouth-coating richness.

Many cream of mushroom soups call for actual heavy cream or milk. I find that these ingredients, while they can be delicious, end up diluting the flavor of the mushrooms a bit. Rather, I like to just create what Modernist Cuisine calls a "constructed cream." That is, a smooth emulsion of fat and liquid, in this case, using actual butterfat as the fat element, and the mushroom-y broth as the liquid. With the blender running, I slowly add pats of butter, letting them get completely incorporated before adding a new one.

This was always my favorite part when I made this at the restaurant. We worked in bulk so I got to shove my hand into a big ol' bowl of butter and throw it into the blender by the fistful. I don't think I've had a literal fistful of butter since I stopped working at restaurants. This oughta change.

For the ultimate in creaminess, you should press your soup through a fine-mesh strainer to catch any bits of Tim that have escaped un-pulverized by the blender. At this stage, Tim has gone from being Tims, plural, to simply One Great Tim, a homogenous stew that's greater than the sum of its Tims.

At the restaurant, we'd serve this soup with a lobster, almond, and haricots verts salad, and the waiter would take the pitcher of soup and pour it out table-side, all pretty-like. You can do the same if you want (there is something special about watching how soup flows over and around any garnishes in the bowl, giving you a sense of what you're about to taste even before it hits your lips), but rather than those fancy beans and lobster, might I suggest you go mushroom-squared by using more mushrooms as a garnish?

Here I'm simply sautéeing some chanterelle, black trumpet, and maitake mushrooms in olive oil before hitting them with a little bit of butter and some minced shallots and thyme.

The final soup tastes like rich, velvety, liquid mushrooms, which is really precisely what it is, but I have no better way to describe it. It's satisfying, creamy, and delicious. It's a fitting and bittersweet way to close the short, sweet, and blissfully tortured life of Tim.

Tim, I will never forget you. Because there are millions more just like you.

This recipe will work with any mushroom. To trim chanterelles, scrape the sides of the stems with a sharp paring knife, then cut off the very bottom portion of the stem. Reserve trimmings. Split larger mushrooms in halves or quarters. 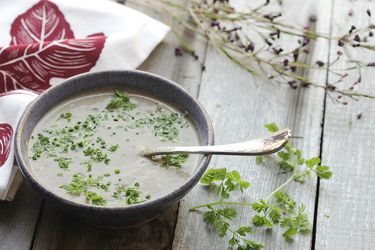 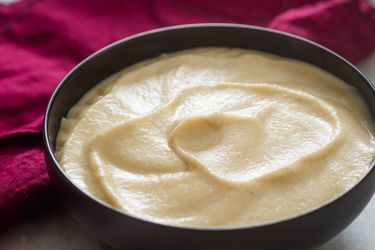 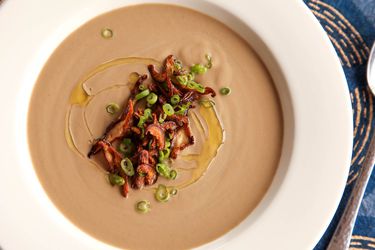