A match made in cream soup heaven.

You know who get along great together? Cauliflower and bacon. That's who. But cauliflower and cream also have a thing going on. Obviously there's only one way this can end, and it ain't pretty.

Scene: Bacon struts into the the diner, his body extra streaky, his skin extra crisp. He walks up to the bar and orders a milk, chocolate. He takes a big swig then walks over to the booth full of brassicas in the corner.

Bacon: Cauliflower, I'm bacon. Bacon McCrisp, and I'm your density. I mean...I am your destiny.

Cream walks into the bar and looks around, angrily.

Cream: Hey McCrisp, I thought I told you to stay away from my brassica. Well, it's gonna cost you.

The two engage in a mighty exchange of fisticuffs, eventually dragging poor cauliflower into the brawl and pummeling each other into a purée so smooth, light, creamy, and delicious that it threatens to cause a rift in the space-time continuum.

At least, that's how it all goes down in my head. In reality, the details are a lot more mundane, but the end result no less delicious.

There's not really much to this soup other than getting three ingredients together that were born to be together. We start by sautéing bacon in a saucepan until crisp, then use that rendered bacon fat to sweat some onions, garlic, and scallions. In goes chicken stock, cream (half-and-half or milk will work if you'd prefer), and cauliflower for a simmer.

As it cooks, the dairy will break. This is not a problem, because once you dump everything into a blender and purée it, it all comes back together.

Bacon goes back in along with some scallions, the soup gets seasoned, and that's about all there is to it. Sometimes simple perfection is just not worth messing with.

I see dinner in your future. 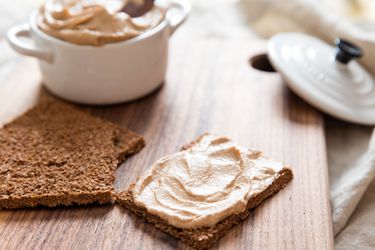