We've developed an easy recipe for choux pastry that takes almost all of the guesswork out of the traditional technique, producing puffs that are golden and crispy on the outside and hollow within. The choux can be made with water or milk or combination of the two, and while either option works for these cream puffs, we prefer water. Milk produces puffs that brown faster, thanks to the milk's proteins and sugars, which can be especially helpful when baking smaller choux puffs that need to brown sufficiently in a shorter amount of time. But for larger puffs like these, water allows for a longer baking time without the risk of over-browning, ensuring that the puffs cook up airy and hollow with a crisp golden exterior.

Because this recipe is sweet, we also recommend adding the optional sugar listed in our classic choux recipe, to produce a slightly sweeter puff that pairs well with the dessert filling.

When piping the choux, aim for a two-inch wide base per puff (you can draw circles on your parchment if that helps; see instructions for that in the note below). Once they’re all piped, lightly dust them with powdered sugar. Doing so increases color development, reduces the chance of cracks and splits, and lends crunch and sweetness to the baked puffs.

How to Fill Cream Puffs

There are two ways to fill cream puffs: a “piped-in” option and a “sandwich” option.

We generally prefer the piped technique for its greater ease and consistency. It involves making a small hole in the bottom of each puff and then piping pastry cream inside. This method evenly distributes cream within the puff and keeps it locked inside, similar to a cream-filled doughnut, making it far less messy to eat. As written, our choux and pastry cream recipes are scaled to each other such that one batch of one of our pastry creams (your choice of vanilla, chocolate, or lemon) should be just enough to fill one batch of our choux pastry.

The sandwiched version makes for a more dramatic presentation, but it's also messier to eat, given the propensity for the filling to squish out the sides when you bite down. We begin by carefully slicing each puff in half with a serrated knife, then piping the filling onto the bottom half before closing the "sandwich" with the top half of the puff.

It's worth noting that the sandwiched rendition also requires twice as much filling than the piped method in order to look nice and full. To get the right volume, you can use a double batch of one of the pastry creams, a large batch of whipped cream, or a single recipe of crème légère (a batch of pastry cream that's lightened with whipped cream).

You can enjoy the cream puffs as-is or finish them with a sprinkle of powdered sugar or even a drizzle of chocolate sauce. Whichever option you choose, you’ll be thrilled with the results—decadent cream-filled puffs that will satisfy anyone with a sweet tooth.

If you want to make sure that each puff is the right size, you can prepare a template ahead of time. Take one sheet of parchment paper and, using a 2-inch round cutter as a guide, trace 9 circles that are 3 inches apart. Flip paper upside down and set it on the baking sheet. Repeat with a second piece of parchment paper.

If you're making sandwich-style puffs, you'll need a greater volume of filling than this recipe provides. There are several ways to arrive at the right amount:

Filled cream puffs are best consumed on the day they’re made.

To store unfilled cream puffs, wrap them tightly in plastic and place in an airtight container; they can be kept frozen for up to 1 month. To refresh puffs, preheat oven to 350°F (177°C). Transfer frozen puffs to a sheet tray and reheat until crisp, about 5 minutes. Let cool at room temperature before filling. 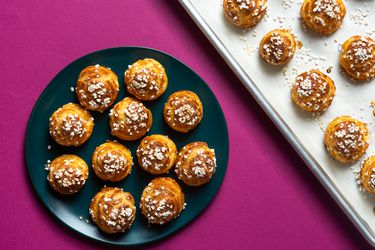 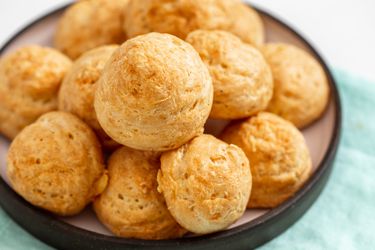 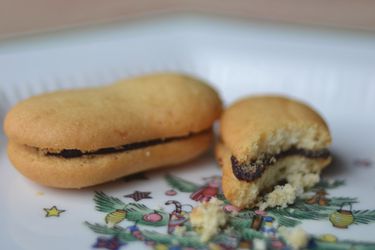