Crisp and bubbly with a molten center of oozy, tangy cream cheese, scallions and crab.

I asked the folks over on my Facebook Page what their favorite Chinese restaurant appetizer is. I was expecting dumplings, spring rolls, perhaps hot and sour soup. What I got instead was a deluge of crab rangoon, with more than twice as many votes as any other dish.

The people have spoken, so I shall deliver.

Crisp, bubbly wonton wrappers with a molten center of oozy, tangy cream cheese lightly scented with scallions and a vague hint of crab. Who can argue with that?

This, of course, raises the question: Do you even need to use crab in there? And what about real crab versus krab, a.k.a surimi the red-dyed sticks of ground and formed fish that resemble crab-flavored string cheese? I fried up a few batches, one made with real crab, one made with fake krab, and one with no crab at all to gauge the difference.

Certainly, no crab was not the way to go. I mean, they were tasty and all, but it turns out that crab, even artificial crab, adds an essential flavor to the crispy puffs. A little salty, and a little briny. As far as real vs. fake, it's a toss-up. The real crab had a much more distinctly "fishy" flavor which might turn some people off. The krab was a lot less assertive: One of my party guests is a hardcore no-fish eater, but even he didn't mind the flavor of the fake stuff.

The only other question is shape. Simple folded triangles are the easiest to form, but they have a tendency to puff up like a balloon and blow out as they fry, spewing hot crab into the oil and causing it to bubble, pop, and probably burn your arms (or worse, if you, like me, enjoy frying topless). You can also fold and twist them into little tortellini or bunch them up into little purses. But the king of shapes, the crab rangoon ne plus ultra, is the four-pointed star. Not only does it bunch up all the filling into an easily burst-able sphere, it also maximizes surface area on the skin, giving you more crunch per wonton.

For the Sweet & Sour Dipping Sauce

For the Crab Rangoon

Crab rangoons can be frozen after step 2. Space them out on a rimmed baking sheet and place in the freezer until completely frozen, then transfer to a zipper-lock bag. They'll keep for up to three months. The two teaspoons of chile flakes in this sauce will make it moderately spicy. You can adjust the heat level to your taste (or omit it entirely). 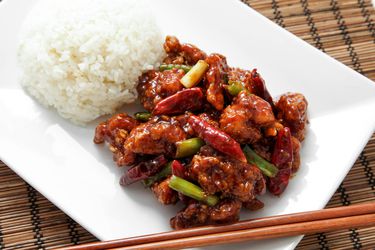