Is the advice to not sauté and fry with olive oil over high heat true? We look at the science.

"I have been told it's not safe to fry and sear with olive oil. Is that true?"

Most of the time when I cook with high heat, such as searing meats or deep frying, I reach for neutral oils like canola or vegetable oil. I mostly do this out of habit, but if I were to give a reason, it'd be both because their neutral taste means they won't contribute unwanted flavors to the dish, and because they tend to be inexpensive.

But recently I wrote a recipe for pan-seared steaks with a garlicky olive oil-and-butter sauce, and, since I was already calling for two fats—olive oil and butter—I decided to streamline things by searing the steaks in olive oil instead of requiring a third, neutral oil for that step. One recipe with three fats just seemed a little fussy for something that was supposed to be an easy weeknight dinner.

But then a commenter asked if I'd violated a basic oil rule: "Isn't EVOO not recommended for high temperature frying?"

This idea that it's not a good idea to cook over high heat with olive oil is fairly common. For a lot of people, the concern is one of health, specifically that olive oil, with its relatively low smoke point of 325 to 375°F (165 to 190°C), degrades more than other oils when exposed to high heat. For others, it's one of taste: Do you want the flavor of olive oil getting into whatever you cook, and is there a risk that the flavor will be bad if the oil has reached its smoke point?

I decided it was time to investigate.

We don't normally address health questions here at Serious Eats: We know a lot about food, but we don't pretend to be nutritionists or health experts. And honestly, the way medical advice can change from one year to the next, it's often just as well for us not to get involved.

Because the health aspects of cooking with olive oil are such an integral part of this question, though, I'm going to wade in just a little bit. Up to my ankles anyway (definitely not up to my olives). After spending hours scouring the internet for studies that could help provide an answer, here's what I discovered: My head hurts.

My head hurts because there's a lot of conflicting information out there and it's very hard to reduce it into a simple, direct answer. Still, based on my reading, things are looking favorable for olive oil. For starters, I couldn't find a single scientific study clearly supporting the idea that exposing olive oil to high heat has worse health consequences than other oils used for high-heat cooking. I found a lot of websites making that claim, but none of the ones I saw back it up with evidence. Instead, they assume that a lower smoke point by definition means more toxins, and then sling around buzzwords like "free radicals" to scare us off from using EVOO for cooking.

I did find one study that compared emissions of potentially toxic volatile compounds of several oils at several temperatures, and it indicated that those compounds do increase significantly when an oil has reached its smoke point. That doesn't bode well for olive oil, since its smoke point is relatively low.

But of all the studies I found that specifically compared the heating of olive oil to other oils, the overall message was that olive oil performs decently well under high-heat conditions. There's this one from 2014 and published in the American Chemical Society's Journal of Agricultural and Food Chemistry, which found that olive oil is more stable than certain seed oils for frying at temperatures between 320 and 374°F. There was this one from 2004, also in the Journal of Agricultural and Food Chemistry that showed that olive oil—both extra-virgin and refined—produced fumes with fewer (apparently undesirable) volatile aldehydes than canola oil. Then in 2012, the journal Food Chemistry published this study, which found that olive oil held up much better and was much safer than sunflower oil after prolonged exposure to high heat. A lot of these studies looked at both extra-virgin olive oil and regular olive oil, and both performed well.

On and on, most scientific studies I read gave olive oil high marks for its ability to retain its nutritional properties and resist deterioration despite high heat. Apparently it's even good for the postprandial insulin response of obese, insulin-resistant women. Who knew?

Granted, none of these studies are massive, comprehensive looks at every conceivable aspect of this topic. There may well be a reason why heating olive oil is worse than other oils, but if there is, I didn't find clear evidence for it.

If you want to take a deeper dive, start by looking at these three overviews of what is and isn't known about olive oil and high heat.

As for me, I'm satisfied that at the moment there's not much to indicate I should be any more worried about heating olive oil than any other oil out there.

Given that it's now spring, I thought I'd whip up a deep-fried dish that celebrates the season: carciofi alla giudia ("Jewish-style" artichokes), a recipe that comes from the ancient Roman-Jewish community.

Traditionally, this dish is made by frying globe artichokes in olive oil; the artichokes are trimmed almost down to the heart, but some tender leaves are left attached to help create a flower-like appearance in the finished dish. Here, I used baby artichokes, and fried them in both canola oil and extra-virgin olive oil.

The frying in this recipe is a two-step process, first at a lower temperature, around 300°F or so, until the hearts are tender, and then at 350°F, right up in olive-oil smoke-point territory, to crisp and brown them.

Tasted side-by-side, the Serious Eats crew all agreed that the olive oil contributed a distinct flavor, whereas the canola oil-fried chokes tasted lighter. Preference mostly fell towards the olive oil ones, which makes some sense given the Mediterranean personality the dish is meant to have, but we all appreciated how clearly we could taste the artichokes in the canola batch.

The bottom line is deep-frying in olive oil adds flavor, which is desirable in some circumstances but also can obscure the pure flavor of the food being fried. Whether you deep fry in olive oil will depend on whether you want that flavor or not.

So far we've seen that deep frying in olive oil changes the flavor of the food—a not entirely surprising finding. But what about searing meats in olive oil? Will that have an impact on the final flavor of the dish?

My first foray into this question was with skirt steaks, which I seared until browned in two pans, one with extra-virgin olive oil, the other with canola oil. Both oils reached their smoke point during the searing process.

Once the steaks were done, I took them out of the skillets and made identical pan sauces in each one, in this case a rich pan sauce with sautéed mushrooms, shallots, garlic, white wine, chicken stock, and heavy cream.

Tasting them side by side, my colleagues and I were unable to detect any flavor difference between the olive oil and canola oil samples, which indicates that in the case of richly flavored foods, a couple tablespoons of olive oil for searing isn't enough to significantly alter the taste of the dish.

What about a more delicate pan sauce, though? Would the olive oil make a difference there?

To find out, I cooked up some pork chops, once again in two skillets, one with EVOO, the other with canola oil (both oils once again hit their smoke points).

Once they were good and browned, I set the chops aside and made two identical pan sauces in each skillet, this time with leeks, white wine, a little chicken stock, garlic, and lemon zest.

This time there was a very subtle difference between the two dishes, with the olive oil one tasting ever so slightly more rounded and less acidic than the canola oil one, but I can't stress enough how minor the difference was. If I had eaten them even five minutes apart, I would have said they were exactly the same; only a direct side-by-side comparison made it possible to detect the difference.

In fact, the difference was so subtle, I can't conclude with certainty that the oil was the reason for it. It could have just as easily been due to slightly different rates of reduction or other variations that are difficult to control with total precision when making something like a pan sauce.

In short, searing in olive oil can possibly have an impact on more delicate dishes, but it's unlikely to be a major one, and in many cases may have no impact at all. For dishes like this, if olive oil is all you have, I wouldn't worry about it too much.

Based on my research, cooking with olive oil using high heat isn't nearly as problematic as most of us imagine. On the health side, I was unable to find credible evidence that cooking olive oil with high heat being bad for health (and, in fact, it might be one of the more stable oils for high heat cooking).

And on the taste side, its impact is minimal to none when used to sear foods that are then served with other ingredients, like a sauce. For deep frying it does make a difference in taste, so you just have to follow your preference.

Both Kenji and I have found that you can taste olive oil when using it to sweat vegetables for simple dishes like vegetable soup, but in that instance there's no high heat involved (certainly the oil never gets close to its smoke point), so once again, like deep frying, it's just a question of whether you want to taste the olive oil or not.

Of course olive oil is also more expensive than a lot of other oils, so that's a reason not to turn to it as often for these kinds of cooking tasks. Interestingly, as Harold McGee found in his own taste tests, the flavor differences between high-quality and lesser oils are erased with heating, so when cooking it makes sense to reach for a cheaper bottle, at least as far as flavor is concerned.

The bottom line, though, is that if all you have on hand is olive oil, or if you want to cook with it for flavor, I see no reason to avoid it. 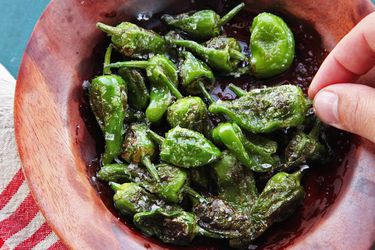 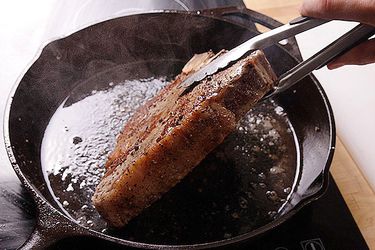