At the Food Lab, we have already taken an in-depth look at New England-style lobster rolls. The cold, mayo-based lobster salad variety, that is. For most people, that's what a lobster roll is and always will be.

Frankly, I like them both ways. We've already done a lot of the legwork necessary for perfect lobster rolls in the New England–style recipe, so this time, all we've gotta do is tweak the recipe a bit.

Now, don't get me wrong. The prose in his piece is stunningly beautiful and his passion is very clear. But what bothers me about David Foster Wallace's piece is the lack of reason. He certainly seems to have done plenty of research on the subject, yet the only defense he offers for his thesis is in the above paragraph: a gut-wrenching anthropomorphism. And to equate lobsters to humans, to project our emotions and reasoning capabilities onto a large crustacean is a fallacy; a fabrication, based not on reality, but on ignorance, delusion, or deception.

"...what bothers me about David Foster Wallace's piece is the lack of reason."

"...a lobster behaves nothing at all like a human being lowered into boiling water"

Fact is, a lobster does not know what a pot is. It does not know what a lid is. It does not connect the fact that by pushing a lid off it may be able to crawl out to safety. It does not have the mental ability or the physical dexterity to "hook its claws over the kettle's rim." In other words, a lobster behaves nothing at all like a human being lowered into boiling water. Rather, it acts very much like a cockroach being dropped into a pot of boiling water: It behaves like a bunch of overstimulated bundles of nerves rapidly firing and causing muscles to spasm in an unpredictable and wild manner.

Nope. It's admirable that DFW doesn't suggest (as some do) that lobsters scream when they are being boiled or steamed. Lobsters have no vocal cords and therefore cannot scream. Whatever noise one might be hearing (I've personally never heard this noise) must be coming either from the scraping of chitin against metal, or perhaps the sound of gases escaping from cracks in the carapace.

Physiologically speaking, a lobster is far more similar to insects than to mammals. Personally, I'd sooner kill an insect-like lobster—whose succulent flesh I'm about to enjoy—than swat a mosquito or squash a cockroach just because they have annoyed me. And I have no compunction with swatting and squashing those annoying bugs.

All of us, whether we are meat eaters, vegetarians, or vegans, understand that not all animals are the same. We don't treat dogs the way we treat other humans. We don't treat lobsters the way we treat our dogs. There is a hierarchy in terms of the level and quality of interaction we can have with our fellow creatures on this earth, and my ability to eat or empathize with them is directly related to this hierarchy.

Back to the Rolls

In our efforts to perfect New England-style lobster rolls, we determined that the best way to cook a lobster for a roll is to very briefly steam it, just long enough to tighten up the exterior of its flesh so that it won't stick to the shell. Then roast it in the oven to prevent it from taking on too much water during boiling. With hot buttered lobster rolls, we've no need to roast the lobster—we can simply finish them directly in the butter we're going to serve them with.

If you want to get fancy, you can kill your lobsters, cut them up, shell them, then cook them sous vide. You'll never have more tender lobster in your life. It turns buttery sweet with an almost braised texture to it.

Personally, I feel that for such a humble dish, it's a bit of overkill. If you're careful enough, you can get away with simply sautéing the lobster pieces in a skillet with butter over relatively low heat. As long as the butter never starts sizzling and you make sure to take the lobster off the heat just as it's done cooking, you're all set.

Added bonus: The lobster juices and melted butter will emulsify into a sweet sauce to pour over the rolls after you stuff'em.

While my cold lobster rolls get nothing but some diced celery, I really like the flavor of a bit of sliced scallion in hot lobster rolls. I add it to the sautéing lobster meat just before it finishes cooking.

I prefer using smaller 1- to 1 1/2-pound lobsters rather than larger ones. Lobster carapaces can be discarded or frozen and saved to make stock.

If you don't have the stomach to knife your lobsters to death, you can boil them whole in step 2. 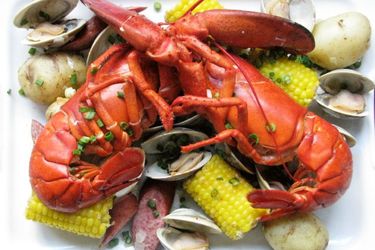