A bowl of this creamy, gingery rice porridge is the culinary equivalent of a warm hug.

Before I moved to Singapore, I had never eaten a bowl of congee, or rice porridge. The name "congee" sounded so foreign to me and it looked unappealingly goopy (even though I eat my fair share of goopy oatmeal and—eek!—Cream of Wheat). Whenever I ate at Asian restaurants in the States, even if congee was on the menu, it was never something my friends and I thought about ordering. I had never tried it until I moved here.

Which was a shame, because it was love at first slurp.

You can't get away from congee in Singapore, as it's sold in almost every hawker center. This soupy savory porridge is made from rice that's been simmered until it's completely broken down, soft, and creamy (a slight amount of texture remains). Though I feel it's mostly associated with Chinese culture here in Singapore, congee is cooked throughout all of Asia. Served plain, rice porridge is mild, a nice contrast to the intense flavors of many of the dishes here. Common "add-ins" include sliced pork, century egg, sliced fish, hot chiles, and even frog (I haven't gotten the nerve to try frog yet). Folks wolf down big bowls of it for breakfast, all through the day, and into the night.

I'm particularly fond of the porridge at my local hawker center, Maxwell Food Center, which just so happens to stay open almost 24 hours a day. Greasy french fries after a night of imbibing? Not here. How about a bowl of pork congee with crispy and oily shallots, chiles, and maybe a raw egg popped into the bottom of the bowl to let cook (slightly) under the heat of the steamy porridge?

Congee is traditionally made with broken rice (rice that's unfit for steaming because the sticky starches will leach out), but you can make it with whole rice if you cook it long enough and mash it while it cooks. You could also make it from cooked rice, which makes it a great meal out of leftover rice. For my recipe, I started with whole rice and a mix of chicken broth and water. I also added a piece of ginger to the pot to help flavor it. Once cooked, I added my favorite "add-ins": pork, crispy fried shallots, green onions, and white pepper (a must in my book). So if you find congee on the menu, try it! Or better yet, add it to your repertoire of wonderful Asian meals to cook.

You can also start with cooked rice, adding chicken broth and adjusting the amount of liquid to achieve the desired consistency. Make sure to stir while rice is cooking so it doesn't burn on bottom of pot. When the rice has swelled, I mash it a bit to help it break down. 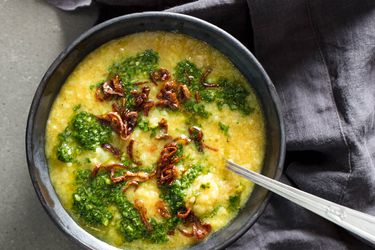 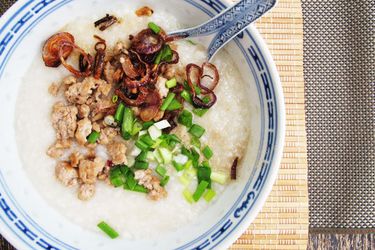 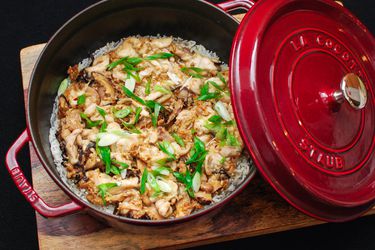 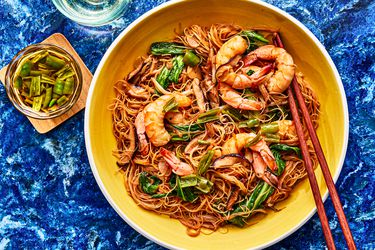