I came to know of Asian greens stir-fried with tofu by way of Tang, one of my closest friends in college. Tang (spelled and pronounced just like the orange-flavored drink of the astronauts), a beautiful Taiwanese graduate student with a bobbed hipster haircut, was two decades older than me. Through our friendship I got my first crash course in Chinese cooking. In her shabby, one-room San Francisco apartment, she cooked using nothing more than a beat-up aluminum saucepan, a single-burner hot plate, and a knife and cutting board.

Tang made the dish with choy sum greens (a cousin to bok choy), always selecting the youngest, most tender greens, which turned buttery and soft when cooked. In combination with the seared tofu, the dish—eaten right out of the pan—wasn't a food of poverty, but of the sublime. My whole being responded to its flavor; each mouthful transported me from that unremarkable San Francisco apartment to a realm of ancient foodways and pure nourishment. Those meals with Tang cemented Asian greens and tofu as a permanent part of my food vernacular, but I didn't realize how important the dish was to me until decades later.

In 2003, I was living in Kuala Lumpur, Malaysia, working on my first book, Cradle of Flavor. I was renting a room the size of a pickup truck in a very weird and very strict Muslim-run hotel. Though in some ways I relished the months I spent there, it was also intensely isolating. I was holed up alone with my work, which I both loved and loathed. The hotel was right next to a mosque where the call to prayer was long and loud, and posted seemingly every other foot were signs pointing towards kiblat—the direction of Mecca, where worshippers would face when praying. My lousy Dell laptop computer broke down every couple of days (once it even got invaded by ants), necessitating frantic trips to an out-of-the-way repair shop. I felt lonely and out of place, like a third wheel in a relationship that I didn't fully understand.

But in an alley behind the hotel, there was a cluster of scrappy street food stalls that served the day workers in the neighborhood. There was an Indian vendor, a noodle soup vendor, someone offering Malay curries, but best of all there was a Chinese cook who would make stir fries to order. I made it a nightly habit to walk to his stall. I'd sit on the same squat plastic stool under an ad-hoc tent of industrial-grade blue tarp. The cook's name was unknown to me (his English, and my Cantonese, were virtually nonexistent). Still, we struck up a rudimentary relationship. I would walk in. He would say, "The usual?" I would say, "Yes."

"The usual" was the Tang dish: whatever greens he had on hand, stir-fried with sliced garlic, salt, fresh and firm tofu, and the faintest smidgen of vegetable oil, all of it plopped very unceremoniously on a faded oval melamine plate that probably should have been tossed years ago. It was extraordinary. The tofu and greens had a beautiful, glistening quality, alive with what the Chinese call wok hei, the breath of the wok.

Every single night for months, without fail and without variation, I ate the same thing and it was never once boring. It always provided for me an intense sensation of comfort and wellness; it was food as psychic safety net. There, in this overwhelming place where I felt overwhelmingly friendless and at sea, that dish was the centerpiece of my day, nourishing me, fueling me, and grounding me.

There's something in my core that finds the greatest comfort in the most basic dishes—foods of scarcity, not plenty: plain scrambled eggs, boiled rice, stewed beans. Maybe it was because my early childhood was so emotionally and financially volatile, with a father who would disappear without reason for weeks at a time, leaving bills unpaid and my mom and me wondering when he would return and how we would eat. Or maybe it's something in me that goes deeper than that.

Whatever the reason, that stir-fry dish Tang made for me so many years ago remains my platonic ideal of comfort food. I order it anytime I'm in any Chinese restaurant, from a Michelin-starred establishment in Hong Kong, to the humblest hole-in-the-wall eatery around the corner of my office in New York City. It never hits the exact notes that that street-food-stall cook in Kuala Lumpur nailed all those years ago, but it always comes close enough. There's nothing that comforts me—or gives me the courage to face whatever might be coming next—more. 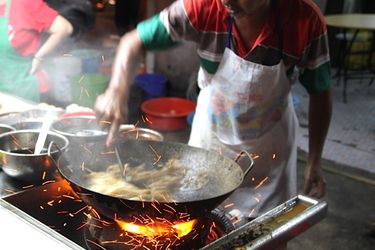