Amy Thielen is the James Beard Award-winning author of The New Midwestern Table (2013) and Give a Girl a Knife: A Memoir (2017). She was the host of the James Beard-nominated Heartland Table on Food Network.

In the frozen north of my rural Minnesota childhood, crab sticks were like body doubles for real seafood. Growing up about as far inland as one can be, all we knew was frozen seafood: Frozen shrimp was a treat, lobster a splurge, and salmon a rarity. But crab sticks—processed white fish puréed into a cylindrical shape and tinted salmon-pink to resemble snow crab legs—were as common as canned tomatoes. Both grocery stores in town stocked the stiff, pink crab planks, although if you were lucky enough to welcome the Schwan's man and his freezer truck of rock-hard treats—everything from gallons of Butter Brickle ice cream to frozen seafood—your crab sticks arrived by home delivery.

How I managed to dodge them throughout my early years is a bit of a puzzler. We never ate them. My mom didn't care much for processed frozen food, and her taste was the crazy quilt under which I slept. She thought lamb was gamey; so did I. She liked her chili made with pork and spotted with orange fat on top and ladled over canned tamales; I did, too. Born and raised in rural Minnesota, she had an intimate relationship with canned and processed food, but when it came to seafood, the woman had standards. In the summer, she fried up the bluegills we caught off the end of the dock for breakfast. In the winter, she simmered frozen lobster tails until clouds of their crustaceous sweat fogged up our windowsl she served them with candlelit drawn butter. My preferences matched hers stitch for stitch.

So it wasn't until I was 21 years old, freshly graduated from college and working as a short-order cook at the Schwarzwald Inn on Main Street in my hometown that I tried my first crab stick. That first day, Jorg, the owner, showed me how to make a chef's salad. "Don't cook up anything new," he said, ransacking the yellow cutting board for leftover bits and scraps from the last rush, "except for the crab."

He chopped up the end of a cooked chicken breast, a crisped tong-ful of conjoined bacon slices, the ham leftover from the previous order's Denver omelettes. He grabbed a whole frosty tomato from the refrigerator, quartered it, splayed its points, and then pivoted into the back of the upright freezer and grabbed two "Sea Legs"—they were wrapped individually in plastic, like tampons—and popped them into the microwave. He hit the number pad blindly until it whirred to life. The sticks rotated slowly on the glowing plastic stage.

"When they start to smell, they're thawed," he said, pushing a stone-gray hard-boiled egg yolk through a small oval wire cutter with one hand, and catapulting the microwave door open with the other. I made a mental note that their sugary funk began to seep out the door about thirty seconds in (I wanted to nail this job). As Jorg unrolled the pink, steaming logs and arranged them on top of the salad—which was now as large and colorful as a layer cake—I couldn't help think that those sea legs looked as fake and cheery as frosting. When I nibbled the end he left on the board, it tasted like shrimpy cream cheese, and sure smelled better than the overcooked egg. Unlike the white flocked pre-breaded fillets of pollack and shrimp we dropped into the fryer, the bleached crab sticks had been sanitized of their contact with the dark "fishy" saltwater sea long ago—possibly years ago.

That summer at the Schwarzwald, I explored the dark underside of Midwestern food that my mom's good taste had so long denied me. Along with crab sticks, I sampled the canned corn, the jumbo carrots (boiled until soft as modeling clay), and fake gravy with a newly emancipated, curious eye. On most mornings I'd arrive late, un-breakfasted, and microwave a few crab sticks while I was tying on my apron. I cooked them carefully—maybe just four or five rotations—sliced them into elegant spires and arranged them on toast with slices of avocado stolen from our last taco salad. Around 11:00, before the lunch rush, I'd treat myself to a small bowl of canned corn. Pulled out of the tan steam table water, the kernels were so mature they were the size of pozole and so stubbornly chewy that they tasted like tortilla chips on the swallow.

It took nearly 10 more years of professional cooking, mostly in Manhattan fine-dining joints a full universe away from that diner, to forget about my dalliance with the pink faux-crab logs—and less than a year of living back in my hometown for the craving to return.

As I began to settle back home, I found myself indulging in a habit that persists to this day: rustling up lunch at the salad bar in the grocery store, I drop chunks of cold crab stick onto iceberg lettuce, top it with incongruous walnuts and a glug of blue cheese dressing and hustle it out of the store with a feeling of wrongdoing. Is my sea leg gorge the result of a pent-up seafood craving? Probably. So why do I feel so guilty? Why do I eat this salad while sitting in the driver's seat of my car?

Looking for concrete reasons, some substantiation if you will, of my love for junky fake crab, I turned to its origins, and a trusted source: Japanese Cooking, A Simple Art, by Shizuo Tsuji. Here's what the master of Japanese cooking has to say about fish paste, or kamaboko, also known as surimi: "After the pureed fish has been blended with a binding agent, molded into a desired shape, and, if necessary, colored, it is steamed. When cool, it is firm and has approximately the same texture as bologna."

Bologna: puréed and steamed, fast and cheap and common. That's it. My mother had strong opinions about bologna, too, shunning the putty-colored Oscar Mayer kind, but glorifying the homemade ring bologna my uncle prepared at the family meat market in Pierz, two hours south. It was as pink as raspberry bubblegum, as holy as the saints. Compared to their tangy skin-on hot dogs and garlic-breathing smoked sausages, the homemade bologna, seasoned only with smoke, salt, and pepper, was a little bland—but in the most reassuring of ways. In the summer, my aunt fried it in coins and we ate it with our hands, alternating slices of bologna and slices of melon. In the winter, my mom cubed it and dropped it into soup. Many times a year, we made the pilgrimage to Pierz to go to Bologna Days, the all-you-can-eat celebration of the freshly-made hot ring bologna sandwich that's been going on at the bar across the street from my family's meat market since 1962. There, sitting on a bar stool, I learned to honor what might be the country's most damned, controversial meat—hot ring bologna, peeled and swaddled in heavily buttered white bread—with great, over-dramatic fanfare. The tribute was comic, but we were serious about the sandwich. In other words, my family is as discriminating about bologna as I suspect Mr. Tsuji was about his favorite brand of kamaboko.

What is it about the springy texture of puréed, steamed sticks—junky or fancy, made of pork or made of fish—that breeds nostalgia? The fondness is textural, surely. All of them, the crab sticks, the fried bologna sandwiches, even those bloated canned ravioli you devour in secret, have an unmistakable give to the chew, a return volley in each bite, a certain familiar bounce to them. I think I know what that is: it's the bounce of innocence. 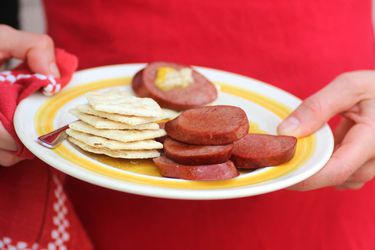