Early fall in Charleston, South Carolina, 1987. I'm a junior in high school, and life is in flux. Mom's taken a job back in New York City—the place we'd moved to Charleston from seven years ago. She commutes out Sunday mornings on the Piedmont jet through Atlanta and returns Friday nights. My brother, Matt, is in his freshman year at Harvard, so for the first time in my life I've got a bedroom to myself—cool—and he's mailing me cassettes of music I've never heard of. Galaxie 500. Tracy Chapman. Very cool.

But I'm not sure how I feel about the whole situation: Dad works full time as a gastroenterologist at the Med. U., so I spend afternoons ferrying my younger sister, Caro, to her karate and piano lessons in our rusty red Toyota and shopping for groceries for our dinners and the brown-bag lunches we take to school. Not so cool.

There is, on the other hand, something cool about having a jet-set mom. Friends in school ask: What does she do up there in New York? I get all chill and matter-of-fact, concentrate even more intently on cleaning the heads of my Walkman with a pencil eraser: She's director of publications at her alma mater, I say. She basically breaks even—the flights and all—but she does it to keep her résumé alive. Seems so mature—"résumé" and "alma mater" not being typical 16-year-old vocab—and makes it appear that I have more say in family matters than I do. But the fact is, I'm spending less time on my skateboard and surfboard and more time in our kitchen, which happens to be where I am the Sunday Dad tells me my parents' friend David is coming for supper.

"Really? You're cooking for David?"

I'm surprised because Mom's just left for NYC, and, while Dad's not some Archie Bunker–type dolt around the kitchen, David's one of their best friends, and he eats quality food. Our family has been attending his Thanksgivings for the past three years. The first was 1984. I was 13 years old and was served champagne for the first time—in a flute. I'd never heard that word to describe a glass. It was so thin, I worried I might crush it with my teeth as I sipped. I scooped inky black caviar out of a tin with a little pearlescent spoon.

"Sure, why not?" Dad says, pulling the electric frying-pan-with-legs from the cabinet and setting it on the counter.

"What are you gonna make?"

"Chipped beef with artichoke hearts," he says, pulling the skillet's cord from a drawer and uncoiling it.

"For David?" I ask. It's not that I don't like Dad's chipped beef—I love its salty-sour-creamy sloppiness. But it seems like a throwback to my parents' impoverished grad-school days—cranking open cans of this and that, tossing it around in a pan, spooning it over bread. And this dish looks frightening—a milky, hellish barf of a supper. Food you'd only ever serve to family.

And our family was better than that. I knew it from a very young age, back when I was four, maybe five years old, at another Thanksgiving. We were still living in New York then, and visiting my father's parents in Yorktown—only about an hour away, but it was a completely different world. The country. It had been a farm when my dad was growing up. On the drive up in my parents' drafty Plymouth Valiant, Mom tried to prepare us for the meal to come: the very dry turkey, the green beans cooked until they turned gray. The Miracle Whip. And Mom was right: The turkey was leathery-cottony. Miracle Whip tasted gross. We were a Hellmann's family. What we ate at home was so much better.

Fast-forward eight years to that first Thanksgiving, 1984, at David's house. It was the opposite of Yorktown—his food was way better than ours. And, where our Thanksgivings were like church, his was a house party, with everyone pitching in. Each guest was assigned a dish: an artist from New York whipped up bagna cauda, a garlicky olive oil dip for raw vegetables. A travel journalist from Texas made three purées—beet, lima bean, and sweet potato—so intense in color they looked like a palette of oil paints. Champagne and caviar served as snacks while guests finished up their dishes and told jokes. A gray felt suit—made by a German artist so famous that even Mom and Dad recognized it—hung on the wall as if it were a painting. The stereo blasted The Police and U2—it never even occurred to me that adults might like the music I liked. And this whole kitchen was different: The turkey baked in an enormous stove designed for a restaurant—a Garland, each of whose six burners had a few dozen or more gas jets. There was a grill above it—they called it a salamander. I was offered coffee from a French press—I'd never seen one before.

That first Thanksgiving, our family had been assigned to make a chestnut Mont Blanc for dessert. It had taken us the better part of two days: roasting the chestnuts, peeling them until our fingertips chafed, mashing them through a ricer (Mom had to go out and buy one). But for all our complaining, this insane mountain of chestnut purée with its cloak of sweetened whipped cream was nearly as impressive as a five-tier wedding cake. And when Mom served it, everyone at the table applauded, raved, thanked each of us personally for our efforts. I had never imagined that adults in my world, in Charleston, could actually be cool. And I wanted to be more like them. Having a hand in the making of the beloved Mont Blanc made me think I might have a chance to become like them.

So I'm watching my dad assemble the chipped beef in the electric skillet, its black plastic handles all misshapen from the many times the hot metal prong of the electrical cord has bumped up against them. And I'm thinking, this chipped beef is not the direction I was hoping we were headed from the triumph of the Mont Blanc. Dad opens the can of artichokes, drains the water through the lid into the sink, and dumps the chokes into the pat of butter skidding in its bubbles around the skillet's scarred nonstick surface. He tears open a couple of packages of Buddig-brand beef (paper-thin slices bound in a vacuum-sealed, congealed death grip) with his teeth, rips the beef with his hands into the pan. He stirs it around and asks me to open the sour cream. I squeeze the small container and out it plops into the pan. He breaks it up with his spoon and asks me to start splitting the English muffins, and then to put them in the toaster on medium. I'm complicit in this whole messy thing now.

The dish is done, and Dad leaves it on warm, calls Caro from practicing piano to the table. He fiddles with the beeper clipped to his belt, waiting for David, and I'm thinking: Maybe David won't show! Maybe Dad will get called into an emergency. And then, from the street outside the kitchen windows, I hear the low hum of a quality engine. I run to the door, and, through the sidelight, David's Jaguar—long and low, a silvery shade of green, like moss in moonlight—is backing up into a space on East Bay Street. I turn on the light in the foyer. What is there to do? I open the door.

"Hey, pal," he says, and shakes my hand. The word "pal" seems impossibly cool, and he appears genuinely happy to be here, so I'm hoping for the best. He steps into the kitchen.

"Chipped beef with artichoke hearts," he says, and he lifts the lid on the skillet. "It's just this thing I throw together on Sundays." And I can tell from Dad's tone—he's underselling it—he's sensed my anxiety. Or maybe it's his own, tough to know.

David looks down into the pan and says, "You're kidding me."

I feel my face flush, and I'm not sure how much of it's embarrassment for the apparent modesty of the dish or because I'm ashamed at myself for being ashamed of Dad's food. Because I'd defend my dad to the ends of the earth, and I'd be really angry if anyone criticized anything he cooked and served them for any reason. But the direction this goes is one that I completely hadn't considered.

"My mother made chipped beef all the time when I was growing up," David says. "Just like this. On Sunday afternoons. I can't believe it," he says, rubbing his hands together. "I love this dish."

Aside from the chipped beef, what I remember about that Sunday night is that we had a great time around the dinner table, talking about my debate team—I'd switched to Lincoln-Douglas from policy that year. Caro had just started (then quit) dancing school, and while it had been a subject of some tension in the household, David was resolute that she'd made the right decision. Caro had made him a sculpture in school, and he reported that he'd installed it on his staircase, next to another sculpture he loved, by Robert Smithson.

In the nearly 30 years since, I've thought about this night probably once a week, if not more. It's not just that chipped beef comes to mind whenever I think of comfort food—though it certainly is that. Having made a career in food with my brother—in knowing food, tasting it with intent, developing recipes we hope will inspire others to cook—I sometimes lose sight of the fact that food is, first and foremost, a way to gather friends and family around the table for good times. The best you can do is bring the people you love together, serve the food you honestly love to cook and eat, and let the chips fall where they may. 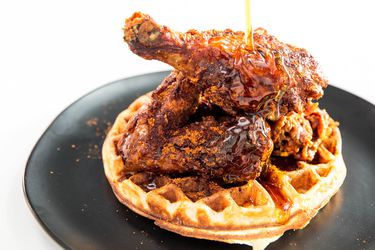 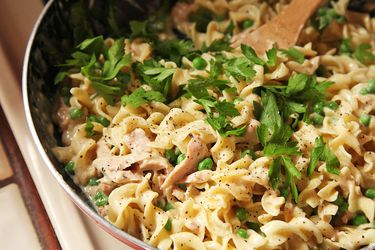 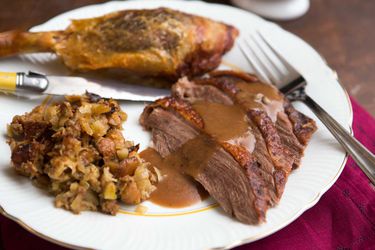