This humble pot of red beans is not merely a side dish, but rather the focal point of a gigantic meal.

When my wife and I make our regular trips to Bogotá, it's virtually guaranteed that three things will happen within the first 24 hours:

Colombians take their beans as seriously as they do their potatoes and arepas, which means they rank somewhere up there between family and religion. The fat red beans common to the Colombian Andes are not merely a side dish, they are the focal point of a gigantic meal.

At its core, a meal of frijoles needs nothing more than cooked seasoned red beans and rice, but from there it can grow in many directions. The greatest bean dinner is a fast-worthy plate called the bandeja paisa, and it reminds me of a full British breakfast in its makeup and extensive application of fried foods. Beans, rice, arepas, fried green or black plantains, avocado, a thin slice of grilled steak, chicharrones (deep fried pork rinds), a chorizo or two, a side of ají to sauce everything up, and a fried egg to top it off.

It's a ridiculously hearty meal eaten for lunch and meant to fuel the hard-working mountain folks through the afternoon. My family tends to use it as an excuse to take a nap.

No matter what you serve on the side, the most important element is the beans. I've never seen the big fat Colombian red beans on sale in the States, but the largest red beans you can find (or even dark kidney beans) will do the trick. When my Aunt Gloria makes them, she's inevitably making crisp fried chicharrones as well, so she uses the fried pork belly chunks to season the beans as they cook, along with onion, tomato, and a pinch of sugar.

Back home, where we eat far less fried pork belly, I just crisp up some raw pork belly in the pot before adding the beans and remaining aromatics.

To Serve (all optional): 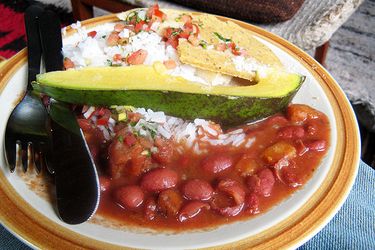 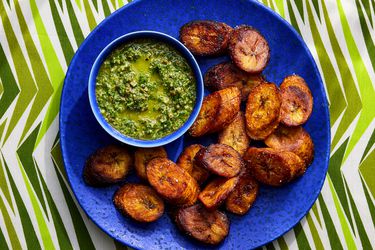 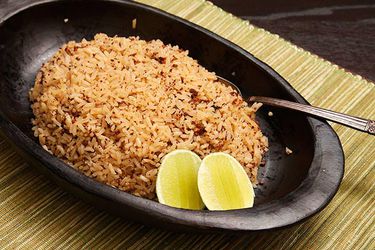