Coffee may not have literal roots in Italy (the plants don't actually grow there), but we have our friends on the Mediterranean boot to thank for one of the world's most potent punches of caffeine: espresso.

During the late 19th and early 20th century, Italy's Industrial Revolution was in full force, with big, cranking industries popping up faster than you can say "a-pizza pie." Before long, factory bosses noticed how much more productive their drones after a coffee break. But there was one big downside: The coffee break took too darned long.

Each coffee had to be brewed in smallish batches—usually as something similar to what we consider Turkish coffee, with pulverized coffee grounds boiled in water—which could take upwards of five minutes to make and even longer to sip.

What to do? Make it faster, of course.

One enterprising young Milanese man named Luigi Bezzerra did just what was needed to solve the productivity problem: he built a machine. Specifically, the world's first single-serving espresso machine, patented in 1901—capable of making very concentrated, gulpable drinks in as little as half a minute.

Bezzera's primitive prototype was essentially an enclosed metal tank, half filled with water that would be heated up over an open flame. As a by-product of this constantly heating water, a layer of steam would build in the top half of the chamber, increasing in pressure as the temperature rose. The first baristas would then unscrew a valve on the bottom of the machine, wherein would be placed a handle packed tight with finely ground coffee. The pressurized steam, desperate to escape its metal cage, would then force the hot water in the reservoir's bottom through the bed of coffee and—voila! (or, in Italian, ecco!)—a quick concentrated little magical elixir would appear.

Three sips later, the factories were buzzing again, and Luigi Bezzera would go down in history as the inventor of espresso.

(This all kind of means espresso was essentially a tool created by The Man to keep the masses churning out work, but let's not think of it that way. Keep lingering over your 4 p.m. shot break that mysteriously takes 30 minutes. Don't worry; we won't snitch if you won't.) 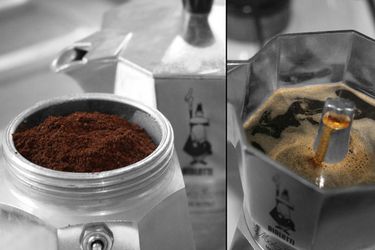