Forget the tomato juice. Put down the celery salt. If you can look past the Bloody Mary, you'll find a whole world of savory cocktails waiting for your enjoyment.

Now, savory can mean different things to different people, but the word normally refers to a richly flavorful food or drink that lacks sweetness. When referring to savory cocktails, we might mean drinks that lack sweetness altogether, or we might mean drinks in which any sweet elements take a back seat to other flavors, which might include vegetal, herbal, nutty, smoky, meaty, or umami-rich notes.

Savory cocktails can be built using savory ingredients, such as vegetables and salt, or they can be made from savory spirits, such as aquavit, gin, and sherry. Smoky spirits, such as mezcal and certain Scotches, can also add a savory side to a drink. For example, the next time you make a Manhattan, first rinse your cocktail glass with a little bit of smoky Scotch, such as Lagavulin. (Don't dump it after you rinse! Drink it!) Freeze the glass for a bit. When you pour the Manhattan into the glass, the smoky scotch will counterbalance some of the sweetness of the cocktail, while adding complexity to the drink.

Aquavit is another spirit that's ideal for savory cocktails. Think of it as a relative to gin. In gin, of course, the main flavor components include juniper and some combination of coriander, cardamom, citrus, orris root, and a few other things. Aquavit is similar, except that the flavorings are ingredients such as caraway, dill, fennel, anise, and others. Aquavit is typically a little drier tasting than gin, which makes it perfect for drinks that downplay sweetness.

Some drinks use a blend of techniques to achieve a savory taste. Alder, which recently opened in New York City, offers a drink called St. Marks the Spot, made from aquavit and carrot juice. The aquavit adds dryness and a bit of herbal complexity, whereas the carrot juice adds vegetal flavors and just a hint of sweetness.

Some drinks take classic recipes and savor them up with new ingredients. For its Beet Negroni, the restaurant Parm, also in New York, takes beet-infused gin and mixes it with vermouth and Campari. The Negroni's a drink that already downplays sweetness, but the beets just amp up the savory side even more.

Incidentally, if you're in New York, and you don't want to infuse anything with beets, you can pop over to Russ & Daughters and pick up a bottle of their Beet and Lemon Shrub. This stuff came to life when a Russ employee had the unusual but successful idea to mix lemonade with some of the vinegar in which Russ's beets steep. Though it's delicious on its own (albeit a little too sweet for my palate), I'm not ashamed to admit I've mixed it with gin for a simple but savory highball. I'm willing to bet it's even better with aquavit.

Speaking of shrubs, they make great savory beverages, just on their own, and even better cocktails, especially if the shrubs have aged long enough for the sugars to start to break down. (Want to make your own shrubs? Check out our guides here and here.) Top a shrub off with a little soda water, and you have an unusual and tasty soft drink; splash in a little gin or rum first, and you'll find you have a complex and savory cocktail.

There are even more cocktail ingredients in the vegetable drawer: at The Wayland in NY, they make a Garden Variety Margarita with tequila, lime, ginger, and kale juice. Ginger is a natural for savory cocktails; it marries well not only with sweet flavors but with savories as well, as a sort of bridge between savory and sweet. Want to get really wacky? Try infusing whiskey with mushrooms, like they do at Neta in the West Village. (They're also known for infusing sake with seaweed, and even going so far as to add delicately fishy bonito to a drink.)

Some vegetables are barely savory on their own, like the red bell pepper used in Summit Bar's Ground to Glass. To accentuate the savory side in that tequila drink (made with lime, bell pepper puree, and cucumber, the drink is rimmed with smoked salt.

If vegetable juices and purees seem a little futzy to you, you can very simply savor up your home bar. A thin slice of cucumber makes a nice garnish to a martini, for example, especially when using a cucumbery gin such as Martin Miller's or Hendrick's. Just float the slices delicately atop the drink, or line the inside of the glass with them. A basic margarita, even one without kale and ginger, tastes pretty good with a red-pepper garnish. Want to go all the way savory? Swap out the tequila for mezcal, and consider adding a pinch of salt or a little saltwater solution into the mix of the drink itself.

Have you experimented with savory cocktails? Tasted any good ones in bars near you? 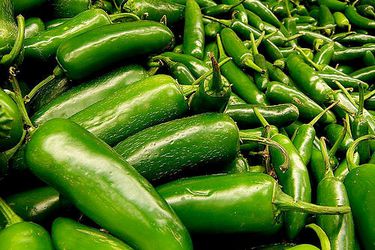 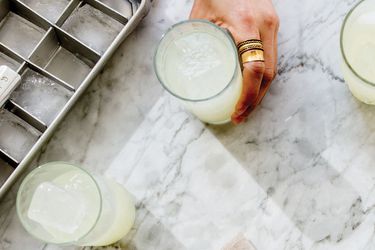 Ginger and Sesame Combine in This Spicy-Tart Mezcal Cocktail 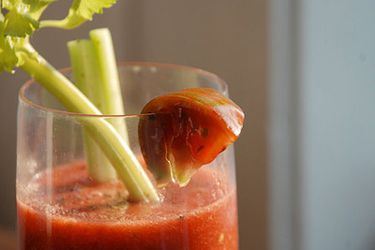