In Cocktail Overhaul, Jeff Lucas creates delicious updates of drinks from what many consider the dark days of cocktails. Today, he's tackling the Mudslide.

Growing up, one of my favorite treats was a homemade milkshake, specifically a vanilla malt. And while the classic malt is still infinitely satisfying, there are times that call for an alcoholic kick. I did not wish to obliterate my childhood love by drowning it in booze. Instead I turned to the Mudslide for inspiration, after all, this dark-ages drink is the quintessential spiked milkshake.

The original Mudslide was allegedly invented during the 1950s at the Wreck Bar on Grand Cayman in the Cayman Islands. In its heyday—and in the bars of chain restaurants where this cocktail still appears—the frozen drink was often made with a mix that came in a plastic bottle. Classy, right? It's time to elevate the Mudslide to the level of respectability and craftsmanship that it deserves.

The original Mudslide is a combination of vodka, Kahlua, and Irish Cream—some people also add a scoop of ice cream to the mix. In my overhauled version, the first thing that had to go was the vodka; it brings nothing to the drink in terms of flavor. I replaced it with Cognac VSOP, which provides a luscious backdrop for the drink. A bit of Ron Zacapa 23 year old rum adds an extra layer of complexity. Together, these superior spirits provide the rich foundation upon which the rest of the drink could be built.

For the coffee component I had several options, but what better way to get the true essences of coffee than to use the bean itself. I infused Carpano Antica Formula (a deliciously fruity and intense sweet vermouth) with whole coffee beans—you can adjust your time of infusion depending on how potent you want the coffee flavor to be.

To fill out the cocktail, I traded out the Bailey's for some fresher stuff. The rich texture of a raw egg is complemented by a splash of heavy cream—this is an ideal upgrade from the creepy richness of shelf-stable Irish cream. (Worried about the risks of raw eggs? Start here to find out more.)

The final result is luxuriously creamy, with notes of dark chocolate, bitter coffee, and just enough booze to kick you in the pants. Maybe the Frozen Mudslide at TGI Fridays or Applebee's is your secret guilty pleasure, but after one sip of this upgraded version, you might never want to go back. 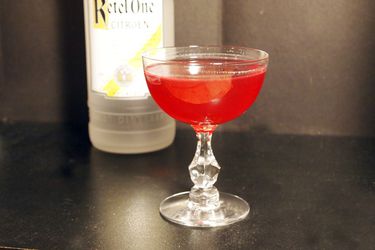