The Lynchburg Lemonade was the subject of a fierce legal battle between creator Tony Mason and the Jack Daniels distillery. Mason owned a restaurant and lounge and came up with the drink to help drive business—it quickly become one of his most popular menu items. In 1982 he gave the recipe to a Jack Daniels sales representative, and the branded ended up using the drink in a giant advertising campaign without crediting Mason for the invention. A lawsuit, of course, ensued.

Was it a drink worth fighting for? Not in its original form, I'd say. The classic Lynchburg Lemonade is equal parts Jack Daniels, triple sec, sour mix, 7-Up. The whiskey is buried under sour mix and sweet orange liqueur, plus the sweet soda on top. These days, I'd prefer to actually taste my spirits. The resulting cocktail should be balanced but the flavors of the base spirit should be evident.

My second problem with this drink is the sour mix. My advice: if you ever see a bartender reaching for an electric-green bottle (or worse, soda gun), please order a beer or straight booze on the rocks. Nothing can replace the tart bite of freshly squeezed citrus.

In the place of 7-Up, I popped in fresh lemon and lime juice with rich (2:1) simple syrup for a more full-flavored soda addition. A touch of peach liqueur instead of triple sec adds to the flavor complexity and gives a nod to the South.

The revamped cocktail packs a big punch from the bourbon, but is balanced out by the sweetness of the liqueur and a lingering background spice note from the Angostura. I'm not saying it's worth suing anyone over, but it's a big step up from the original. 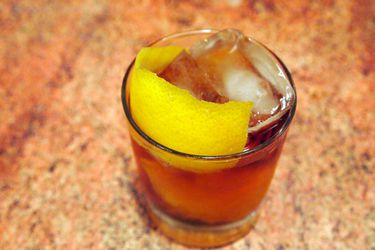