Today I'm going to step back a bit from my normal habit, in this space, of looking at cocktails and spirits in minute detail. Instead, I'll discuss a general theory of cocktails, one that should help you branch out from specific recipes and develop the ability to create new masterworks of cocktailing. With today's post as your guide, you too can someday become a master cocktologist.

One way to assess the quality of a cocktail is to determine whether it's a balanced drink. That is, how sweet is it? How dry? Is it more sour than it should be? Did the bartender take a heavy hand with the bitters?

In a well-balanced cocktail, every element harmonizes, and no single flavor dominates the others. Rare is the drinker who prefers, say, a Manhattan that tastes predominantly of vermouth, or one that's overly bitter from the use of too much Angostura.

So a standard recipe for a Manhattan might call for 2 parts whiskey to 1 part vermouth and a dash of bitters, and you'll find that such a recipe generally makes a balanced cocktail, one in which the whiskey takes the lead vocal and the other ingredients harmonize behind it.

But consider this: your choice of whiskey might lead you to change the amount of vermouth. A Manhattan, historically, was made with rye whiskey, not bourbon. Rye is spicier and drier than bourbon, so the 2:1 ratio of rye to vermouth makes sense. When I'm mixing a Manhattan with bourbon, though, I find that 2:1 often results in a cocktail that's too sweet. So in that case, it might make sense to decrease the vermouth a bit, or increase the amount of bourbon—say, 2 ounces of bourbon to 3/4 ounce of vermouth, or perhaps 2 1/2 ounces bourbon to 1 ounce vermouth.

The bourbon itself matters, too. Consider a bourbon such as Maker's Mark, a so-called wheated bourbon. Recall from my piece on bourbon that bourbon is made predominantly from corn (at least 51%, although usually far higher). The remaining ingredients in the grain blend can include a host of things, such as wheat, rye, barley, rice, oats, and other grains. Usually, a bourbon distiller will choose a flavor profile, either sweet or spicy, and then select a secondary grain to enhance that flavor. A wheated bourbon uses wheat as the secondary grain and thus is sweeter than one that uses rye.

So a Manhattan made from 2 parts Maker's Mark and 1 part vermouth will generally be sweeter than one made from a non-wheated bourbon.

Direction, and the Role of Personal Taste

But maybe that's what you want, a sweet Manhattan. You've chosen a specific direction for this cocktail and you know how to get there. Balance is very important in drink-making, but that doesn't mean that all cocktails need to be balanced. I said above that balance is one way to assess a cocktail. Another way to assess is to consider its direction.

What is the bartender trying to achieve with this drink? An after-dinner cocktail might well be a sweeter drink than something you'd have as an aperitif. Some drinks-slingers are crafting drinks in which bitters are the main element. The bartenders Kirk Estopinal and Maksym Pazuniak are known for highlighting cocktails in which cocktail bitters are used as base spirits, and not as flavor accents, as in most drinks. For example, their Gunshop Fizz starts with 2 ounces of Peychaud's bitters.

"Balance is important, but so is knowing your audience."

Also consider the personal taste of the person for whom you're mixing. My wife, for example, likes her sours sour. A classic sour recipe calls for 3 parts base spirit to 2 parts liqueur to 1 part citrus juice. So, for example, a Margarita recipe generally calls for 1 1/2 ounces tequila, 1 ounce triple sec, and 1/2 ounce lime juice. My wife finds this too sweet, so I usually decrease the triple sec to 3/4 ounce and increase the lime juice to 3/4 ounce. But serve that drink to most margarita drinkers and they'll find it too puckery and astringent. Balance is important, but so is knowing your audience.

Next week, I'll continue this discussion of cocktail theory with a look at cocktail families and secret formulas. 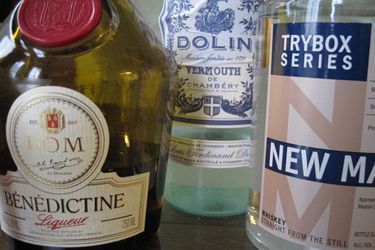