This dish is packed with cheese, both in a smooth béchamel sauce and plenty of the grated good stuff.

For so many American kids, boxed macaroni and cheese is one of those bedrock foods, as foundational to their identity as hamburgers and pizza. As a result, it has shaped their expectations about what mac and cheese is supposed to be—namely, gooey and silky-smooth above all else.

I was not one of those kids. When I was growing up, my sister and I were latchkey kids, which meant that we often had to fend for ourselves when we got home from school, fixing up snacks before our parents arrived later. My mom, not one to stock the pantry with processed foods, insisted that if we were going to eat stuff like mac and cheese, we had to at least make it from scratch. She taught us how to make a roux with butter and flour, then whisk in milk to form béchamel sauce. After that, we'd stir in cheese, making what the French would call Mornay, except we used cheddar instead of a Mornay's more typical Gruyère.

My whole conception of good mac and cheese, therefore, is somewhat at odds with that of many of my peers. Even though the béchamel-based sauce yields a less perfectly slick texture, and a starchier, slightly diluted cheese flavor, I still tend to prefer it over the processed kind, because at least it tastes more like the types of cheese I like: sharp and funky, not mild.

On top of that, I've never been fully sold on the idea that a perfectly emulsified goo of cheese is the be-all and end-all of mac and cheese. Don't get me wrong—a totally broken and greasy mac and cheese is an unmitigated disaster. There's nothing good about frizzled beads of milk protein suspended in a pool of oil. And yet, a little bit of grease isn't always so terrible, especially when it's accompanied by the greatest of all melted-cheese qualities: stretchiness, something a gooey cheese sauce never delivers to my satisfaction. If a small amount of oil is the consequence of some awesome cheese stretch, I'm more than okay with that.

What I've settled on is that my ultimate version combines the best of both worlds. I want a perfectly emulsified cheese goo that can coat the pasta in a creamy glaze. But I also want some unadulterated cheese mixed in that delivers concentrated flavor and, when melted, a little bit of that trademark stretch.

First, though, we have to answer a question.

Why Bake Mac and Cheese at All?

If you've ever opened a box of the instant stuff or made stovetop mac and cheese from scratch, you know there's no real requirement to put it in the oven. You save time and get more or less the same thing without that extra step.

In my opinion, there are two arguments for baking it. First is the crispy topping. In some recipes, you put the mac and cheese in a baking dish and toss it in the oven until the top is bubbling and browned. In others, you take it a step further and add a crunchy topping of some sort. I prefer the latter approach: As long as we're going for some crunch, we might as well go for maximum crunch. In my recipes, that means a buttery panko bread crumb topping, baked until golden brown.

The second reason for baking mac and cheese is that it transforms it into a make-ahead dish. You can assemble it in advance, refrigerate it, and then finish it in the oven when you're ready to serve. Of course, the longer you try to hold it, the more moisture the pasta will gradually absorb from the sauce, which makes for a softer texture. But I don't really mind that. In many ways, overcooked pasta is actually preferable to al dente in a cheesy baked dish like this—it'll make for more of a cohesive, scoopable mass, not unlike a savory, Americanized kugel.

The question, then, is how to do it. After several weeks, and an ungodly amount of mac and cheese for breakfast, lunch, and dinner, I've settled on two methods: a classic béchamel-based version that's extra cheesy, and a modern (and equally extra cheesy) recipe that uses the emulsifying powers of sodium citrate, a type of salt.*

*I tested, but didn't end up using, the really clever cheese-sauce method that Kenji developed for his stovetop mac and cheese recipe. I found that it didn't translate as well to the baked version of the dish; it tends to break when subsequently baked, diminishing its gooey texture and cheesy flavor.

This classic béchamel-based version is loaded to the hilt with cheese. Not only do I pack as much cheese as I can into the sauce itself, but I then mix the cooked pasta and cheese sauce with additional grated cheese, for tiny pockets of stretchy, melty cheese throughout. One of the side benefits of this method is that you get enhanced browning in the oven, especially on the bottom and sides of the baking dish, thanks to the flour and butter in the sauce.

The first step is to make a roux by melting butter and then whisking flour into it, cooking them together until the flour has lost its raw smell (but not so much that it browns!). Then slowly whisk in milk to form a smooth and creamy béchamel, and finally stir in grated cheese. This order is important: If you add the cheese too early, it has a tendency to break, turning clumpy or oily. Adding it to the thickened milk helps keep it smooth and emulsified.

I used sharp cheddar in this recipe, but you can pick your own favorite, as long as it's a similar type of semidry cheese, like Swiss, Gruyère, or Jack. I worked a full pound and a half of cheese into a mere two cups of béchamel, so this is a very cheesy sauce.

Next, I toss it with the pasta, which I undercook just slightly to account for it softening further later. When it's cooled just a little, I fold in an additional half pound of grated cheese—this is going to provide those pockets of stretch and full-on cheesiness. I like to use Gruyère here for a little extra funk, but again, you can use whatever you want.

In the finished dish, you can see some of that extra browning, courtesy of the flour and butter in the cheese sauce. And if you look closely, you can see how the sauce has plenty of goo, but also little blobs of cheese that will stretch when pulled. That ever-so-slight sheen of oil? C'mon, admit it, it's sexy.

This recipe was cross-tested in 2022 and updated to guarantee best results: For a creamier mac and cheese, we increased the sauce by 50%, and lowered the oven temp to eliminate the possibility of the sauce breaking.

For the cheese, any semi-firm cheese, such as cheddar, Swiss, Gruyère, Fontina, or Jack, can work here; feel free to use whichever appeals to you.

Casserole can be assembled through the end of step 4, then covered and stored in the refrigerator for up to five days before baking. Increase baking time by 15 minutes if refrigerated. 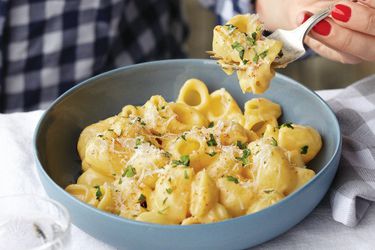 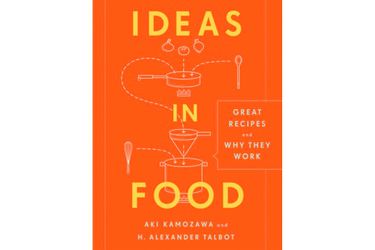 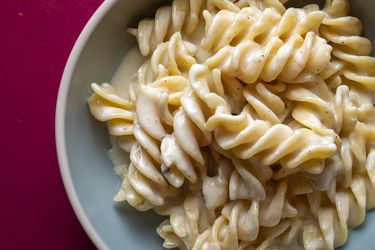 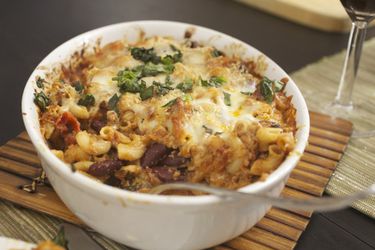