Know what casino means in Italian? It means "a big mess." That's funny, because you know what your average plate of clams casino usually is? Yeah: It's a mess. Despite being made from ingredients that should be nothing short of spectacular together—clams, bacon, butter, and bread crumbs—most versions of clams casino are a sterling example of how to take a good thing and turn it into a train wreck.

Here's what often goes wrong: First, the clams are topped with fine bread crumbs, which, when dry, have the gritty texture of a mouthful of sand. After they soak up the juices, they have the equally unpleasant texture of either that same sand, now wet, or really soggy bread pulp (or sometimes both, depending on the specific bread crumbs and just how soaked they get). I like clams and sand. Both of them make me think of the beach. But I only like one of them in my mouth.

Second, most recipes take a halfhearted approach, baking shucked clams with butter, seasonings, bacon, and bread crumbs, but missing obvious opportunities to concentrate, meld, and layer flavors. A lot of folks just slap a shard of bacon on top as an afterthought and somehow think they've done a good job.

We can do better—we can clean up this mess. Not only that, we can actually make this dish easier to prepare by eliminating the shucking step and rethinking the recipe so that it can be made ahead, with nothing left to do but toss the clams in the oven right before serving.

Let's start with the bread crumbs. Fine bread crumbs don't do us any favors in a recipe like this. Coarse ones, on the other hand, add a crunchy texture that contrasts well with the soft clams. Japanese panko bread crumbs are a great choice here, but, of course, we don't want to use just plain ones. Instead, take this opportunity to layer flavors by dicing bacon, then cooking it until it's rendered plenty of fat, leaving the bacon bits browned and crisp. Then stir in the bread crumbs, allowing them to soak up the bacon grease while they toast over the heat. Toasted bacon bread crumbs > all other bread crumbs. Moving along.

Make a Bacon and Clam Compound Butter for Even More Flavor

That's not the end of the bacon, though, because I also want bacon flavor in the clams themselves. Now, like I said, most recipes tell you to shuck the clams, then bake them with the other ingredients more or less haphazardly spooned on top. Not this time. The game plan here is to make a compound bacon-clam butter. That may sound fancy and difficult, but it actually makes this recipe easier. No shucking, no harvesting clam liquor, and no need to make this recipe from start to finish right before serving.

It's as simple as can be: I sauté some more diced bacon to render the fat again and lightly brown the bacon, then I stir in minced shallots, garlic, and red pepper flakes. (A lot of recipes call for diced bell peppers, but I can't begin to understand why anyone thinks that's a good idea here.) I cook them until they're softened, then add a splash of white wine, toss in the clams, cover, and cook until the clams start to open.

As each one opens, I pluck it out right away and set it aside to cool. Meanwhile, I cover the pan back up, continuing to check every minute or so and removing the clams as they open until they're all done. The clams will release their liquid into the pan as they open, which adds tons of great clam flavor to the mixture.

Before moving on, let's review a couple of things about clams. First off, you absolutely must purge them before cooking them. That's because a lot of clams have sand hidden within, and the only thing worse than sandy bread crumbs on your clams is actual sand in them. To purge clams, I submerge them in salted water for 30 minutes. If the bottom of the container is clear of sand after those 30 minutes, go ahead and cook 'em. If there's sand on the bottom, lift the clams out, drain and rinse the container, then fill it up again with fresh salted water and drop the clams back in. Do this as many times as necessary until they stop spitting out sand.

Second, there's a bit of folk wisdom out there that claims you shouldn't eat a clam that refuses to open during cooking. That's hogwash. A clam that's closed tight is a live clam fighting a respectable—but futile—battle. The only clear sign of a dead clam is a clam that's gaping open. So, most importantly, don't buy or cook clams that are wide open and refuse to close when prodded, because they really are dead and could make you sick. Some clams will take a surprisingly long time to pop open during cooking, but they almost always will eventually. And even when they do, in some cases they'll open just a crack and not all the way, which is fine—just pry the shells open. In the rare event that a clam absolutely refuses to open even after prolonged cooking, try sliding a knife between the shells. If there's a plump clam inside that smells fine, then go ahead and use it. If you find a mud-filled center, a possible though unlikely scenario, toss it and be glad that it didn't get into your food.

Once all the clams have opened, keep your pan uncovered and continue to cook the mixture of shallot, garlic, bacon, wine, and clam juice until the liquid has fully evaporated and you're left with a jammy, soffritto-like mixture. This is pure, concentrated clam magic right here, and we're going to mix it into softened butter.

A good dose of fresh parsley helps perk the whole thing up. When you're done, you'll have a clam compound butter on your hands, and it will be amazing. Be very careful about adding salt, as the concentrated clam juices and bacon may well be salty enough. Whatever you do, don't use salted butter.

By this time, the clams will have cooled enough that you can finish preparing them. Start by pulling the two shells of each clam apart, and throw away one of them. Make sure no little bits of shell around the hinge come off and get into the clam. Next, free each clam from the half-shell it's still attached to. Then settle it right back into its shell and set it down on a rimmed baking sheet.

Now take the clam butter and spread it onto each clam, packing it into the crevices and more or less burying the clam in it. Don't be shy, just pile that butter on. Then sprinkle some of the bread crumbs on each clam.

The great thing here is that the butter protects the clams, shielding them from the air and keeping them plump and moist. As a result, you can prep the recipe up through step 8, then refrigerate the clams up to overnight, and they'll be ready to rock whenever you want to serve them.

Finishing Your Clams Casino (And an Added Bonus!)

To finish the clams, just pop them in a 450°F oven until the butter is fully melted and heated through. Then load some more of those toasted bacon bread crumbs on top, this time with a bunch of fresh parsley mixed in. Transfer them to a platter, throw some lemon wedges on the side, and dig in.

And here's a little bonus: You're going to have extra clam butter left over. Save it! Then, one day soon when you're really hungry and tired and stressed and can't be bothered to cook anything elaborate, just throw some spaghetti in a pot of boiling water, then toss it in that bacon-clam butter. You may feel like a hot mess, but when your idea of an easy dinner is "spaghetti casino," nobody would dare call you one.

For the Bacon Bread Crumbs:

To purge clams, submerge them in a large container of salted cold water and let stand for 30 minutes. Lift out clams. If there is no sand in the bottom of the container, they're ready to scrub and use. If there is sand, drain and rinse the container, fill with fresh salted water, and return clams for 30 more minutes. Continue this process until the water is clear and free of sand. 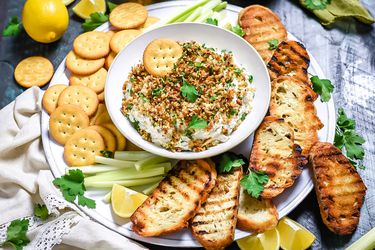