Nasty Bits lovers, if you think I'm cooking heart for Valentine's Day, then you underestimate my mettle. Why talk about matters of the heart, when we've yet to cover penis? The Chinese believe the organ to possess all kinds of medicinal properties related to virility and general health. Though I harbored no presumptions about its libido-enhancing abilities, I was curious about the culinary merits of eating penis: Namely, is it delicious? Even more pressing, what does the organ taste like in the first place?

A quick search yielded the somewhat opaque answer that the penis is primarily vascular tissue, composed of tubes with names like vas deferens. Knowing something about its anatomical breakdown brought me no closer, however, to imagining the taste. Flesh, fat, skin, tendon, and even cartilage are all parts to which meat eaters are exposed. An organ composed of vascular tissue, on the other hand, calls to mind spongy textures and very little flavor. Lucky for me, my favorite Korean market regularly carries packs of beef "pizzle," the typical euphemism for penis, so acquiring the organ was the least of my worries.

The first time I bring home an entirely new cut of offal, I start testing with a simple pan-fry in the trusty cast iron skillet. Doing so allows me to get a feel for the texture and flavor, a gauge for how I should proceed next. I cut a section of the pizzle into half-inch slices, salted and peppered, and tossed the pieces into the cast iron. The moment the pizzle hit the skillet, the slices of tissue, which were spongelike and soft when raw, seized up immediately, shrinking and curling into hard little sections resembling dried scallops. When I tried to eat the pan-fried pizzle, the texture was so tough as to be inedible; the more I chewed, the more the pizzle resisted my molars until finally, I gave up and spit it out. A long simmering, then, seemed the only option.

Stewing the pizzle was easier conceived than done. Having tossed the sections of penis into a beef oxtail soup, I found three hours into the cooking time that the meat was tender and cooked through, yet the pizzle seemed only slightly less tough than before. I retrieved the sections from the pot of soup and tossed them into a slower cooker before bedtime. The next morning, I awoke to find that the penis had been stewed into irreparable flaccidity: soft and sticky with a gummy texture, the chunks tasted curiously neutral—not even bland but simply lacking any flavor whatsoever.

Confounded, I emailed Fuchsia Dunlop, cookbook author and researcher extraordinare, to ask for her advice and possible recipe ideas. (In an interview years ago, Dunlop recalled having eaten beef penis in a Sichuan-style beef soup.) Dunlop kindly obliged and offered her instructions as to how to proceed, with the qualification that she herself found the part to be not particularly delicious. As Dunlop wrote:

I've found one recipe for Chonginq ox penis soup in a book: Chongqing is actually where I tasted it myself, and this soup is a local speciality. The recipe instructs you to peel off the outer skin, and then cut in half lengthwise along the urethra. Then clean and thoroughly soak in cold water for 30 minutes.

Bring it to boil in a large potful of water, then skim and add ginger, Sichuan pepper, Shaoxing wine, an old hen, and then cook slowly over a gentle flame, turning from time to time so it does not stick to the pot. When it's just over half cooked, strain out the whole spices, then bring back to the boil and continue to simmer over a gentle flame. When it's nearly cooked, remove the penis and cut into bite-sized strips, then return to the pot with some gouqi (goji berries, wolfberries), bring back to the boil, then simmer until very tender. The cooking takes a total of about ten hours, and the chicken should be set aside for other uses before serving (you don't serve it with the penis in the soup). Season to taste with salt before serving, and a little lard if desired.

I went back to the Korean market for an old hen and more pizzle. Then, proceeding as per Ms. Dunlop's instructions, I whiled away Superbowl Sunday stewing the penis, checking every so often on its progress. By the eighth hour, the sections of pizzle had softened considerably; the broth had turned a golden yellow hue. By the tenth hour, the pizzle seemed to have thoroughly softened. I retrieved the penis from the broth, thinly sliced the sections, and seasoned with more salt and lard.

The warm slices of pizzle were slimy and sticky, with the texture of a cooked gummy. I set them aside and waited an hour or so for the pizzle to cool down; then, dressing the slices in soy sauce, vinegar, and sugar, I tossed the whole mixture with finely chopped cilantro and tried eating again. Firmed up, the texture of the pizzle had improved considerably, bearing a close resemblance to beef tendon. The taste, however, was still bland. Even dressed in soy sauce, the pizzle had none of the beefiness of beef tendon.

The broth was heavily bodied, yet it was also strangely flavorless. The goji berries, one of my favorites additions to tea and hot pot, provided a pleasantly sweet flavor to the broth. The Sichuan peppercorns lent just a touch of their signature numbing sensation. Sipping it, I felt considerably warmer, though more no strengthened than usual.

Hours of stewing, three pounds of beef penis, and one Fuchia Dunlop–inspired recipe later, I'm no closer to determining once and for all if pizzle is tasty to eat. That said, if prepared in the special Chongqing style, beef pizzle is not an altogether bad dish, especially given its purported benefit. Still, it probably won't be what I'd serve on the special day. Happy Valentine's Day to those who have found their better halves and those who are still seeking that special someone with whom to share a pig's head. 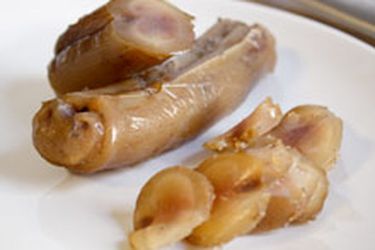 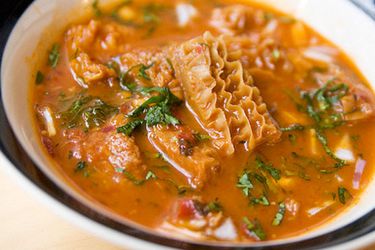 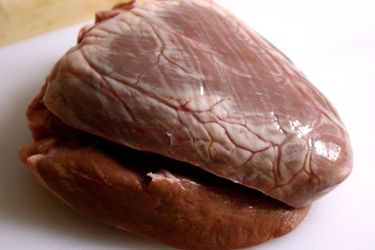