Within moments of sharing my recipe for a classic jelly roll, the comments and emails were pouring in: How can I make this chocolate?

You can take any basic cake recipe and make it vanilla by adding a relatively small quantity of vanilla extract (a mere spoonful) or the scrapings of a vanilla pod (a few grams at best) to layer in flavor and aroma. Because vanilla comes in such concentrated formats, it has virtually no impact on the behavior of most batters and doughs. Vanilla functions like an herb or a spice or an essential oil; it's a flavoring agent, not a building block.

Chocolate, on the other hand, is a building block.

Whether as a bar or cocoa powder, chocolate is loaded with fat and fiber and carbohydrates (starch), and we use it in relatively high proportions. Who ever made a good chocolate cake with just a tablespoon of cocoa powder? Because of its nature and substance, chocolate profoundly affects the properties of a cake, in terms of tenderness, hydration, pH, gluten development, and more.

Chocolate cakes may also benefit from the use of bittering agents, like instant espresso, to heighten the chocolate's presence in a sugary environment, as well as alkalizing agents, such as baking soda, to soften its natural acidity (if this hasn't been done already via a Dutch cocoa).

These differences between chocolate and vanilla are why the ingredients and ratios in my devil's food cake look absolutely nothing like those in my vanilla butter cake. And that's true for my approach of a chocolate roulade as well, all the more so because of its unique format.

Because of its tenderizing effects, chocolate can undermine the structural integrity of baked goods. That's not a huge problem in layer cakes, as they only need enough cohesion to stack and slice. If a piece gives way under the pressure of a fork, people will only swoon over the cake's tenderness. That means a layer cake can accommodate a pretty ridiculous amount of chocolate (my devil's food uses more than half a pound).

But a roulade needs enough structure and pliability to hold itself together as it is rolled or else it will crumble, crack, and fall to pieces. Search Google images for "chocolate roulade" to put the realities of this risk on full display. On the flip side, backing down on the chocolate will result in diminishing flavor returns; the cake will be "chocolate" in name only.

For these reasons, making a flavorful chocolate roulade that won't crack is something of a balancing act, but ultimately the solution is simple: Amp up the gluten. The first line of defense in my chocolate roulade is bread flour to increase the gluten-forming proteins in the batter from the start. To further facilitate gluten development, I increase the liquid content of the recipe via added water and an extra egg.

In a vanilla batter, those shifts would make the cake rubbery and tough, but that's not a risk here. My chocolate roulade is essentially a negotiated truce between tenderizing chocolate and toughening gluten, with one holding the other in check, preventing one of them from gaining the upper hand. The result is a chocolate cake that's fluffy and flavorful and strong enough to roll without cracking.

That's not to say it can't crack; any roulade can crack when overbaked, handled too roughly, or rolled up when chilled. But cracking needn't be a fundamental property of a chocolate roulade, and making a good one doesn't take much more effort than a classic jelly roll; there's only one extra step—making a dark chocolate ganache to flavor the cake.

Because cocoa powder can be so starchy and drying, I prefer to make my chocolate roulade with dark chocolate alone—unsweetened chocolate if possible. My favorite brands of 100% chocolate include Dandelion, Tcho, Pralus, or Raaka. These can be purchased from the companies directly or found in specialty shops, if not online.

Truly delicious unsweetened chocolate can be hard to find on the fly, requiring a special order or at least a trip to a gourmet shop of some kind. Meanwhile, what's stocked in the baking aisle of most supermarkets is mass-market chocolate at its worst: harsh, unbalanced, and lacking in richness and flavor. So if you don't have time to source the good stuff, it's far better to reach for a chocolate in the 80% range instead—and most shops carry a decent range in the snack aisle (check out our guide to the best, extra dark chocolates commonly found in the supermarket).

With the right chocolate—a top-notch 100% bar or else one in the upper 80% range—making the ganache is easy. Start by melting some butter until it's hot (oil can also be heated up for the same purpose, if you need a dairy-free cake or if you'd like to infuse it with more flavor from a hazelnut or pistachio oil), then whisk in the chopped chocolate and some vanilla.

Because the ganache needs to be fluid and warm to incorporate it into the batter without deflating it, this isn't a viable make-ahead step. It will hold for as long as it takes the sponge cake to come together but no longer.

Aside from the addition of instant espresso powder to add a note of bitterness (it's not here to make a coffee- or mocha-flavored cake), the basic steps of the sponge cake are the same as those of my jelly roll. Whole eggs and sugar are whipped in stages, along with the baking powder, salt, and baking soda, to develop a stable foam.

The mixture will start off runny, dense, and dark, then aerate into something thick, light, and pale. Ballpark figures for the timing of each step are included in the recipe, and they can vary depending on the power and capacity of a given mixer along with variables like ingredient temperature. The physical cues are a far more important metric for judging each step (this is true of all recipes; times will always vary from kitchen to kitchen and are intended to contextualize the process rather than provide a specific goal).

Because I like to use cold eggs, there is little risk of over-whipping this foam, shy of leaving the mixer on for 23 minutes while you catch an episode of Dragon Prince. For that reason, I'd rather err on the side of over- than under-whipping the foam. If you have any doubt that it's ready, let it go a little longer, until it more closely resembles the thick, foamy, and pale mixture I've described.

Once it's ready, reduce the speed and add the warm ganache, followed by water and bread flour.

As with my jelly roll, I recommend shutting off the mixer before the flour has been fully incorporated, then detaching the whisk attachment and using it to finish those last few strokes by hand.

At this stage, you can't over-mix the batter until the streaks of ganache and flour disappear, so don't be shy about mixing. But once the batter looks homogenous, continued mixing will only deflate the foam, making the cake heavy and dense.

As with my jelly roll, the last step is comically simple: Spread the batter into a half sheet pan that's been lined with parchment and lightly greased, bake until the cake is well risen and firm to the touch but still puffy and soft, then cover tightly with foil and cool to about 70°F (21°C).

Once cool, take off the foil, spread a filling on top, and you're ready to roll.

The filling can be literally anything, from a bright pink raspberry whipped cream to the gelato-like French buttercream spiked with homemade pistachio paste I used here, or anything in between.

Use the parchment under the cake to lift it up and gently roll it over; be careful not to fold the cake, as it will crack along a sharp crease, but as long as the motion is as gentle as a wave, it will twirl up without any fuss, and the parchment makes it easy to handle and lift the cake as you go.

For a classic chocolate roulade, that's where the project would end. But for a Yule log, the cake is given a finishing coat of ganache, then a piece (or two) is cut off to make a "branch" (or two) that can be attached elsewhere, with more ganache to smooth over the seams.

When the ganache has started to thicken and set, I run a fork up and down the length of the cake to roughen it with a bark-like texture.

Finally, a scattering of meringue mushrooms will complete the forest floor illusion.

Made with toasted sugar, loads of vanilla, and good-quality chocolate, these are not the flavorless Styrofoam-like meringue mushrooms you may be accustomed to. They are a deliciously crunchy contrast to the soft and tender cake. Dusting a little matcha here or there is also a nice touch, suggesting a bit of moss creeping over the log, but it's used so sparingly it's more of an aesthetic touch.

However it's filled and decorated, a chocolate roulade can be a stand-out dessert of its own—with or without the festive, Yuletide flare. 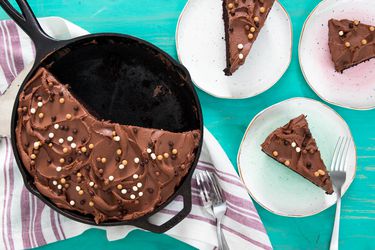 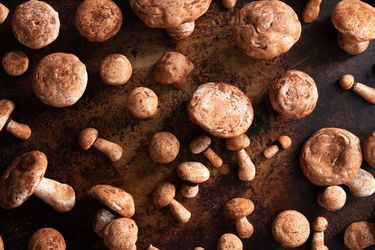 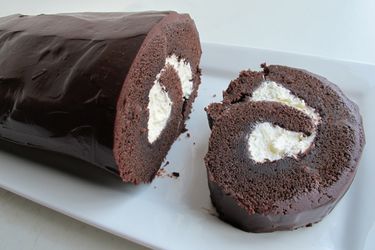 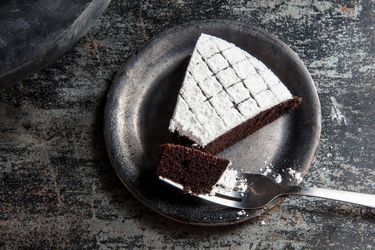 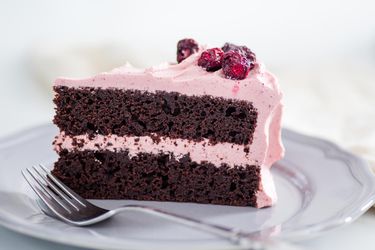 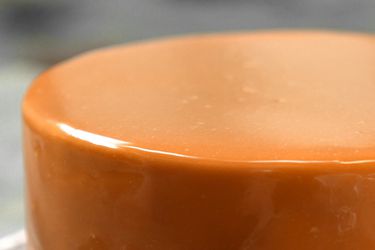