A thick, creamy filling of homemade Nutella makes these bittersweet breakfast buns a perfect companion to a steaming mug of coffee on a lazy morning—lazy, because you make the dough the night before!

It doesn't matter if I'm having friends over for brunch or staying with family through the holidays—my only wish is to keep things simple. I have absolutely no desire to get up early and bang around the kitchen trying to whip up a special breakfast.

What I want is to start a pot of coffee, turn on the oven, and then crash on the couch until the scent of yeasty dough pulls me back into the kitchen. I want to unveil a pan full of perfect pinwheels, I want to slather frosting on top, and I want everyone to get excited. I want to relax and have a good time.

But that doesn't mean I'm not willing to put in some work! I love the process of baking, at least when it's on my terms—tackled bit by bit over the course of a few days, and never requiring that I race the clock, with a houseful of hungry folks watching over my every move.

For me, making breakfast for a crowd (at my house or elsewhere) is about sharing a meal and hanging out. Which I can't do particularly well if I've had to wake up hours earlier than everyone else to pull off some last-minute breakfast caper, leaving me frazzled and with a trail of dirty dishes in my wake. I like my mornings calm.

Baking is a discipline that rewards those who are patient, methodical, and willing to do a bit of planning—and such is the case with these yeast-raised breakfast buns, stuffed with a chocolate-and-caramelized-hazelnut spread (a.k.a. homemade Nutella), then slathered with whipped mascarpone spiked with vanilla.

It's absolutely not something you can pull off on a moment's notice, but that's the point. It's something you make in advance of a breakfast gathering, so that you can actually enjoy yourself when the time comes.

This recipe is based off my classic cinnamon rolls, which start with a rich but eggless dough made with thick and tangy Greek yogurt. For a complete walk-through of that recipe, covering everything from ingredients to gluten development, and including photos of every step, check out our guide to the best no-fuss cinnamon rolls.

That's the exact same dough I'm using here. I experimented with using roasted-hazelnut oil to replace the butter, but I found its character in the dough too mild to justify the expense. Ultimately, I enjoyed this recipe best when I kept the dough simple to better showcase the real star, that homemade Nutella.

My version contains more hazelnuts than any other ingredient, and the sugar involved is fully caramelized, taming the overall sweetness and adding complexity through those toasted notes. It's a rather lean recipe, with the hazelnuts and chocolate serving as the primary sources of fat, so their character comes through loud and clear.

It's worth noting that I haven't tested this recipe with commercial Nutella, a spread made primarily out of sugar and palm oil, with just enough hazelnuts and low-fat cocoa to suggest their flavor. It's a very different composition—different enough that I can't say with confidence that it would work as a 1:1 replacement here. It might, but I don't care to find out; my heart belongs to this hazelnut- and chocolate-centric version (which can be prepared weeks in advance).

The chocolate-hazelnut spread is twirled up with the prepared dough after its first rise, after which the dough is cut into pieces with a strip of butcher's twine or unflavored dental floss. Garroting the dough keeps the pinwheels nice and round; the soft dough will be squished out of shape if you use a knife.

The portions are then arranged in a parchment-lined brownie pan (specifically, a nine- by 13-inch anodized-aluminum baking pan) and covered in foil for a 12- to 48-hour cold rise in the fridge. They can also be frozen much longer, then thawed overnight to be baked the same way.

Those options give me plenty of time to knock out the dough days or even weeks ahead, and the cold dough travels well (say, when I'm heading to my parents' house for the holidays).

As with my cinnamon rolls, this recipe keeps the buns covered during most of their time in the oven, with the foil pulled off only at the end to facilitate browning and keep the dough from drying out.

At some point between making the dough and baking it off, you can knock out the whipped-mascarpone frosting as well, then refrigerate it in a disposable pastry bag or zip-top bag until needed.

Like the OG recipe, these buns are a fully wake-and-bake affair, keeping things simple so I can kick back and relax with the people I love most, and bask in the glow of a fancy breakfast that didn't require any morning hustle to pull off. 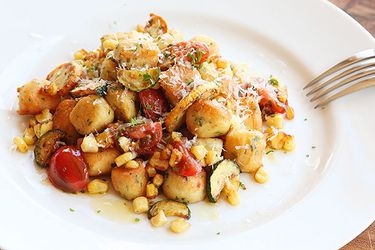