Chipotle Introduces New Vegan Burritos and Tacos Across the Country

They're called "Sofritas," they're made of tofu, they're 100 percent vegan, and they're pretty darn delicious. The saucy, crumbled, sausage-like filling, which can be ordered in any of Chipotle's burritos, tacos, or salads, has thus far been available in select markets, mainly on the West Coast. Today, Chipotle announced that starting March 3, they'd be expanding its availability to both coasts and several markets in between, with plans to roll it out across the country in the works. It's the first nationwide new menu item the company has introduced since its inception.

I've been following the vegetarian options at Chipotle with great interest ever since Culinary Manager Nate Appleman gave me a taste of some early prototype recipes he was working on at the Chipotle test kitchen in Chelsea. For a while, it seemed that the "Garden Blend," a vegan product that had a texture and flavor similar to veggie burger patties, was going to be their vegan option, but thankfully they went back to the drawing board on that one.

The new Sofritas are made with tofu from Hodo, an Oakland-based company that uses traditional methods to produce their organic tofu. For several years, Appleman has been using the tofu at Shophouse, Chipotle's foray into the world of Asian cuisine serving sandwiches and rice bowls in D.C.

At Chipotle, they braise the crumbled tofu with chipotle and poblano peppers and a ton of spices in an aromatic broth. The resulting mixture is a moderately spicy stew with a sort of sloppy joe-like texture.

I've had the Sofritas at several events and at West Coast branches of the chain, and if they manage to keep up the quality of the product across all their stores, this is good reason for vegetarians, vegans, and even veg-curious carnivores to rejoice.

We'll be back with a full review in short order, but until then, what are your thoughts? Have you tried them yet? Would you be willing to if they reach a store near you? 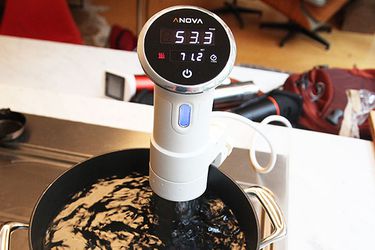