Yesterday, I explained water-velveting: a meat-tenderizing technique I prefer to use when stir-frying at home instead of the more traditional oil-heavy method. In my side-by-side tests, I saw almost no differences between stir-fries made with the water method and the made with the oil method.

Starting today, and for the rest of this week, I'm going to share some recipes using the water-velveting technique. Up first: this delicious sweet-and-sour pork stir-fry. And for those of you who don't eat pork, this recipe also works well with chicken; just substitute strips of chicken breast for the pork and follow the rest of the recipe as written.

Here's how I make it:

I start by marinating the pork in a mixture of egg white, cornstarch, wine, and seasonings for 30 minutes, just as I would with traditional velveting. But then, instead of par-cooking the pork in a hot oil bath, I use water with just a small amount of oil floating on top.

I cook the pork until it's nearly, but not all the way, cooked through, then remove it from the water.

It's important to let the meat dry well, since adding very wet meat to the stir-fry will halt the browning that you're aiming for. Several good shakes in a colander should do it.

Then I clean my wok, add a small amount of oil and start my stir fry, here with onion and bell peppers.

I add the velveted pork next and give it a good toss.

Then it's time for the sauce! I start by pushing the pork and vegetables up the side of the wok so that the sauce sits in the bottom by itself and begins to boil. Once it's boiling, I stir it all together until the sauce has thickened and coats the meat and vegetables.

After tossing in some pineapple chunks, the dish is ready to serve. 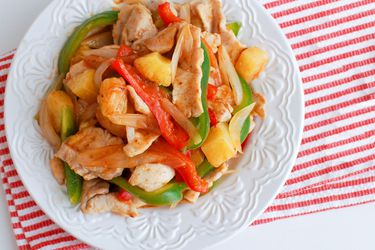 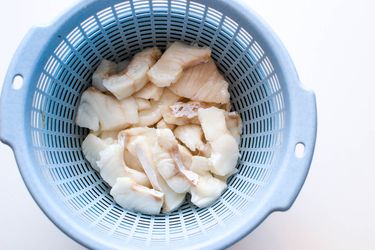 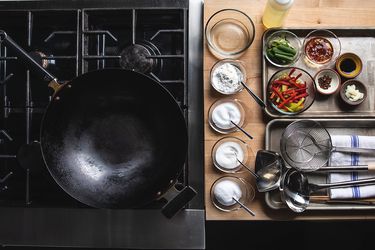