Ida Yu
Ida Yu is the program coordinator for Fresh Food Box at GrowNYC. She has spent much of her career working in farming and food sustainability.
Learn about Serious Eats' Editorial Process

The first time you walk into a Chinese bakery is a little like stepping into Willy Wonka's factory. Buns come with dozens of fillings. Cakes are stacked with cream and fruit and decorated with geometric frosting. There's little English signage; all you can tell is that everything seems to cost a dollar or less and the air has the intoxicating smell of eggs, butter, and sugar.

Even seasoned Chinese bakery pros can get overwhelmed; we certainly felt that way during our hunt for the best Chinese bakeries in Manhattan's Chinatown. Which is why we've put together this guide to the pastries available in America's Chinese bakeries.

What will you find? Buns of all kinds, baked and steamed. Eggy custard tarts with flaky lard crusts. The subtle sweetness of winter melon and lotus bean alongside the sugar shock of coconut and sweetened roast pork. Then there are the cakes—Western layer cakes stacked a foot high and puffy cupcake-shaped sponge cakes, light as air. Oh, and don't forget the chewy mochi.

The full rundown is below, but if there's one takeaway to get from this guide, it's this: visit Chinese bakeries in the morning for best results. Buns, sponge cakes, and egg custard tarts are at their peak while still warm.

The basic baked Chinese bun is a slightly sweetened bread made from soft wheat flour, water, and some combination of milk, egg, and fat (butter, shortening, or margarine) for texture and flavor. Fresh from the oven they're light, mildly sweet, and amazingly fluffy, and they're best eaten within a few hours of baking.

Chinese bakeries will use this basic bun for all manner of fillings and toppings. Some of the most common:

No actual pineapple here. Instead, bun dough is topped with a sweet paste of sugar, flour, eggs, and fat that turns burnished yellow and crackly in the oven for a pattern that looks a pineapple rind.

Red bean paste, made from adzuki beans boiled and mashed with sweetener, is one of the most common flavors in the Asian sweet pantheon, and it epitomizes the not-too-sweet nature of Chinese buns. Most of the bean paste stuffed into buns is a completely smooth purée, but if you're lucky you'll find a version with some real chunks of bean, which add a hearty texture and chew.

Coconut buns are usually split down the middle, filled with a salty-sweet cream made of shortening and sugar, and topped with some dried coconut. Eat these with care—the cream has a tendency to spurt everywhere.

Barbecue pork—char siu—gets chopped up fine and mixed with a gooey blend of oyster sauce, hoisin, soy sauce, sugar, and other ingredients. The bun is then topped with a sugar glaze before baking. This one really has to be eaten warm to get the most out of the pork fat and sweet sauces.

Chinese bakeries have a thing for hot dogs, and buns see them used in several forms. The classic hot dog bun is simply a whole (usually skinless) hot dog wrapped in a slightly sweet bread and baked. The key is the juxtaposition of a very lightly sweetened bread with a salty dog. You may also find hot dogs sliced and arranged in clover-shaped buns topped with scallions for a more sweet bun.

Some bakeries fill their baked buns with mashed taro (colored pale lavender) or ube (full-on purple). The sweet potato pastes have a light floral-vanilla character and not-too-heavy texture. As with red bean paste, taro paste with some more solid nubs gives great contrast. As with other baked buns, these come with a glossy egg wash.

The hallmark of a really great steamed bun is the simplicity of white, fluffy dough, often made with bleached wheat flour for extra purity. Used for sweet and savory fillings, the dough has less sugar and fat than baked versions. Steamed buns should be light, never dense or chewy, and moist but not mushy or soggy. They are by far the best when they're fresh from the steamer, but you can always reheat them in the microwave covered with a damp napkin if you need to.

You'll find some of the above fillings, like red bean and roast pork, in steamed buns, along with others like these:

Although pumpkin sweets usually bring to mind classic fall spices (cinnamon, nutmeg, cloves), these buns should taste only of squash with a little sugar.

Sweet, nutty and rich, lotus bean paste almost brings to mind peanut butter but without the cloying stickiness. The paste is a classic filling in mooncakes, where it's kept dense and sliceable, but when used in bun filling, it's looser and less gummy.

Cured, salted duck or chicken egg yolks have a rich, gritty salty-sweet custard character, and for bun filling they're blended with sugar and canned milk (evaporated, condensed, or coconut milk) to make a full-on custard that's then baked inside buns. Bite into one and the filling spills out like the inside of a molten chocolate cake.

Steamed buns are filled with all manner of meats and vegetables: pork, bean sprouts, cabbage, celery, and water chestnuts are just a few options you might find at a sweets-focused Chinese bakery.

Western sponge cakes are fluffy, eggy, and moist without being greasy. Chinese versions are even more so—airier than angel food and barely sweet. An oval boat shape, wrapped in paper, is traditional, but many bakeries go for the oversized cupcake shape instead.

Unlike steamed and baked buns, sponge cakes hold their own well into the day. Though a fresh-from-the-oven cake is definitely the way to go if you can, a mid-afternoon sponge cake should still taste light and fresh.

"Swiss" rolls, also called roll cakes, are close sponge cake relatives with some key differences. The cake is more dense, baked in a flat sheet then rolled around a sweet filling. The "cream" filling has a base of whipped shortening, sugar, and traditionally some salt—enough to register as slightly salty on the tongue.

Bakeries vary on both the saltiness of their fillings and the flavor of their cakes. While plain eggy is the standard, cakes also come in chocolate, coffee, mango, and green tea variations. Try finding that in a typical Swiss roll.

Egg custard baked into single-serving tart shells reached Hong Kong by way of Macau, the nearby Portuguese colony. Hong Kong bakers transformed the creamy pastel de nata into the dense dan tat by upping the egg yolks and lowering the dairy and sugar. A dan tat's filling should be silky smooth with a slightly wiggly, creamy, rich (but not too rich) texture and a strong eggy flavor, balanced out by moderate sweetness. And the tart shell (often made with lard) should be flaky and light.

Chinese bakeries also offer Hong Kong's take on the Portuguese original, fittingly described as Portuguese egg custard tarts. They share the flaky crust but have a smoother, lighter filling and a broiled crust like crème brûlée. The custard here should be sweet and mildly eggy with a vanilla kick.

There are plenty of egg custard tart variations. Some bakeries also offer a "milk tart," a tart shell filled with a custard made from egg whites. It's dense and wobbly like a dan tat but even more so, with a mild panna cotta-like flavor. Also look out for versions festooned with shredded coconut, chunks of mango, or tapioca pearls.

An archetypical Chinese sweet: light on sugar but big on chewy texture. This cookie-shaped cake is filled with a subtle, sticky-chewy winter melon filling that has a taste and texture reminiscent of mashed sticky rice with some notes of sweet summer squash. Traditionally, the flaky pastry surrounding the filling is made with lard, but some bakeries have switched it out for shortening or butter, which we frankly prefer for a less...porky cake. Another variation we can get behind? The addition of sesame seeds to the filling, which contributes nuttiness and the tiniest bit of crunch.

Generally a seasonal pastry (they appear around September for the Mid-Autumn Festival), these cakes have a very thin layer of soft (read: fatty) pastry surrounding an inch-thick slab filling. The cakes are pressed into intricate molds for a beautiful patterned stamp topping.

That filling is usually sticky but sliceable lotus or red bean paste, sometimes with egg yolks in the center, but nut and fruit versions are popular, too. Mooncakes are made for sharing—these things are dense, and eating one by yourself may kill your appetite for hours.

A finicky treat for a bakery to master, and definitely worth eating fresh from the fryer. At their best, they have a crispy exterior that tastes of sesame seeds (not fryer oil), a chewy layer of glutinous rice dough, and a well-filled core of red bean paste. Look for shapely spheres that aren't saggy or sitting in pools of oil. They should be plump and golden, covered evenly with sesame seeds. If you can, find out when they were made. If they're more than a couple hours old, just come back later for a fresh batch.

Mochi (borrowed from Japanese cuisine) come in a myriad of different flavors, but at their most basic, they're balls of soft sticky-rice dough filled with something sweet and usually rolled in coconut or finely crushed peanuts. To name a few variations, we've seen taro, mango, green tea, peanut, black sesame, and red bean. Even if you aren't a fan of coconut, don't be afraid to give these a try: the taste of the coconut coating is faint at best.

These fried noodle cakes are more common in grocery stores than bakeries, where you may have seen them stacked up and wrapped in plastic. The label says something like "soft flour cake," but in truth most pre-packaged ones I've sampled from groceriesare hard, crusty, and stale.

At a bakery, though, they're likely to be more fresh. Sachima are made from fried noodles bound with a sticky syrup, then sometimes mixed with sesame seeds and/or raisins. At best, they're light and sweet with a delicate "fried" aroma, and unlike buns, though, they can stay fresh for days. But beware bakeries with unskilled fryers; a greasy sachima isn't worth eating.

Do you have a go-to Chinese pastry or did we leave out your favorite? Let us know in the comments. 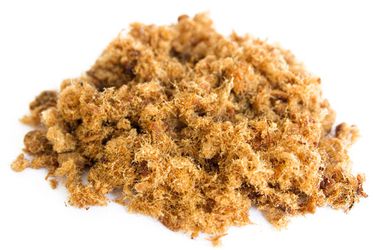