It's silky, smooth, and perfect for a holiday gathering.

Once that's all set, I transfer everything to a food processor with some butter and turn it into a smooth purée. The last step—pushing the pâté through a fine-mesh strainer—is admittedly a little tedious, but I swear it's worth it for the extra silky texture you'll get.

Once the pâté is ready, I transfer it to a large ramekin or terrine and smooth the surface, then pour the cranberry juice, which has just enough gelatin to set it, on top. The gelée acts as a barrier to air, which prevents the pâté from discoloring and also helps it keep for several days in the refrigerator. Just be sure to give it time to soften a little at room temperature before serving.

You can use sweetened cranberry juice, but if you do, omit the sugar. 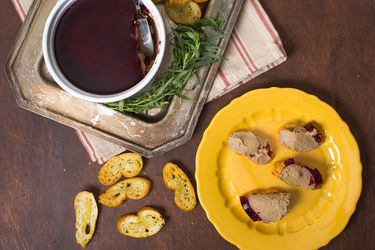