Spaghetti and meatballs is a recipe that one just doesn't associate with chicken. Red meats dominate this simple Italian dish, with their hearty flavor and moist, fatty texture. I'd never thought swapping in chicken meat could provide an agreeable alternative—until this week. As I found out, chicken is not only a wonderful alternative, but its lighter characteristics succeed at elevating a simple, rustic dish like spaghetti and meatballs into something a bit more refined.

But that isn't to say that chicken is without problems. By swapping in chicken, you sacrifice both flavor and texture. Chicken is vey mild compared to beef, and because it's more lean, chicken meatballs tends to be dry. Packing ground chicken into meatballs can also result in a pasty texture. I decided to tackle both of these problems (and give myself an excuse to eat a ton of meatballs) by mixing up a few batches of meatballs using a favorite beef meatball recipe and frying up some rounds of meatball tests.

Pack it with Panade

Don't ever hand me a burger with a panade (just tell me it's meatloaf and I'll be just fine). Panade is a mixture of bread and liquid (usually water, milk, or broth) that moistens meatloaf and meatballs, and keeps them from falling apart. Often, an egg is tossed in as well. This was an easy test, as the panade-less packed balls of chicken meat came out as expected: hard, dry and pasty. A panaded chicken meatball is a happy meatball—pleasantly soft and tender. And since the chicken is mild anyway, the panade really doesn't water down the flavor as it can do with beef.

Going for the Gelatin

Ever since we started sprinkling gelatin into meat dishes like stews at Cook's Illustrated, I pull out this kitchen trick whenever I can. Used sparingly, gelatin boosts the slick mouthfeel of collagen, a protein found in connective tissue. When slowly cooked, the collagen melts into a velvety texture. In chicken meatballs, a few teaspoons of melted gelatin stirred into the mix works to mimic the gelatin-y, lubricating texture that you get from the extra cartilage in red meats. Combined with the panade, the gelatin helps to shape up ground chicken into an incredibly tender and moist texture.

To Brown or Not to Brown

Whether on the stovetop or in the oven, I've always browned my meatballs before cooking them in sauce. Especially with chicken's milder flavor, I naturally assumed that the crispy browned caramelization would improve the flavor. After wrestling with a splattering batch of soft meatballs sticking to the skillet, I dropped the remaining raw meatballs into the bubbling tomato sauce. Surprisingly, the un-browned meatballs were even more tender and flavorful. Browning dries out the outer shell of the meatball, making it tough and unable to soak up adequate flavor from the sauce. Plus, unlike beef, which can become softer and more flavorful after a long cook in the sauce, chicken meatballs are best with a brief, gentle cook. For optimum texture, simmer gently just until cooked through (160°F).

When working with chicken, I often try to beat it into submission when substituting it into a dish normally associated with beef. I flavor the heck out of it with everything umami in an attempt to turn it into a mock red meat. This time I allowed the chicken to just hang out and be mellow. Fresh aromatic herbs of parsley and basil, along with a handful of Parmesan, are all that's needed here. For the sauce, a thick, all-day simmered pot would simply overwhelm the chicken. Instead, a quickly cooked sauce with chopped basil keeps the whole dish lighter and fresher. Chicken meatballs are a surprisingly delicious variation on the old classic. 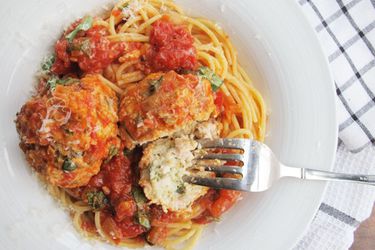