I poke fun at my experience of working for Red Lobster, but I'll admit they had a rocking gumbo soup. I ate as much of it as I could—and by that I mean a hell of a lot. Sure, it was soup out of a bag, but it was delicious, particularly the last gunky bits at the bottom of the pot that had been sitting on a soup warmer all night. I especially loved to plop the little pre-portioned cups of rice on top.

Gumbo is a classic soup from Louisiana. Rich, hearty, and spicy, it's thickened from either a roux, okra, filé powder, or a combination of the three. The veggie base starts with sautéed onion, celery, and bell pepper (known as the "holy trinity"), and usual flavorings include cajun seasoning, shellfish, poultry, and smoky andouille sausage. It's commonly served with rice.

Cooking gumbo at home has always been a weekend project for me, the weekend being the only time I have ample time to devote to it. To make gumbo right, you thicken it with a roux, a cooked mixture of flour and fat (usually oil). As the flour and fat cook, the Maillard reaction takes place, transforming an ordinary flour thickener into a wonderfully nutty pot of gold. The deep, rich flavor of gumbo relies in part on a roux that's been slowly cooked on the stove until it turns a dark brown, a process that takes about 15 to 20 minutes. For my chicken gumbo to be full-flavored but still weeknight meal-worthy, I would have to figure out a way to shave off some time.

To do that, I decided to try out a method for cooking the roux in a microwave. The method claimed that a good, dark roux could be achieved in under 10 minutes. Really? Yup. After about eight minutes, stirring every few minutes, I ended up with a roux that had indeed toasted up to a proper chocolate brown color.

Speaking of color, it's tricky. Just like when making caramel, to get the most flavorful roux you want it to get good and dark—which is just a few hairs away from being scorched. Of the two roux colors above, I went with the one on the left. The one on the right is still nutty but just beginning to taste charred.

Though it's common to use oil, I knew that butter would make for a nuttier, browned butter taste. Due diligence with a side by side taste test proved my instinct correct.

Though I saved some time with a microwave roux, I wanted the dish to go even more quickly. To do that, I sautéed the vegetables while the roux was in the microwave. By the time the veggies were set for the next step, the roux was ready and waiting. I added beer and chicken stock to deepen the gumbo's flavor, okra to help thicken it, and smoky paprika to mimic the smoky flavor of andouille. Pieces of dark meat chicken (boneless chicken thighs) were the perfect choice here, with dark meat's richer flavor and moist texture.

From start to finish, this gumbo is ready in under an hour, no longer relegated to a lazy Sunday afternoon. 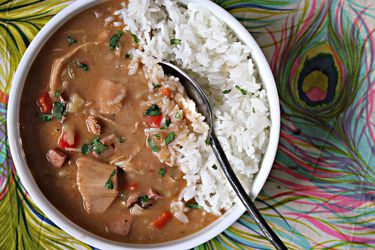 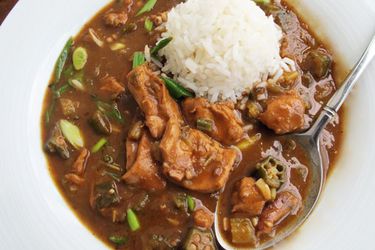