I won't forget the time I bought my first serious wok as soon as I moved to Singapore. My husband and I walked over to Chinatown and into a restaurant supply shop. In the back was a tiny room filled to the brim with woks of various shapes and sizes. We picked out the one we wanted, but as we made our way to the register, one of the employees (an older Chinese woman) stopped us and told us sternly that we shouldn't buy that wok because we would definitely not like it.

"Because food will stick to it," she replied.

I realized she assumed that we probably had no idea a wok needed to be seasoned, and she was trying to send us off to Ikea or something to buy what she thought would have suited expats like us instead—a nonstick pan (I guess she's been burned by expats trying to return "faulty" woks). I just said, "Okay, thanks!" and bought my wok.

I cook with my wok about once or twice a week, though I really should do it more often, as the wok burner makes it so easy.

This week I was looking for a noodle-y and all-in-one kind of a dish, and glass noodles came to mind. Glass noodles, cellophane, or bean thread noodles are unique, transparent, chewy noodles made from water and starch, such as mung bean, potato, yam, or cassava (the ones I bought were sweet potato). Though I usually slurp up these slippery noodles smothered in mouth-burning chile sauce at my favorite Sichuan place, I decided to make a more subdued but full flavored meal with them. Gaining inspiration from a Chinese recipe in David Thompson's Thai Street Food, I added chicken and tweaked a few ingredients to create this quick, easy, and delicious dinner. Ground chicken is marinated in Shaoxing wine and ginger, then stir fried with garlic, chilies, shiitake and oyster mushrooms, crunchy celery, and cilantro. After soaking in water, the noodles are tossed in the wok at the end, cooking, softening, and soaking up every bit of the tasty sauce. 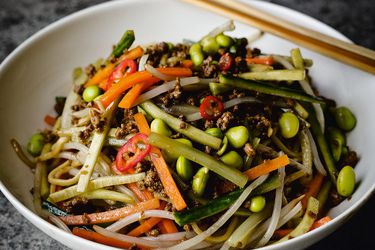