I don't make risotto often. I usually let my husband do it, as he's keen to stand by the stove and slowly stir the grains of rice to their tender and creamy luxuriousness. Unfortunately, my husband is not a big fan of most things chicken, so when I suggested a chicken risotto using the nice Kampong chicken that I'd just purchased, I got his "ew" face and told that I was on my own. So be it.

I knew from the start that I was going to do it the long way, and I would try to get as much flavor from the chicken as possible. That meant starting with a homemade stock. I simmered the chicken for about an hour, until the meat was tender and falling off the bone. Next, I briefly simmered the veggies in the same broth until just cooked and still crisp. The broth that was left over, chicken-y and flavored from the asparagus and peas, would be the liquid for the risotto.

Arborio rice, the classic short grain rice used for risotto, is tough to find in my hood, so I made this work with medium grained Calrose (sushi rice should also work). A good risotto is not something to be rushed, as far as I know, as the careful and continuous stirring and adding of liquid in stages gently releases the starches from the rice as it cooks. I got myself a beer and turned on NPR. The risotto took about 45 minutes for my batch, but I would guess that other varieties of rice would differ in their exact times. Just keep stirring and adding liquid until the grains are just tender and the consistency of the dish is creamy. At the end of cooking, toss the rest of the ingredients in (don't forget the cheese!) and savor all of your hard work. 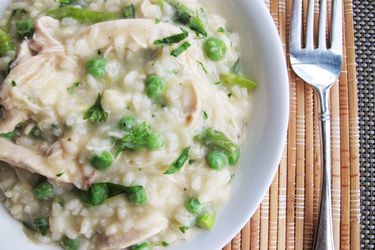