A simple, creamy pasta dish is upgraded with chicken and Parmesan-crusted garlic bread for a hearty and satisfying meal.

I'm not a seasonal eater at all. I'll eat anything, any time of year. But when it's freezing outside, a meal of pasta in a creamy sauce does go down especially easily (and rapidly). There is not one creamy pasta that I'll ever refuse, including pasta in vodka cream sauce.

The sauce's mild color may fool you into thinking it's a vapid sauce, but it's not. It's a vibrant mix of sautéed garlic, shallots (or onions), tomatoes, and vodka, tempered with cream and blended until satiny smooth (it doesn't have to be blended, but I like how the silky sauce clings onto the pasta). This Italian-American sauce is usually tossed with penne, but I'd be happy to mix it with any shape that's got a lot of nooks and crannies (wagon wheels would be killer). Vodka sauce is mostly served with pasta and no other adornment, but I thought I'd make a heartier meal of it by stirring in slices of boneless chicken breast.

This is an extremely simple pasta sauce to prepare, making it ideal for a hearty weeknight dinner. For inspiration for my sauce, I looked to Daniel's penne alla vodka recipe for inspiration. According to Kenji, vodka "[alters] the flavor of the sauce in a pleasing way. It adds a touch of heat and a bit of a sharp bite that help balance out the sweetness of the tomatoes and the cream." Sounds good to me.

I figured the best way to get the chicken in there was to gently cook it in the completed sauce. I thinly sliced boneless chicken breast against the grain so that it would cook quickly and stay tender. Probably the best part about this dish is that it gives me a good excuse to whip up cheesy garlic bread drenched in butter.

For the Garlic Parmesan Toast:

The garlic bread can also be prepared as you are boiling the pasta in Step 6. 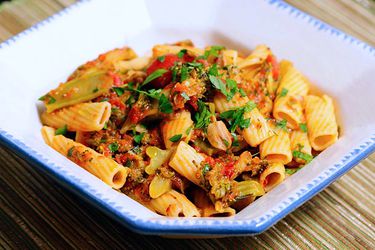 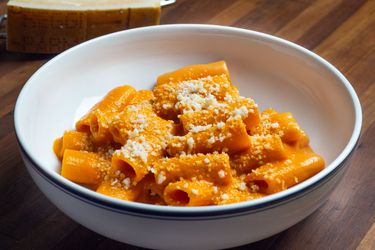 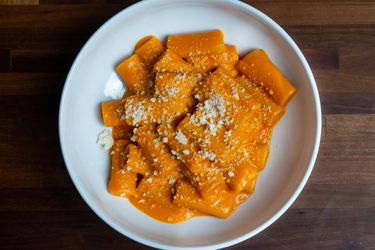 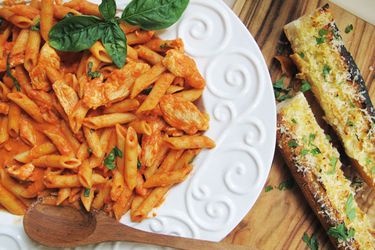 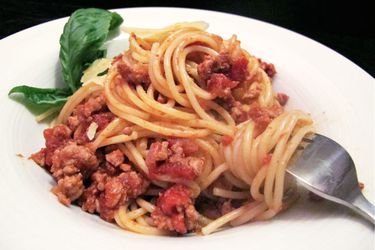 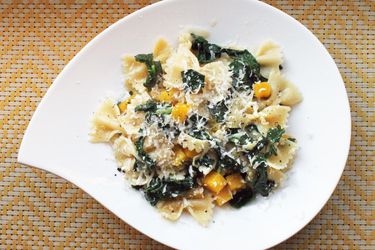