The past couple of weeks, I've been on the hunt for Super Bowl-friendly sauces. But after making a green chili queso a couple weeks back, I've been able to think of nothing other than cheese dips. So when Kenji asked if I'd like to do pull together five more quesos, I jumped at the opportunity.

Just keep in mind that while this may be my 2014 queso line-up, there are another 14 easy variations I slapped together last year.

My very first dip idea also may have also been my best: taco queso! Taco night is a tradition in my house, and I imagined taking that same well-seasoned, spicy ground beef and mixing it with a combo of cheddar and monterey jack, along with some sour cream for good measure. This queso has a robustness from earthy cumin and chili powder, spicy jalapeños and salsa, sautéed onions, garlic, and, of course, beef chuck. It really gives the sensation of eating a taco in dip form, and how can you go wrong with that?

Next up was this French onion cheese dip, which combines the main components of the soup and just subtracts the stock. I mix two large, well-caramelized onions with a combination of Gruyère and Swiss cheeses, a dash of WOrcestershire sauce, and a hefty dose of thyme. The result is a dip that's markedly thicker than the others (it can be thinned with additional evaporated milk if desired) and delivers the deep sweetness of the onions, nicely balanced by the sharp Gruyère—a surprisingly accurate evocation of the classic dish.

My two dips were both on the labor-intensive side, so I decided to go simple for my next recipe. This dip is little more than our standard cheddar cheese dip with mayo, a little sour cream, and pimentos mixed in. I think you get a lot more flavor out of your red peppers if you roast, peel, and chop fresh ones at home like I did here, but you can certainly substitute jarred pimentos to make this sauce even easier to put together. So far, pimento cheese hasn't failed me in mac and cheese, baked potatoes, or grilled cheese, and this dip just adds to the list of successful takes on the Southern spread.

I had a grand vision of a rich Italian dip that would burst with the flavor of fresh herbs against a creamy and slightly nutty cheese base. My dreams were brought down a notch or two when my wife said this dip tasted like it was better suited for a baby shower than a Super Bowl party. So it wasn't the super-intense herbal dip I originally set out to make, but this mixture of mozzarella, fontina, and Parmesan with basil, oregano, thyme, rosemary, garlic, and lemon zest still has its charms. It may be more subtle than the rest, but maybe that's your thing (or maybe you're killing two birds with one stone and doing a baby/football party mashup, in which case, I say this dip is for you!).

From the outset, I really wanted to do a chorizo-laden queso, and decided to try out a classic pairing of chorizo and mushrooms. I sautéed a couple links of chorizo—removed from their casings—and then sautéed mushrooms and onion in the bright red rendered fat. I've been on a bit of shiitake kick lately, so I used those in my recipe, but more common and less expensive creminis would work just as well. I took some inspiration from queso fundido and used Oaxacan cheese as the base here, with a little monterey jack mixed in. The result is a queso that's salty, spicy, earthy, and meaty, with a fun stringiness thanks to the Oaxacan cheese (the sauce became more dippable and less stringy the longer it cooked, so it required a little extra time on the stove to get the texture just right).

I was slated to do five dips, but there was one idea that haunted my thoughts and I simply couldn't resist: Philly Cheesesteak dip. I originally wrote it off because it wasn't much of a recipe—just steak, onions, and Cheez Whiz—but once I made it, I knew it deserved some airtime. Ideally, I would have used thinly sliced ribeye for the best beefy flavor, but not finding that on my shopping day and with the butcher closed, I decided to keep the processed food thing going and picked up a box of Steak-umm to at least let me prove the concept. The "steak" was browned, then the onions were cooked in the rendered fat of the beef. Both were then combined with a whole bottle of Cheez Whiz and heated until dippable. What can I say, it was like a cheesesteak with way too much Whiz, and that's not a bad thing. 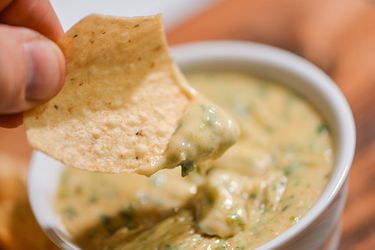 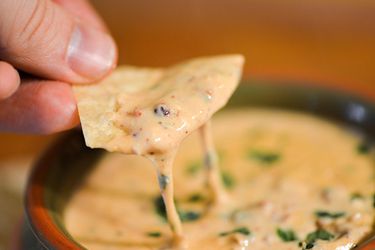