While we think mom-and-pop shops make the best pizza in the nation, we'd be remiss if we didn't keep abreast of what the chains are up to. Suit up, it's time for another Serious Eats "Chain Reaction" review, folks.

This was going to be an epically thorough taste test comparing the thin crust varieties from all four of the largest pizza chains in the nation (those'd be Little Caesars, Pizza Hut, Papa John's and Domino's). In the realm of pizza styles, the thin crust versions from the big chains most resemble bar pies, though in reality, they are a beast unto themselves.

And unfortunately, we were hit with a few snags along the way.

Apparently not a single Pizza Hut in Manhattan makes the thin crust variety mentioned on their website. Believe me, I called all of them to find that five are permanently closed, one is permanently a Pizza Hut Express and thus only serves personal pizzas and tacos, and that the other two are permanently confused about what "thin crust" means.

No matter, I thought. We've still got a solid three contenders. There are three operating Little Caesar's restaurants in Manhattan. One is way up in Washington Heights where thin crust doesn't exist. Two of them are within walking distance of my apartment on 125th street. Of those, one has a listed phone number that connects you to a modem screech. The other has a phone that works, but an employee that doesn't. We had a conversation that went something like this:

[ringa ringa] Him: "Little Caesars" Me: "Hi, yes—do you carry thin crust pizzas?" Him: [pause] "ok" Me: [slightly confused] "I'm sorry, so you do make thin crust in addition to your regular crust?" Him: "Why are you asking? Who is this... this is Kenji Alt? Don't call again." [clicka clicka]

I'm assuming he got my name through caller ID. It's a sad day in your life indeed when you realize that not even the pizza delivery guy wants to talk to you.

So this time, alls we're gonna do is tell you whether we liked the Domino's or the Papa John's thin crust pizzas better. Ok? After Little Caesar's and Pizza Huts disastrous showings in our Delivery Pepperoni Pizza Taste Test, we figured there's a good chance we're not missing anything anyway.

On to the results

Domino's: "Robust Inspired Tomato Sauce" is thankfully not outlandishly sweet, though it still lacks any kind of freshness. It tastes mostly of dried herbs with a tiny bit of spicy kick. Nothing spectacular, but charming in a "I remember when this nursed me through a hangover" kind of way.

Papa John's: Whoah, sugar! Holy mother of pizza is that some sweet s*$t. It has an almost candy-like sweetness with a distinct flavor that Erin identified as cheap red wine vinegar. She's spot on there. It might not be in the ingredients, but that's what this pie tasted like.

Domino's: The cheese had decent flavor. Tangy, with a flavor that actually tasted like real mozzarella. The problem here was the baking. It was just too cooked for our liking, coming out a bit leathery and completely browned rather than creamy and milky.

Papa John's: Not quite as tangy or flavorful, but cooked closer to our ideal. Papa John's is also pretty heavy handed with the cheese, topping the pie with a layer that's pretty much as thick as the crust. When it's hot, that means gooey. Let it cool for even a couple minutes, and it congeals into rubber.

Domino's: As advertised, Domino's thin crust is ultra-thin, as in, it could pass for a piece of matzoh. Unlike what we'd think of as a normal "thin crust" pizza, the crust here is more flaky than bread-like. It shatters into shards that are actually quite tasty in their own way. We dig the square-shaped party cut, and the fact that despite its thinness, each slice was crisp enough that it easily supported its own weight.

Papa John's: Actually pretty similar to the Domino's crust, though it wasn't quite as thin or crispy. It maintained the slightest amount of doughy chew in its very center. The base was nicely browned and crisp.

Despite Papa John's having a superior crust and better cheese, Domino's still takes it. The flavor of the Papa John's sauce just destroys any chance it had of the title. While Papa John's might be a bit more substantial, Domino's simply tastes better. We could easily see ourselves scarf down a pie or two during a game (they're so thin that they go down real easy), while the overwhelming sweetness and off-flavors in the Papa John's pie made us want to quit before we even got through our first slice.

Or better yet, just make your own awesome thin crust bar style pizza at home. 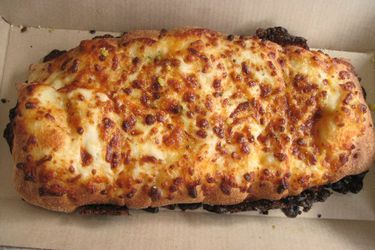