WARNING: THOSE WITH GLUTEN INTOLERANCE MAY EXPERIENCE ABDOMINAL DISCOMFORT BY READING THIS POST.

You have been warned.

Look at that. I mean, just look at that picture above. Awe-inspiring? Perhaps. A little frightening? Certainly. Gluten-free and Atkin's friendly? Not on your life.

What you are staring at there is the Italian sausage variation of Domino's Bread Bowl Pasta. Introduced back in 2009 with the tagline "pasta so good you'll devour the bowl," it comes in four flavors—Chicken Alfredo, Italian Sausage Marinara, Chicken Carbonara, Pasta Primavera—with the option to build your own by adding ingredients from their pizza toppings lineup.

For the purpose of this taste test, your intrepid writer decided to order both versions.

The non-bread bowl version comes in a foil tray with a completely non-sensical pun on the lid.

"A penne saved is a penne earned?" Seriously, Domino's?

Pulling back the lid on the Pasta Primavera version revealed a reasonably sized portion of penne pasta (the only shape available), topped with a smattering of vegetables. I'm not sure what spinach, diced tomatoes, sliced onions, and sliced mushrooms have to do with primavera, but that's what we got here.

The pasta was impressively al dente, still retaining a decent bite. A good step up from the steam-table pasta at neighborhood pizza joints. Similarly, the alfredo sauce was about as good as one could reasonably expect chain pizza-delivered alfredo sauce to be. That is, very edible, slightly goopy, with a flavor that tasted predominantly of garlic powder and green-can cheese.

The only real complaint here was with the mushrooms, which despite being advertised as fresh, looked smashed and tasted like slightly used kitchen sponges. Thankfully, there were only four slices of mushroom in the whole dish.

The breadbowl version was, unsurprisingly, far less successful. Conceptually, the dish is a mess—the product, no doubt, of a boardroom meeting which consisted of asking "how can we make a new product using only ingredients that are already in the store and that require no new equipment, nor special training?"

"I know, let's just half-stretch a ball of pizza dough, press a hole in the center, throw in some pasta, bake it, and call it a day!"

And it shows. The dough—that spongy, bland, overly sweet dough—is clearly the weakest link in the quality of Domino's pizza. I don't like it when it's stretched thin for a pizza, why the heck would I like it when it's left thick and gummy?

Conceptually, the idea of sticking already-cooked-and-sauced pasta in a raw disk of dough and baking the whole thing together is a bad one. While you do end up with a few nice pieces of crunchy, browned pasta around the edges and top of the bowl, the pasta under the surface suffers a far worse fate.

In the time it takes the bread bowl to cook, the pasta ends up absorbing way too much sauce. The result is pasta that's simultaneously mushy and dry, like baked ziti that has been sitting out a day too long. Their marinara sauce doesn't improve matters, with its crazy sweet flavor and aroma of dried herbs and garlic powder.

But is having too little of a bad thing really bad news after all? 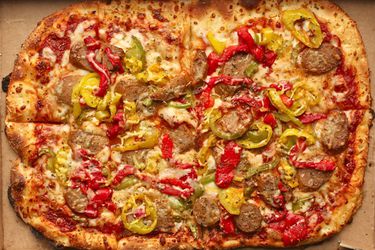