Imagine if some former Nickelodeon executive was to sift back through the vaults of TV history and say to himself, "We're going to make a show where Uncle Jesse and Launchpad McQuack drive around in Kit from Knight Rider, MacGyvering themselves weapons to battle the evil forces of He-Man and Orko and their sidekick Dave Coulier (from his You Can't Do That On Television years, not his Full House years). Each week will feature a special guest star drawn from the cast of Super Friends." Your first thought might be wow, that's a lot of awesome to try to fit into one single show, but if you're anything like me, that thought will be rapidly supplanted by a second: holy crap, that's a whole lot of awesome in one show!

Caponata, the Sicilian dish of eggplant and other vegetables sautéed in a sweet-and-sour sauce, is kind of like that. Packed with extra-virgin olive oil, raisins, pine nuts, herbs, vinegar, sugar, and a slew of other ingredients, it can be shockingly flavorful the first time you try it. And I'm not using the word shockingly lightly here. It's the kind of dish you have to recalibrate your whole mouth for in order to really appreciate. But once that recalibration is done, man oh man is it great stuff.

My wife and I took a trip to Sicily a couple of years ago and if you've never been, let me tell you: It's absolutely nothing like the rest of Italy. Sure, they speak Italian (albeit with heavy accents and alongside their local dialects), but the food, the culture, and the people are entirely different. (Not to mention the driving—driving a car down the narrow streets of Palermo or Catania makes weaving through the motorbikers on Bali seem like a stroll down a wide Paris avenue). Sicily's culinary history is wildly diverse. Arab rule in the 10th century brought sweet dried fruits, nuts, and warm spices to savory dishes. The Spanish brought New World ingredients like chocolate and peppers. The Greeks and North Africans have left their mark on the cuisine. The climate itself makes it ideal for growing tomatoes, eggplants, and olives (and you find those ingredients everywhere).

And all of these things find their way into caponata. Is it an appetizer? A side dish? A pasta sauce? A meal unto itself? The answer is yes: It's all of these things at one time or another, though I feel that depending on how you intend to serve it, the flavor ought to vary a little bit. The kind of flavor overload I'd want as a few bites on top of a nice piece of garlic-rubbed bruschetta would get fatiguing as an entire main course-sized portion (and generally I personally prefer to serve it as the former).

"For caponata, the eggplant pieces are cut small enough that their increased surface area helps them cook down much faster than larger wedges or slices of eggplant could."

Earlier this week I wrote about Sichuan-Style Eggplant with Hot and Sour Sauce. In that recipe, I brine the eggplant first, which helps remove some of its excess moisture and delivers a more tender end product when sautéing. I figured I'd test out the same technique for my caponata recipe, but it ended up proving to be unnecessary; For caponata, the eggplant pieces are cut small enough that their increased surface area helps them cook down much faster than larger wedges or slices of eggplant could.

This is good news for you: It makes the dish incredibly simple. I start by sautéing eggplant in extra-virgin olive oil heated in a cast iron or non-stick skillet. As soon as it's mostly softened and nicely browned, I push it to the side of the skillet, add more oil, then drop in some scallions (I prefer their finished texture over that of chopped onions), bell peppers, celery, and thinly sliced garlic, sautéing them and tossing them together with the eggplant until tenderized.

Some recipes recommend adding raw pine nuts directly to the skillet, toasting them through contact with the bottom of the hot pan. I find that you get better flavor and toasting by performing the act separately. I toast my pine nuts in the microwave to speed up the process.

Now it's time to start layering on the other flavors: Chopped mint and parsley go into the pan (I also reserve some for sprinkling on top later), along with cinnamon, capers, and raisins. (I don't dig the cocoa powder that some recipes call for.) Though caponata is emphatically not a tomato sauce, a dollop of tomato paste adds richness and thickens up the sauce that binds the whole thing together.

Finally, we add the sweet and sour elements: sugar and vinegar. Some people use straight up red wine vinegar, which is probably more authentic. I prefer to use a mix of red wine and balsamic vinegar for its milder tang and woody aromas. (I'm talking the not-too-pricey balsamic you mix into vinaigrettes, not the extra-fancy stuff you drizzle on grilled meat.) Season your caponata with salt and pepper, dump it onto a plate, drizzle with more olive oil (you can't ever put too much olive oil into a Sicilian dish), garnish with some mint and parsley, and you've got yourself a pretty darn good excuse to leave that canned pesto or antipasti sitting on the supermarket shelf.

Now, if only we could figure out how to get that awesome TV show made with just 30 minutes and a skillet and we'd be all set. 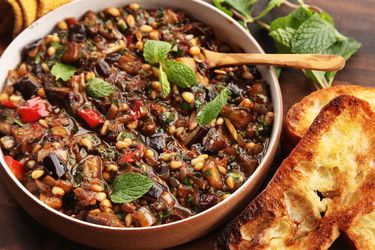 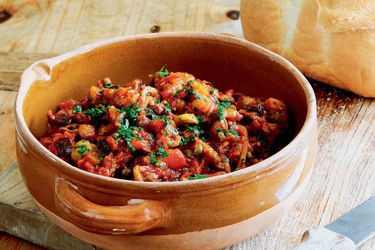 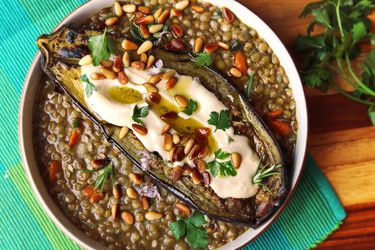 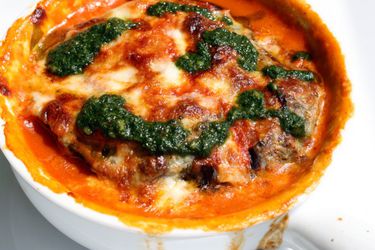 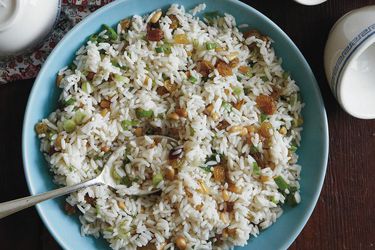 Carolina Gold Rice Salad from 'Around the Southern Table'