"These morsels of skin and bones are a unique combination of textures--the wrinkled, puffed skin on the surface and the soft, gelatinous tendons within."

It's been months since my last dim sum meal. The commingling smells of pork ribs with black bean sauce, egg custard tarts, and sweet ginger tofu linger in my memory. Most of all, I miss the chicken feet. These morsels of skin and bones are a unique combination of textures: the wrinkled, puffed up skin on the surface and the soft, gelatinous tendons within. In dim sum restaurants across the country, chicken feet are a staple—always reliably good and due to their humble beginnings, always cheap.

I'm fond of all poultry feet. Goose and duck feet have ample amounts of webbing; when stewed, they are delicate and tender with a hint of chewiness that resembles the texture of simmered sheets of bean curd. While goose and duck feet are more prized in Chinese cuisine, I prefer the meatiness of a chicken's foot. In restaurants, I've always wondered why the feet (and the meat in pork buns, for that matter) are a hue of red like the lacquer of Chinese wooden furniture. Still, the showy color of the chicken feet mirrors the feel of a dim sum meal: flamboyant and pleasurably excessive.

Dim sum is nothing if not indulgent. Is it right to eat chicken feet alongside fried durian buns, or morsels of shrimp dumplings in the same sitting as ginger custard tarts? The diversity of the selections is awe-inspiring, but often a dim sum meal leaves one feeling enervated, as if the palate has been subjected to one too many flavors in a gauntlet of Cantonese temptations. It's culinary overload, and it's not entirely unpleasant, either. But there's something to be said for simple, thematic meals in which each offering has been carefully considered with respect to the next, so that the meal unfolds like a good novel with a cohesive story to tell.

In a way, a dim sum meal does tell a tale, and it is the collective story of the Chinese immigrants who run the restaurant. It's a narrative of taking the opportunities life presents to you and holding on to them no matter what. Only in dim sum restaurants is it acceptable to doggedly chase down an employee, stalking him or her until you get the dish of your heart's desire. Perhaps it is the tofu lady who's been ignoring your persistent flagging in pursuit of a larger company of diners, or the waiter who hasn't filled your teapot in the past half hour. Absent are the normal social conventions governing restaurant behavior, and in their place, a set of street-smart rules that facilitate a smoother experience. At some restaurants, it is entirely acceptable to gently shove your way to the hostess's desk in order to get a ticket. Other people will be shoving you back, and if you're willy-nilly about the process, you may cost yourself an extra twenty to forty minutes of waiting.

But if, like me, you've tired of all the waiting and the shoving, why not try a few dim sum dishes at home? Chicken feet, though time-consuming, are an entertaining dish to cook in your own kitchen. More so than other dim sum staples, working with chicken feet can demonstrate the skill and patience required to transform a raw ingredient into something palatable.

The feet come with their claws intact. Clipping the sharp toenails may seem daunting, but a pair of kitchen shears makes quick work of the task. Still, this step is perhaps the most off-putting part of the process. White and sometimes curled over, the feet would look very much like tiny human hands if there were five instead of four toes.

As a child, I was always slightly frightened of the raw chicken feet my mother would bring home from the market, but any squeamishness was soon forgotten as I chewed on foot after foot. Chicken feet are the pinnacle of gnawing for pleasure and the Chinese people, paramount gnawers. If I were to generalize, I'd say that half of what goes into the mouth of a Chinese diner comes right back out. Little bones, cartilage, centers of eyeballs, and other delicate treats are eaten and then returned with great relish. Happily, when I cook chicken feet at home, I can really gnaw to my heart's content.

Following a proper shearing, the chicken feet must be deep-fried for several minutes. Doing so can be treacherous if the feet aren't impeccably dry. The minute the chicken feet enter the pot, the hot oil will begin to sputter and growl like some form of primordial lava, engulfing the feet until all you can see are the bubbles of the oil. After frying, the feet are dunked into an ice bath in order to puff up the skin, which will have become swollen and wrinkled in the oil. Every time I cook this dish, the dunking of the feet in the ice water signals that the hard part is over: afterwards, all that is needed is a simmering in water and ginger, followed by a marinade that takes five minutes to throw together.

The feet, when steamed in their marinade of black bean paste, oyster sauce, chili peppers, and soy sauce, are sweet and savory with a little heat in the finish. If you have fermented black beans on hand, a quick smashing in the mortar and pestle will render a paste that's far better than what you can buy in a jar. Nevertheless, a good-quality jar of fermented black bean sauce will provide the primary backdrop to the chicken feet. Jalapeño are often marinated and steamed alongside the chicken feet, but dried red chili peppers work too. Serve the feet with rice that will sop up the juices of the marinade, to a group of appreciative fellow gnawers. 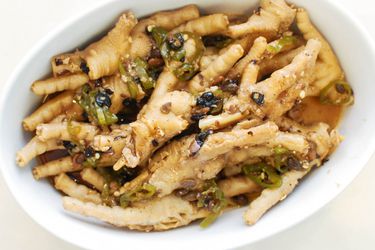