One bowl, no fuss

Stella Parks
Editor Emeritus
Stella Parks is a CIA-trained baking nerd and pastry wizard, dubbed one of America's Best New Pastry Chefs by Food & Wine. She was the pastry editor at Serious Eats from 2016 to 2019.
Learn about Serious Eats' Editorial Process
(20)
0

I love everything about them, from the tender valleys filled with lakes of melted butter to the crispy ridges left golden and bare. Whether topped with maple syrup or Log Cabin, fruit or fried chicken, every bite is bliss. There is nothing, nothing, I'd rather make for breakfast.

These buttermilk waffles don't taste lazy, though. Nope, these are eggshell-crisp on the outside and incredibly fluffy within. They're also not the least bit cakey, a quality far too common in quick waffles, and one I hate. When I want cake, I'll eat cake.

What do I mean by "lazy"? I have a few criteria. First, no whipped eggs. Also, no wet ingredients here, no dry ingredients there, no foaming, no folding, no sifting—just a truly one-bowl recipe that comes together without any fuss. I've spent my life baking for others, and waffles are a safe, uncomplicated space where I can relax.

My morning moratorium on whipped eggs isn't an artificial constraint or even a concession to second-best, just an honest assessment of what the technique has to offer when it comes to waffles—namely, nothing.

The point of whipped eggs is to modify the density of a batter, entrapping air in an otherwise solid mass of granulated sugar and butter (or what have you). By creating little pockets of empty space in the egg whites, mechanical aeration allows steam and/or carbon dioxide to collect within a batter. In the oven, these gases slowly expand, giving rise to everything from brownies to soufflé.

But waffle batter isn't warmed passively in an oven, it's crushed between two iron plates. The air bubbles in beaten whites add nothing but the clatter of a whisk and an extra dirty dish, certainly nothing that compares to the undeniably locomotive power of steam. See, even without those extra little pockets of air, the steam produced by water in the batter is more than enough to raise the waffles. Because waffles bake in a closed environment subject to direct heat, hydration trumps aeration every time, allowing me to get away with a batter no fluffier than frosting.

My recipe starts with buttermilk and egg whites—no yolks—moisture-rich ingredients that fit my steampunk aesthetic while keeping the batter relatively thick. They're also high in protein yet lean, giving the waffles structure without turning them into cake. It's not that I'm aiming for anything fat-free, only that super-rich batters tend to produce a waffle that's more like a pancake with potholes, all mushy and soft.

Since I'm counting on the moisture, not the acidity, of buttermilk to leaven the batter, I include only a pinch of baking soda. Which, in this context, functions like a seasoning, taming tart buttermilk to a gentle tang without neutralizing it altogether. (For more on that off-label usage, check out my write-up here.)

There's a touch of butter to keep the waffles tender, and enough sugar to promote a golden crust, but not so much of either that you'd feel guilty heaping more butter and maple on top. Last but not least, a generous helping of vanilla bean adds an aromatic note that won't flash off or fade away—an important consideration whenever direct heat is involved.

The batter may not look foamy or light when it hits the iron, but no matter. Baking's all about chemistry—a series of actions and reactions that transform everyday ingredients into something entirely different. If you have any lingering doubts, just consider pâte à choux: a humble wad of flour and egg that bakes into a delicate, air-filled cream puff.

Like profiteroles, my waffles are powered by steam, so it's vitally important that they have room to expand. Aside from creating a horrific mess, overfilling a waffle iron forces the batter to spend its energy expanding out rather than up, simultaneously making it more difficult for steam to escape. The result is a dense and cakey (if not outright soggy) waffle unworthy of the name. So err on the side of too little batter, and don't begrudge those waffles that turn out a little rough around the edges! More often than not, those jagged edges are a sign the batter was given a chance to fully spread and rise.

Under those circumstances, my waffles turn out impossibly light, fluffy enough to sop up everything from runny eggs to maple syrup and gravy, but crisp enough to maintain a good crunch to the final bite.

So stop beating, whipping, or otherwise wearing yourself to a frazzle, and simplify your weekend routine with a no-nonsense batch of buttermilk waffles (and, if buttermilk is hard to find, a blend of Greek yogurt and milk will do fine). Just be sure to heat up your iron well in advance, because this recipe comes together fast.

From size and depth to heat settings and materials (cast iron versus nonstick), waffle irons vary considerably from brand to brand; a small test waffle is a low-risk way to determine how the batter behaves on your machine.

In place of buttermilk, this recipe can be made with a 50/50 blend of plain, nonfat yogurt and milk. You can also make this recipe without the vanilla bean, but the waffles won't be as aromatic. 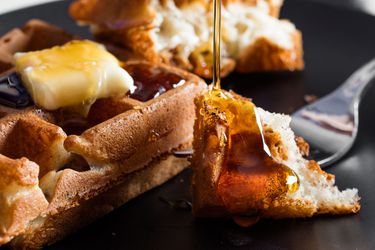