Bulalo—a luscious, meaty soup featuring marrow bones, beef shanks, cabbage, potatoes, and corn simply seasoned with fish sauce—dates back to before the Spanish occupation of the Philippines. It originated in the Southern region of Luzon, one of the archipelago's three major islands, either in the province of Batangas or the town of Tagaytay. Having had the bulalo in Tagaytay in the province of Cavite, where bulalo can be found in most streetside eateries 24/7. I can see why the locals claim it as their own, as it's one of the best versions I've ever had.

Like many other Filipino dishes, this soup uses off-cuts, such as beef hocks and bones, for both flavor and sustenance. But as long as you’ve got the marrow, you’ll have bulalo; part of the dish's allure is sucking the marrow out of the bones. The addition of vegetables like cabbage, potatoes, and corn varies from region to region and eatery to eatery. For example, my birth island, Negros Occidental in central Philippines, has a version of bulalo called kansi, which I consider to be the love child of sinigang, a tart pork and vegetable stew, and bulalo—it’s a sour, bone marrow-based soup flavored with juicy, astringent-tasting batwan, a small, round, indigenous fruit that resembles a green tomato.

My version of bulalo focuses on building a flavorful soup base made by simmering beef shanks with vegetable trimmings, and serving it over roasted corn, potatoes, and marrow bones. While the resulting soup may be subtle in flavor, it's loaded with contrasting textures and captures the essence of the dish.

To make bulalo, I start by building the broth in a large Dutch oven. I brown the shanks in oil, first, then sauté onions and garlic in the fat. When they're golden, I reserve them for the soup, and then make a quick vegetable broth with the vegetable trimmings, after which I add back in the browned shanks, the cooked garlic and onion, as well as the tendon and knuckles. I simmer everything until the meats are tender, then add the cabbage and cook it until it, too, is tender, then I season the broth with fish sauce. About an hour before the soup is done, I roast the potatoes and bone marrow, the potatoes until they're soft and tender, the bone marrow until it's browned and crispy on the surface and just pulling away from the bone.

When the soup's done, I divide the beefy bits among serving bowls, top each one with the potatoes, corn, and cabbage, and ladle in the broth. The result is a soup in which there's a range of textures from the beef and the individually cooked vegetables, all swimming in a comforting soup that can be savored any time of the year.

If your marrow bones don't come pre-cut, ask the butcher to cut them for you.

If you have a stovetop pressure cooker or electric multicooker (such as an Instant Pot), you can use it in place of the Dutch oven or stockpot. To do that, sear the shank first, then add tendons (if using), knuckles (if using), and vegetable trimmings, and cover with water. Cook at high pressure for 1 hour. Once the pressure is released, add the cabbage, cover, and cook until the cabbage is tender, about 10 minutes. Proceed with the recipe as directed.

You can use beef stock instead of water for a more flavorful soup.

Bulalo can be refrigerated in an airtight container for up to 1 week and frozen for up to 6 months. 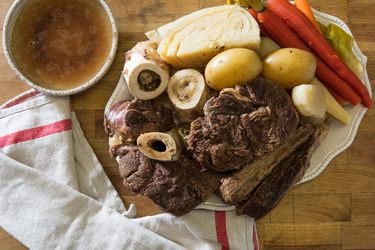 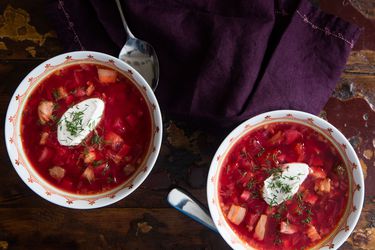 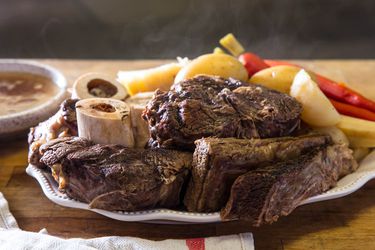 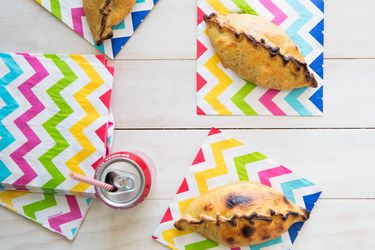