I probably shouldn't admit this, but I have a fondness for that cheesy late-70s Rupert Holmes hit technically called "Escape," though most of us know it as "that piña colada song." It tells the story of a man who, tired of his lady, responds to an intriguing personal ad one night. When he meets up with this mystery woman, it turns out she's none other than his woman. They rekindle their love affair, having discovered important new things about each other—like the fact that they both enjoy piña coladas and taking long walks in the rain.* Who'da thought?

*Another way to summarize the song is that it tells the story of a couple of incredibly shallow sleazeballs who, instead of dealing with their relationship like adults, attempt to sneak around, only to realize just how much they deserve each other.

I've been thinking of this song a lot recently because I've been rekindling a love affair of my own. With amatriciana sauce. For those who aren't familiar, amatriciana is a pasta sauce that, while supposedly originating in Amatrice, is for all intents and purposes a Roman sauce these days. It's made with tomato, guanciale (cured pork jowl), black pepper and/or red pepper flakes, Pecorino Romano, and white wine—though there's lots of argument about what should and shouldn't go into it. (Definitely read Katie Parla's excellent piece on the origins of and contentious debate about this and other Roman pasta classics.)

My infatuation with amatriciana started many years ago, when I was sous-cheffing at a Tuscan restaurant in Manhattan. We'd run it as a special every once in a while, whenever our backlog of house-cured pancetta got too deep. For purists, this alone will signal our departure from tradition: Many say pancetta is not an acceptable substitute for guanciale in the dish. That was just the start of our rule-breaking, though. We also loaded the sauce with garlic and onions (a big no-no, according to many folks) and cooked it for close to an hour, even though it's often made as a quick pan sauce.

Even at that time, I knew we were departing from a strict interpretation of what the sauce should be, but it tasted so good, I didn't care. For heat, I'd punch the sauce up with lots of black pepper. That part, at least, was in line with acceptable practice. Some people argue for chile pepper instead, but I thought the black pepper was the bomb, and backed up my position with evidence that it's historically been an important spice in Roman cooking, and a defining flavor in other Roman pastas, like cacio e pepe and carbonara.

In the intervening years, I've continued to make it from time to time, my extreme fondness leveling off into a more even-keeled appreciation. Echoing the opening line of the "Escape" song, you might say I'd grown a little tired of amatriciana. With my recipe testing for this story, however, I'm thrilled to say that I've fallen back in love with the sauce. And, interestingly, some of my initial thoughts on it have evolved.

I'll walk you through it, piece by piece.

Following tradition, the correct pork for amatriciana is guanciale, cured pork jowl. That presents a problem for a lot of home cooks who live outside of Italy, in places where pancetta, the cured belly, is easier to find. So just how important is the guanciale here?

This is a question I've tackled before in another Roman pasta dish—carbonara. With carbonara, I found subtle differences between guanciale and pancetta, and concluded that either is a good choice. The guanciale, a cut that has far more fat than lean muscle protein, produced the most unctuous carbonara, with a hint of warm spices from the cure. Pancetta, meanwhile, offered the cleanest pork flavor. (I also tested smoked bacon in that dish and enjoyed it, too.)

But in the carbonara recipe, I diced the pork, while in amatriciana, I like to leave it in larger chunks. Plus, the sauces are different: The former is egg-based, the latter is tomato-based. Turns out, these differences matter. Size...ahem...in particular. The extra lean muscle in pancetta is more noticeable when the meat is cut into larger pieces, firming up as it cooks and developing a tougher texture. Fatty guanciale, meanwhile, maintains a much more tender bite. I also found the guanciale's warmer spice flavor less noticeable in the tomato sauce than I did in the eggy carbonara.

One big point, though, is that after all my tests for both amatriciana and carbonara, I've started to realize that there's often a bigger quality difference within any one type of cured pork than there is between them. Meaning: There's a much bigger difference between a poor-quality pancetta and a high-quality one than there is between a good pancetta and a good guanciale.

The bottom line is, if you can find good guanciale, you should use it for amatriciana, but if good pancetta is all that's available to you, it'll work, too. I'd go so far as to say, even though it will offend many, that I'd sooner make an amatriciana-like sauce with really good smoked slab bacon than with that thin industrial pancetta that comes presliced in plastic packages. The bacon's smoky flavor definitely wouldn't be typical of the sauce, but I'd take it over those shriveled shreds of crap pancetta any day.

Next up, the question of whether aromatics like garlic and onion belong in amatriciana sauce. I've included them for years, convinced they're good. I mean, when do onion and garlic make anything worse? Still, I tested it out, making three batches of amatriciana: one with no onion or garlic, one with thinly sliced onion and garlic cooked with the guanciale, and one in which I lightly browned large pieces of onion and garlic in the oil and then discarded them before adding the guanciale.

This was the first test that began to shift my thinking on amatriciana, leading me to fall for it all over again. Here's why: As I cooked these versions of the sauce side by side, the real charm of amatriciana sauce became clearer to me than it's ever been before. What I realized is that one of its most important qualities is the interplay of the bright, sweet-tart tomato sauce and the rich, fatty pork, all of that bolstered by a slight spiciness and the sharp, salty tang of aged Pecorino Romano cheese.

Garlic and onion, however, when cooked into the sauce, add a sweet, aromatic edge that quickly starts to dominate. It's not bad—I won't go that far—but it does distract from the more interesting interaction between the pork and the tomatoes. I'll still enjoy an amatriciana made with onion and garlic, but it's no longer my default. I'd rather leave them out to focus attention on the sauce's more primal elements.

As for browning larger pieces of onion and garlic in the oil and then discarding them, I found very little flavor difference compared with the sauce that had none at all.

It's Gettin' Hot in Here

Now for the heat. Amatriciana needs to be a little bit spicy, and authorities are divided on whether that heat should come from black pepper or from chile peppers. I've always been firmly in the black pepper camp. First, because it's a spice that has deep roots in Roman history and defines two of Rome's other classic pastas—carbonara and cacio e pepe. I must also admit to geekily liking the idea of a pasta triumvirate that mirrored the ancient Roman political one, each spiked with hot, aromatic black pepper and briny pecorino, but separated by some of their other ingredients.

I also really like the freshly ground black pepper's bewitching musky scent. Or at least I thought I did. The problem here, I've come to see, is about quantity: In order to add sufficient heat with black pepper alone, you have to add a lot of it. And when we add a lot of black pepper, we run into a problem similar to that of the onion and garlic, namely, that it distracts from one of the most compelling elements of the dish—the interplay of fatty cured pork and sweet-tart tomato sauce.

In my side-by-side tests, I vastly preferred the amatriciana in which the substantial source of heat was chile flakes and the black pepper was added in smaller doses to act as an overtone.

Time for a Quickie?

Last, the cooking time. Many recipes, including the one signed off on by the town of Amatrice, describe amatriciana as a quick-cooking sauce: Cook the guanciale, deglaze with white wine, add tomatoes, and simmer just long enough for it all to come together. Following this method, it's done in a matter of minutes. But in a few other recipes, including Marcella Hazan's and the version given in Italy's classic Silver Spoon cookbook, the sauce is simmered for anywhere from 20 to 40 minutes.

Since I've switched over into the no-onion camp, that means I can also become a member of the quick-cooking crew. Frankly, once again, I think this helps the sauce, since the shorter cooking time preserves more of the tomato's fresh fruity flavor, enhancing the contrast between it and the fatty cured pork.

Amatriciana, I now believe, is all about contrasts. It's literally the pasta sauce version of the old adage that says opposites attract.

To make amatriciana, I start by heating olive oil in a skillet or sauté pan. If you want to brown half an onion in it, you can, though you don't need to. Then I add the guanciale (or, alternatively, pancetta) and pepper flakes and cook the pork until it's slightly crisped and browned. White wine halts the browning and deglazes the browned bits on the bottom of the pan; I cook it down until it's almost all evaporated.

Then I add whole canned tomatoes that I've crushed by hand, along with all their juices. I like the texture of the little bits of tomato left behind by hand-crushing here, but puréeing the tomatoes with a blender is also an option if you want a silky-smooth sauce.

I let the sauce simmer very gently while I boil the pasta. I'm using bucatini, thick spaghetti with a hole through the center of each noodle—a traditional choice, but spaghetti or even penne is a fine substitute. When the pasta is just shy of al dente, I transfer it to the sauce and add a good splash of the pasta cooking water. The starch in the cooking water helps emulsify and bind the sauce.

I cook the pasta in its sauce, following the standard pasta-saucing procedure, stirring it rapidly over high heat as the pasta finishes cooking and the sauce thickens up.

When it's ready, I add grated Pecorino Romano cheese off the heat, along with freshly ground black pepper to taste. Then it's ready to serve, with more cheese sprinkled on top.

Amatriciana, I thought I knew you...but now, I really do.

Guanciale (cured pork jowl) will give the sauce the best texture, but if your best option is good pancetta, use it instead.

Bucatini is a type of thick, hollow spaghetti; you can substitute regular spaghetti, or even penne. 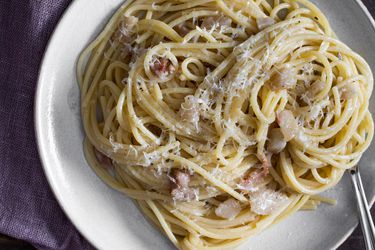