This one-skillet side dish combines the best of several worlds—Greek lemony roasted potatoes and potato gratin, all topped with browned and melty halloumi cheese.

The Greeks do potatoes right.

Often in Greek cooking, you'll find slices of lemon-drenched potatoes slowly roasted in the juices of whatever meat is cooking alongside, absorbing those deeply flavored drippings. The result is something that's at once crispy and soft. There are several variations on this basic theme, such as patates fournou, with garlic added, and patates ladorigani, abundant with oregano.

I’ve always thought that this Greek approach to potatoes would make a sublime base for a gratin. Although there’s no dairy in the Greek recipes, they magically merge all the right notes of creamy mashed potatoes and faultless French fries. I could only imagine that adding a squeaky layer of halloumi cheese on top would bring these potatoes to mythological levels.

My challenge was that I was dead set on making the recipe work using the broiler—traditionally, Greek potatoes are slow-roasted, but the broiler doesn't really do "slow" at all.

The key to success is twofold. First, unlike with roasted potatoes, which I'd cut into larger chunks, I use thinly sliced Yukon Gold potatoes for this recipe, which cook through more quickly. But second, to ensure success, I also broil the shingled slices in only a single layer, leaving the whole thing thin enough for the heat to quickly penetrate and cook the potatoes.

With that small problem solved, all that remains is to focus on the crowning achievement of a gratin: the top. That firm yet supple layer protects what’s underneath, while offering its own unique character. It’s the most coveted part of a gratin, without exception, and don’t you dare tell me otherwise. Luckily, the broiler is more than up to that part of the job.

I start the recipe by coating the bottom of a cast iron skillet with a slick of olive oil—just enough fat to keep the dish from feeling too starchy, but not so much that it comes across as greasy. On top of that, I add my shingled layer of potato rounds and a seasoning of salt and pepper.

Into the broiler it goes, until the potatoes are evenly cooked and browned on top, like diner home fries fresh off the griddle. I then add a good glug of lemon juice to the pan, which not only adds needed brightness to the dish but also provides enough water to steam the undersides of the potatoes, delivering that creamy texture below the crisp top.

The lemon juice also helps form a pseudo pan sauce that's tangy and rich, just like one you’d expect to see with roasted meats. A flourish of lemon zest on top adds aromatic citrus oils that release with the quick blast of high heat.

Instead of flambéing the halloumi at the table, as one does with saganaki (the Greek appetizer of flaming fried cheese), all I need is my trusty broiler. I lay the cheese on top of the potatoes, return the pan to the broiler, and, much as with the potato, let the cheese warm through as it browns—no need for pyrotechnics. I finish it all off with a dusting of floral dried oregano. All you need now is some roast meat to go with it. 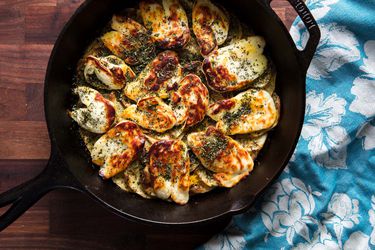 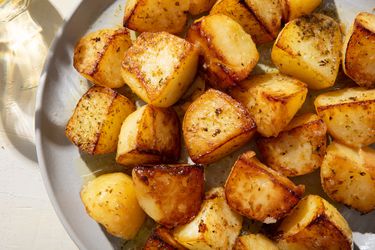 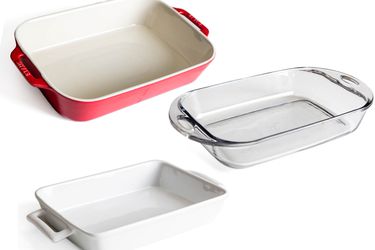 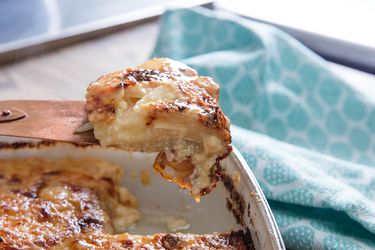 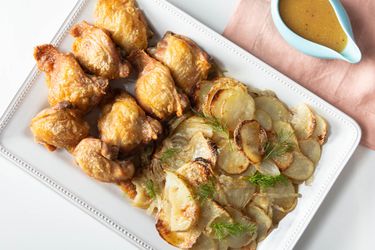 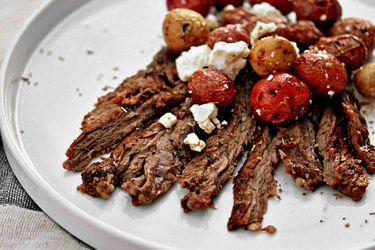