Buttery clams with burst tomatoes and fresh herbs, ready in minutes with the power of your broiler.

I love a good grill out; the wafting smell of hardwood charcoal, food imbued with smoke, summer days savored al fresco. Here’s the thing: there’s the bucolic ideal, and then there’s the reality of New York City’s dog days, which are too hot and sweaty to even fathom laboring over a Smokey Joe.

Taking that into consideration, I’ve been looking for ways to cook indoors just as I would outdoors—without heating up my apartment by running the oven or blasting burners on my stove top. That got me thinking about the broiler. In a way, it's like an inverted grill, emitting single-sided heat that comes from above instead of below. And unlike the oven, the broiler is mostly effective due to its intense heat and proximity to the food. For many broiling tasks, there's no need for a lengthy preheating session. Just position the rack close to the broiler, wait a couple minutes for it to fire up, and then slide your food under it. In and out, most dishes are done in just a few minutes, long before your kitchen starts to swelter.

As I've played with the approach over the past couple months, I've realized just how wide a range of dishes can be prepared in the broiler, and over the next several weeks I'll be sharing them with you, from flatbreads and gratins to steak and vegetables. To start off, let's look at my recipe for broiled clams. Aside from the time it takes to prep all the ingredients, the actual cooking happens in mere minutes.

Before cooking the clams, though, they need to be purged of any sand; some clams come to you free of sand and thus don't require a purging step, but since there's no way to know this without purging them first, purge you must. Submerge them in a cold saltwater solution similar in brininess to the ocean (that's about 3% salinity, though I just do it by taste), and give them about twenty minutes to spit any grit out, then repeat. Once you find no trace of sand in the bottom of the bowl, you can halt the purging process, even if it was after the very first purging cycle (a sign that they were free of sand to begin with). Sometimes it takes several changes of water before you get there. You never know.

Once I've made sure there isn't any sand in the clams, I start by putting some garlic and olive oil in a cast iron pan and slide it under the broiler until the garlic starts to brown. Next, I add grape or cherry tomatoes and put the pan back in until they begin to burst. The tomatoes add a fresh element that plays against the clams brininess, sort of like the way cocktail sauce complements a raw-bar platter.

After that, I add the clams, along with some vermouth and a pat of butter, then it all goes back into the broiler again until the clams pop open; I flip and baste them once or twice along the way to speed things up, just until they all open and are warmed through. Even though the broiler is like an inverted grill, one key difference is that here we have the pan holding everything in place and catching the juices that in turn help cook the clams.

There are few food flubs that sadden me more than overcooked clams. The tricky part of cooking clams is that they have a small threshold of being just right. Just like showing up to meet a friend on time, you really only have a sixty-second window before you're late—clams go from perfectly tender to rubbery in about the same time.

Having spent years living and cooking in New England, I’ve had my fair share of clams. I’ve found that the sweet spot is right where the clams are almost still raw, but heated-through enough to seem cooked (and also enough that they pop open to give up their goods). Finding this balance is a triumph.

When the clams are cooked, I hit the pan with a generous handful of fresh tarragon, which pairs perfectly with the acidity and sweetness of the tomatoes, the briny clam broth, and the botanicals in the vermouth.

After you’ve eaten all the clams and sopped up much of the broth with some crusty bread, you can up-cycle the remaining broth by removing whatever shells are left and adding another knob of butter. Pour the broth and butter back into the cast iron pan and reduce it all a little bit more. This can handily become a decadent sauce for linguine with, or without, some more clams. 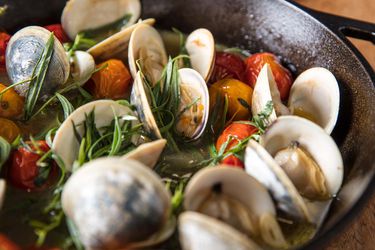 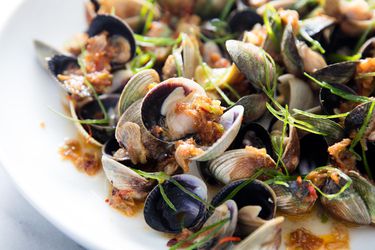